The families of Army Special Forces soldiers at Camp Bull Simons, Florida are at their breaking point after years of not having adequate or affordable child development centers. 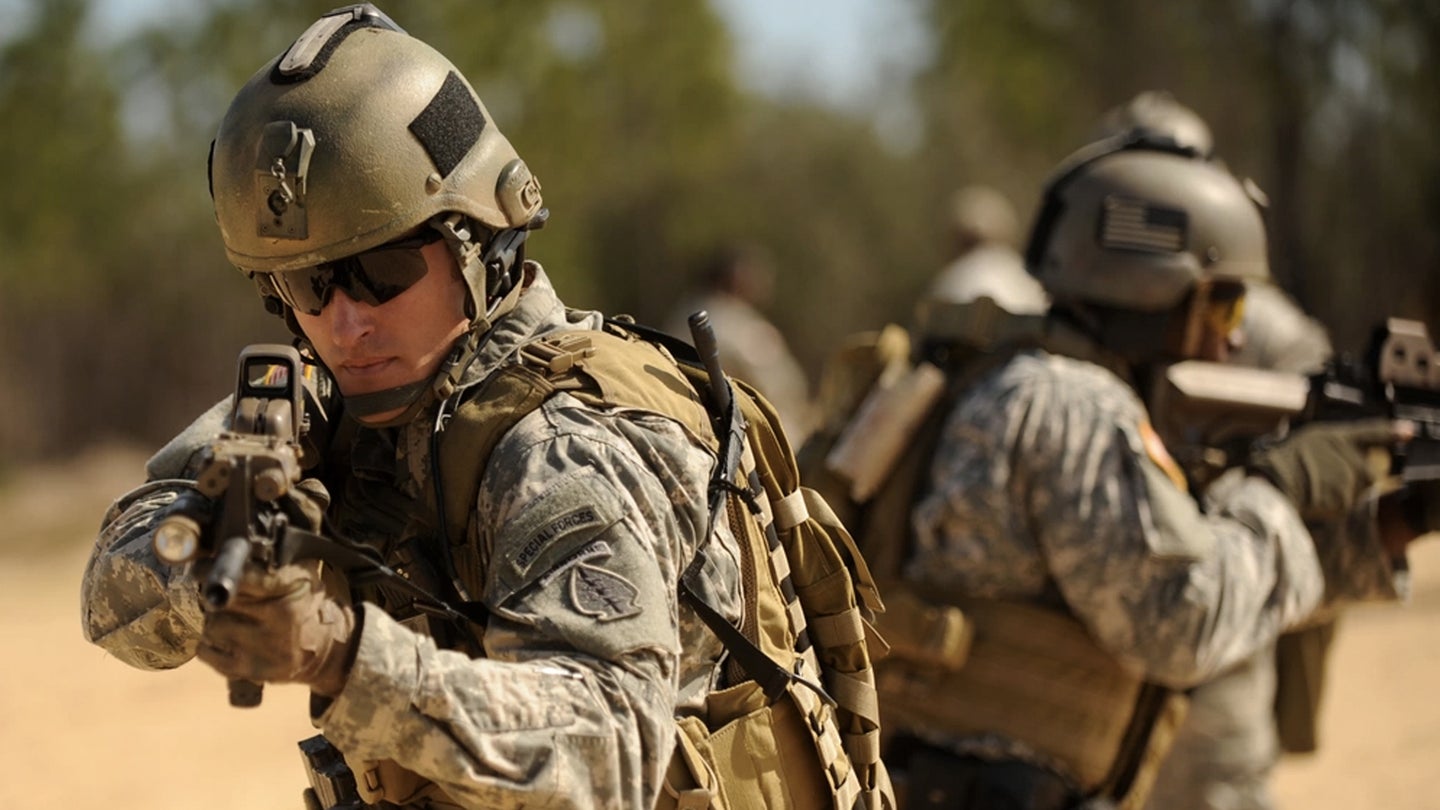 The families of Army Special Forces soldiers at a small camp in the Florida panhandle are at their breaking point after years of not having adequate child care within a reasonable distance of their base, according to Special Forces advocates and lawmakers.

To make things worse, families and advocates say that the commanders of Eglin Air Force Base, Florida, which oversees Camp Bull Simons, will not give the camp permission to build a daycare facility on the compound for what advocates consider to be bogus reasons. The situation has caught the attention of members of Congress who are now pushing the secretaries of the Air Force and the Army to explain themselves at a briefing to be held no later than Dec. 1.

“The stories are heart-wrenching, and the impact this is having on both families and readiness is unacceptable,” wrote Florida Sens. Marco Rubio and Rick Scott in a July 12 letter to Army Secretary Christine Wormuth and Air Force Secretary Frank Kendall. “The lack of urgency and failure to understand the depth of the impact this is having on our operators is growing increasingly frustrating for us and our constituents.”

Like many Special Forces Groups, the 7th Special Forces Group (Airborne) deployed “nonstop” to Afghanistan in support of Operation Enduring Freedom since 2002, according to an Army press release. In 2011, the group moved from Fort Bragg, North Carolina to Camp Bull Simons, which is located on the Florida panhandle about 20 miles north of Eglin Air Force Base. Though Eglin and Bull Simons are two separate facilities, Eglin oversees its smaller cousin, which includes about 50 structures and employs more than 3,000 service members and civilians, according to the Senate report for the 2023 National Defense Authorization Act.

Most of those service members live in the city of Crestview, which is about 15 to 20 minutes north of Camp Simons and is the “only affordable off-post housing option” for many enlisted troops, according to a white paper written by the CDC Action Group, which advocates for a childcare center at the installation. There are more than 450 children in that area up to four years old who do not have access to a CDC, or child development center, said retired Col. Stu Bradin, president and CEO of the Global SOF Foundation.

Unfortunately for service members at Camp Bull Simons, there is no child development center. The nearest CDC is at Eglin, about 45 minutes south of Crestview, advocates say. The waitlist for that center is years long, and the few families who make it into the center have a hell of a drive to deal with every day — as much as two hours a day there and back — which often means they have to leave work early and run up a huge gas bill along the way. There are also few private childcare centers in Crestview that qualify for the Army’s subsidized childcare program, the white paper read.

“Families are effectively denied the ability to use a CDC given the distance and length of time it takes to reach those on Eglin’s main base,” retired Special Forces officers wrote to Rubio, Scott, and Florida Rep. Matt Gaetz in June. Apparently, this has been a concern since the 7th Special Forces Group moved to Camp Simons roughly a decade ago.

“I clearly remember leadership representatives from [Eglin] highlighting the services offered to our families,” retired Col. Robert Connell, a former deputy commander of the 7th Special Forces Group, wrote in the letter. “Critical amongst these was CDC access – a key concern of many that were considering the move.”

In 2016, Connell was shocked when he learned that CDC access remained a problem, considering that the Air Force guaranteed CDC support no matter where the soldiers lived, he said in the letter. Though Green Beret families have repeatedly raised the issue to Eglin, the base’s “leadership has responded with repeated promises and inadequate solutions,” Connell said. “One recently consisted of building a third CDC on the main base.”

With no other options, Connell turned to Congress in the hopes that legislation can fix the issue, and he seems to have found a sympathetic audience.

“When we fail to deliver for our service members, lethality declines, quality of life drops, morale plummets, and retention rates fall,” Rubio and Scott wrote. “Further, we have recently learned of the alarming decline in recruitment, which is to be expected when the Department of Defense continues to fail our service members and their families.”

The leaders of Eglin say that there’s a good reason why they refuse to allow a CDC to be built at Camp Simons: There’s a bombing range near the installation where the 96th Test Wing experiments with advanced munitions.

“The 96th Test Wing commander has been in consultation with 7th SFG leadership over several years,” Andy Bourland, director of public affairs for the 96th Test Wing, told Task & Purpose. “There are several options that have been and are currently being considered. However, we do not believe that putting a CDC on an active bombing range at Eglin Air Force Base is an acceptable risk that commanders are willing to accept.”

Indeed, there is a bombing range near Camp Simons, but one of the retired Special Forces officers, Col. Stu Bradin, said the range is rarely used. He also pointed out that Camp Simons already has a barracks, a chapel and a shopette where soldiers regularly gather with their families. He and other advocates argue that Eglin’s claims of safety concerns due to the bombing range have no meat to them, and members of Congress seem to share those concerns. The Senate Armed Service Committee’s report on the 2023 NDAA directs the secretaries of the Army and the Air Force “to provide a briefing not later than December 1, 2022” on the process for requesting and approving military construction; a review “of what constitutes public safety in relation to training range space” at Camp Simons; copies of whatever paperwork allows the Air Force to build barracks at the camp despite it being near an active bombing range; a description of the risks to children and a review of how the services are working towards a solution.

“While the committee shares the public safety concern, no evidence has been provided to the committee showing that such a concern exists and how the Air Force applies said concern equally to all public activities surrounding the range,” senators wrote in their report. Bradin was even more direct in his assessment.

“It is complete bullshit about not allowing anything in the ‘range’ area,” he said. “The Air Force has no risk mitigation and that is why Congress wants to hear their briefing.”

The Army seemed to take a similar stance in a January briefing Bradin provided to Task & Purpose.

“There are no hazard areas overlapping Camp Bull Simons,” wrote an Air Force employee summarizing the Army’s position in the briefing. “In over 10 years, CBS has never had to evacuate.”

The Air Force has proposed solutions to the lack of a CDC at Camp Simons, including a “Wellplex” campus in Crestview which the Air Force said in a January briefing will include a “KinderCare Education Center” for 250 children and which they believe could be opened by spring, 2023. Another solution is to partner with nearby private child care facilities.

“We believe that the civilian options being considered nearby are acceptable and can easily accommodate the number of children that would require the services of a CDC to support the 7th Special Forces Group,” Bourland, the spokesperson for the 96th Test Wing, told Task & Purpose.

But advocates and lawmakers have raised concerns about whether those options are viable.

“While we are grateful for the temporary solution of partnering with two private childcare facilities in Okaloosa and Santa Rosa Counties, one of these facilities will not be operational for some time,” read their letter to service secretaries. “The other is nearly an hour drive, each way, from the 7th SFG compound.” Neither facility can meet the community’s demand, they wrote.

It’s a tough spot for families at Camp Simons, as evidenced by the more than 500 service members and family members who showed up to a video teleconference held by the CDC Action Group earlier this year.

“I have met with and heard hundreds of stories about these younger enlisted having to make financial and career decisions due to a lack of a CDC,” Bradin said in the June letter to Rubio, Scott and Gaetz.

One woman who knows the frustration felt by people stationed at Camp Simons best is Molly Tobin, a family advocate for the 7th SFG. As the leader of the soldier/family readiness group for the unit’s 3rd Battalion and as a Special Forces spouse, Tobin has helped care for families for the past five years, and she said one of the most “dreaded” concerns families face when assigned to the unit is childcare.

“As a critical resource for the families, childcare is a subject that is met with frustration and sadness as we are unable to confirm that it will be provided for these families who sacrifice so much with a career consisting of a high [operational tempo] and long hours,” she said in the letter to Rubio, Scott and Gaetz. “Securing childcare for our [special operations forces] families is a responsibility that cannot be ignored or delayed any further as it is directly tied to the mental and emotional health of our service members.”