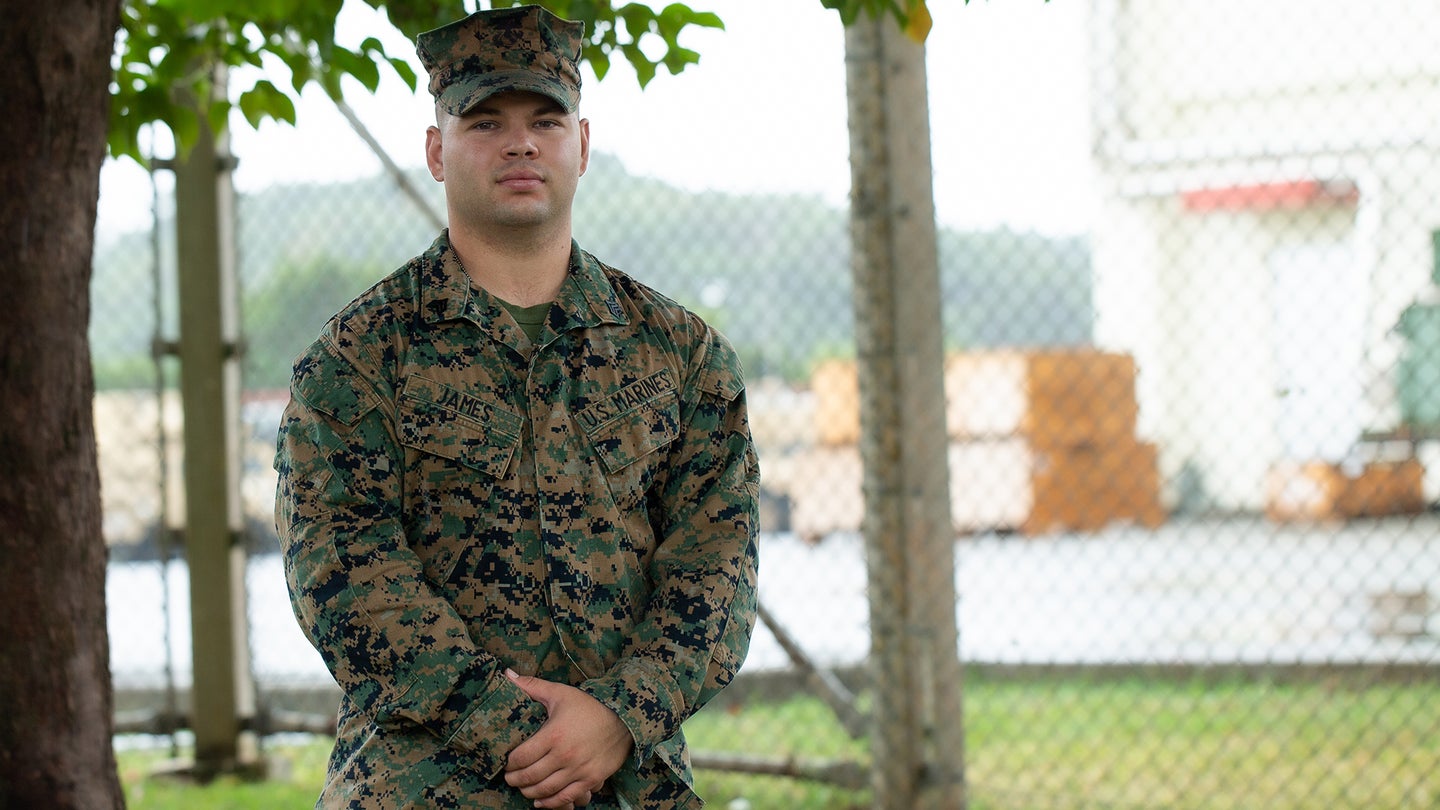 After an elderly woman was bitten by a venomous snake in Japan a U.S. Marine armed with medical training and a belt intervened and saved her life, according to a Marine Corps news release.

While cooking out with friends on Nov. 6 in Kin, a town in the Okinawa Prefecture of Japan, Marine Sgt. John James heard a commotion.

“We were grilling burgers and hot dogs at the saloon bar, and suddenly we heard an elderly woman screaming in a language we didn’t understand,” James, a motor vehicle operator with Combat Logistics Battalion 31, said in the release. “We didn’t know what was wrong until she started screaming out ‘habu, habu.’”

Habu is a species of viper found in Okinawa, and a danger to humans if bitten.

While the saloon owners called emergency services, James sprung into action. Using a friend’s belt, he found the bite marks and fastened a tourniquet two inches about the wound, thanks to the training he received while on Marine Security Guard duty at U.S. embassies.

Once the authorities arrived, they quickly found the snake, and after identifying it were able to get their hands on the correct anti-venom to treat the bite. James’ quick action is credited with saving the woman’s life.

“I didn’t know if I was ever going to hear from her, but I just talked to her this past weekend, and she’s doing really well,” James said. “I think she went back to work about two to three days after the incident.”

According to an informational pamphlet from the Okinawa Prefectural Government, the Habu viper is generally dormant during the day, sleeping underground in holes, though it emerges as the sun sets. If bitten, it’s recommended that you confirm that it was actually a Habu, and if so, immediately call for aid and head to the hospital. If medical care is a ways off, the pamphlet suggests wrapping the wound with a piece of cloth and tieing a knot in an area closer to the head than the bite. The knot should be just tight enough to slow the flow of blood and should be loosened once every 15 minutes.

Okinawa is home to 24 snakes, eight of which are venomous. Four of those are Habu, and each one poses a serious threat to people. And, for a fun fact, it turns out that the Habu viper is also used as a key ingredient in a snake saké called Habushu.

As for the viper’s fate, the press release was mum on that front. But I’m going to venture a guess that if it didn’t slink away, it probably ended up regretting tangling with a Marine, seeing as they frequently lop the heads off snakes and drink their blood. And no, this isn’t propaganda written by the Corps, it’s actually a part of jungle survival training that takes place in Thailand every year and frequently draws hate mail from animal rights groups like PETA.

This isn’t the first encounter the Marine sergeant has had with snakes.

“I was bit by a bull snake when I was four or five,” he said of his childhood growing up on a small farm in Dubois, Nebraska. “At the time, I was more angry than scared.”