It's a reminder that extreme talent can come from the most unexpected of places. 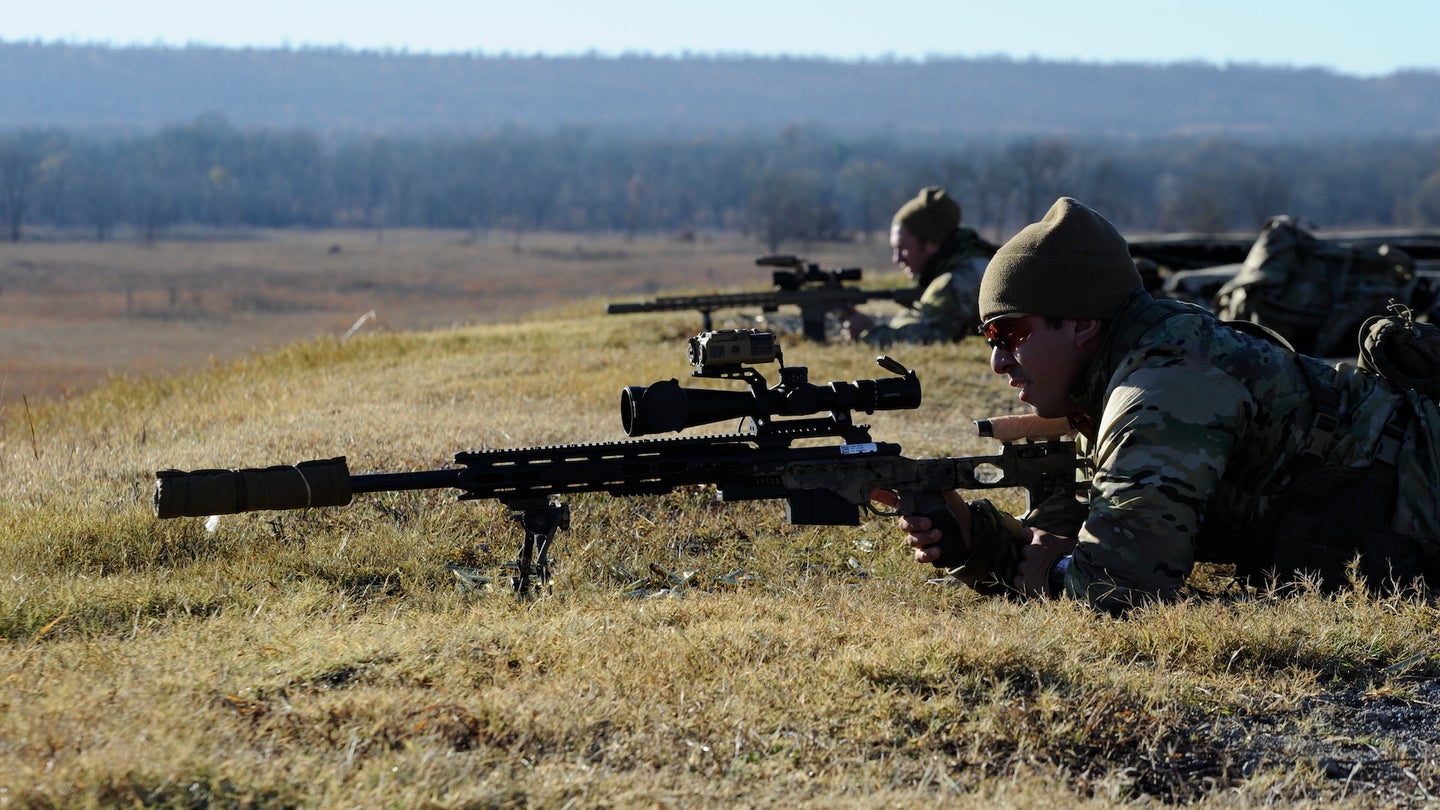 Side by side the sniper teams remain calm and composed as they orient and strategically work together to attain their targets located at Fort Chaffee Arkansas December 5, 2020. (U.S. Army National Guard photo by Sgt. Israel Sanchez).
SHARE

The U.S. military’s various special operations forces have a reputation for being the cream of the crop when it comes to waging war across the world, and it stands to reason that the service’s top SOF marksmen are up there with the legendary and beloved Marine scout sniper when it comes to long-range precisions fires.

Well, forget that: According to a recent set of sniper competitions, some of the best marksmen in the U.S. military are in the National Guard.

During the AFSAM competition, California National Guard Staff Sgts. Demetrios H. Iannios and Eric J. Vargas came in with the top score of 625.5, narrowly beat out Green Beret snipers from the Special Warfare Training Group (Airborne) Team and Marine Raiders from the U.S. Marine Corps Marine Raider Training Center with their respective scores of 500 and 455.

Coming in second was the team of Sgt. Triston Ivkov and Spc. Max Miller of the Colorado National Guard, which came in first during the WPW competition with a score of 546.5 points and place second overall behind Iannios and Vargas.

In third place came the team consisting of Iowa National Guard Spcs. Aaron M. McAndrews and Kyle R. Thies placed with a score of 504, which they racked up after placing second in the WPW competition and third place overall.

In addition, a team from the Utah National Guard placed third in the WPW competition and fifth place overall with a score of 480, just behind the SWTG (A) team and ahead of the Marine Raider team.

For contrast, a team of snipers from Fort Benning’s own sniper school only came in tenth place with a score of 430.5.

The competition consisted of multiple shoots across various courses with names like ‘Whack A Mole’ and ‘Shoots and Ladders,’ and each sniper team was judged by several verifiers through binoculars.

Each team was judged based on several sniper doctrinal tasks: the ability to successfully engage targets of known and unknown distances with a sniper rifle and carbine; the ability to engage moving targets at varying speeds and distances; the ability to move into position, deliver a shot, and exfiltrate undetected; and the ability to engaged targets with sidearms “from non-traditional positions, in and around stationary barricades and structures.”

This means that the National Guard teams from Colorado, California, and Iowa didn’t just beat out Green Berets and Marine Raiders in terms of raw precision fires, but maneuvering into and out of position and engaging various targets with other small arms as well — a major testament to their skill and versatility.

“The National Guard Marksmanship Training Center, as the home to the chief of the National Guard Bureau’s marksmanship program, tries to ensure that each member of his Army and Air National Guard is fully capable of employing his/her assigned weapon,” NGMTC commander Col. Andy Bussell said in a statement lauding the Guardmens’s performance in the competitions.

So, to be clear, a team of Green Berets, among the most elite troops in the U.S. military, absolutely got their asses handed to them by not just one, but three separate teams of part-time snipers from Colorado, California, and Iowa.

That the National Guard teams managed to trounce their “elite” colleagues in SOF formations shouldn’t be that surprising, to be honest; if anything, it’s a reminder that extreme talent can come from the most unexpected of places. After all, if the Coast Guard can produce better snipers than the Marine Corps, then anything is possible.