An Interview With The Comic Mastermind Behind ‘Terminal Lance’ 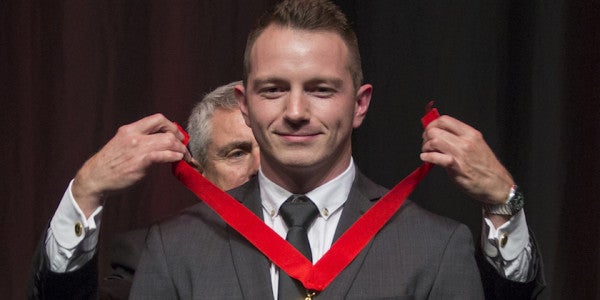 Long March: How closely does the comic strip resemble your own experience in the Marine Corps?

Maximilian Uriarte: The comic is obviously exaggerated and cartoony humor, but inspired by real life as a miserable infantry lance corporal. Since day one, I’ve stuck by one rule that I continue to live by when I make comics: Never get motivated. It’s easy to get nostalgic after the fact, but I remember how miserable it was being active duty and draw from that.

LM: Were you actually infantry, or are your comments on the infantry life those of a close observer?

MU: I was an 0351 infantry assaultman by MOS. During my first deployment to Iraq I was made the lead convoy turret gunner on our MRAP, using a .50 cal machine gun. I was selected personally to practice combat art and photography during my second deployment in 2009, but my MOS never changed from 0351.

LM: What are your feelings about the Corps now? Are you glad you joined?

MU: As I said in my guest of honor speech at the MALS-13 birthday ball in Yuma I November: I never really loved the Corps, but I absolutely love Marines. Lance corporals are my favorite people in the planet for their humor, ingenuity, and imagination. They never stop entertaining me even today with their countless videos and photos they send over to me.

For myself, I am glad that I enlisted in the end, it was a big part of my character development and I learned a lot in those four years. I don’t know if I ever found what I was looking for, but maybe that was the point.

For what it’s worth, the Corps itself has been great to me over the years. The support from both the ranks and the command has been amazing, and I’ve found a lot of fans in places I never would have expected. I clash with them sometimes over trivial social media-related things, but it’s never been detrimental.

LM: What is your favorite Terminal Lance of all time?

MU: It’s tough because I try to strike a balance between humor, depth of message, and artwork. As an artist, my favorites tend to be the ones I enjoy the artwork of, which has evolved drastically over the years. My all time favorite strip (if I had to pick) resonates to The White Donkey, which is “Terminal Lance #175: Back Home.” I like this comic because of the poignancy of it, while still being somewhat tongue in cheek in its humor.

A more recent favorite of mine is “#442: Bootcamp: The Care Package,” which shows the more modern look of the comic and (I think) is hilarious. It has no larger point, but it’s funny and looks great.

LM: What are you up to now?

MU: I’ve got a lot of things in the air right now, some TL-related and others not. I moved to Los Angeles to get started in TV and film. Things are moving, but Hollywood is Hollywood and nothing is happening until it’s happening. I keep it all close to my chest because I am looking forward to surprising my audience when the time comes.

In the immediate future, I am beginning work on my next graphic novel, set in Afghanistan. I am also writing and directing an animated short that I hope to reveal shortly after it’s finished, though I can’t say much more than that yet.

In the next couple of months, Little Brown will be releasing the Terminal Lance Ultimate Omnibus, which we have been putting together over the last few months.

LM: You didn’t tell them they can buy it on Amazon now. So I will. Have you ever thought of writing about your civilian life?

MU: Of course! I don’t plan on doing military work forever. I actually had a really different, non-military book lined up for my next graphic novel, but my publisher really wanted me to follow up The White Donkey with something in that ballpark. I have about 10 feature-length story ideas right now that I want to tackle as books and movies in the future, most of which have no military relation.

My next book will be military but also a fresh departure for me, similar to The White Donkey, but bigger and bolder. I’m excited about it and look forward to announcing more in the near future.

LM: What do you read about the military nowadays?

MU: I mostly just keep up with the usual guys from Military Times, Task & Purpose, and the niche Facebook pages. Most of my insight comes directly from Lance corporals in the Corps, since I get hundreds of messages on Facebook and Instagram daily.