‘These are the stories we tell each other’ — Vets, service members, comic book artists team up to create ‘True War Stories’

These are the war stories we need more of. 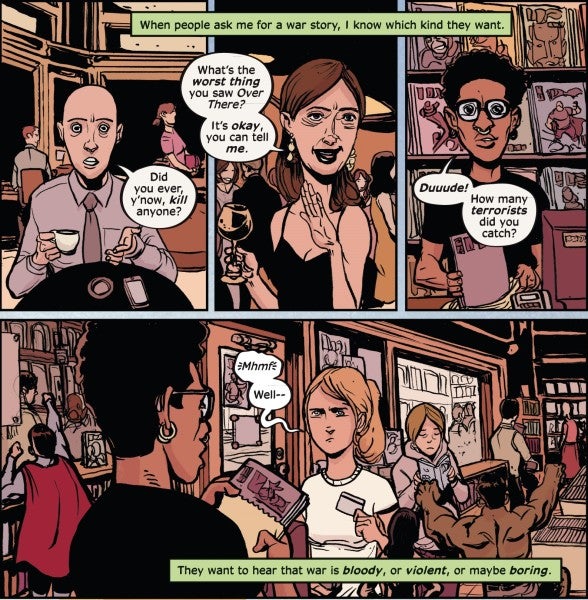 Someone once told me that “if it ends in laughter, then it's not a real war story.”

The message was clear: A real war story is violent, brooding, and unforgiving. It has to be delivered with a thousand-yard stare, and sum up why the teller looks so angry or inconsolable all the damn time.

If it's not fit for a film adaptation starring a square-jawed leading man kicking in doors and stacking bodies, then it's just not a war story.

It's the other stories — the ones you tell your buddies in the smoke pit, while on post, or over beers years after you've gotten out and gotten fat. They're the ones that keep you sane in spite of all the terrible things that can and sometimes do happen during deployment. Those stories are just as real.

That's what makes me so excited about True War Stories, an upcoming comic book anthology of 15 stories from veterans and service members spanning generations and wars.

Based on a sampling of stories that Z2 Comics shared with Task & Purpose, no two are alike, with each able to stand on its own as a sort of illustrated memoir — a sea story brought to life with a dash of color and some well-placed thought, or word, bubbles.

“Khai and I adapted them to the comic script, with heavy involvement from the soldier writers from the adaptation through every stage of art and lettering,” de Campi told Task & Purpose.

“We made a really big effort to get everything as accurate as possible, and our writers really went above and beyond in terms of giving us their photos of events and also finding accurate photo [references.]”

In terms of plot and tone, the stories run the gamut from funny to embarrassing, while others are introspective or remorseful. But they're also human and relatable — more self-deprecating than self-serving.

“We strongly avoided directing our authors in how they chose to tell their story,” Krumbhaar, an Iraq War veteran who served 12 years in the Army, told Task & Purpose. “Even when it would have been easier to ask them to cut down a lot of what they gave us, we worked to find a structure where their whole story fit.”

“As a result of this soldier-led editing, we have a really organic mix of stories,” Krumbhaar said. “Some are somber and melancholy, some are very action-adventure, and some even edge towards magical realism.”

There's the bromance of insanely bored soldiers, and the gut-wrenching fear that comes when one thinks he may have lost the only friend who makes a year-long stint to the sandbox bearable; the herculean struggle between a squad of soldiers in Iraq and the legion of rats who are hell-bent on eating their precious store of macadamia nut cookies; and the tale of an airman and his military working dog who defended a fuel point during the Vietnam War against an enemy sapper.

With depictions of war-time service frequently boiled down to combat and nothing but, it's refreshing to see a mix of experiences reflected in a medium that's often synonymous with flashy heroics.

“I think everyone but veterans will be surprised by the stories in this book,” Krumbhaar said in a press statement. “These are the stories we tell each other, and I’m excited for everyone to get the chance to hear them the way we do.”

That comic can be read in its entirety, below:

“To me, what I really liked about being in the military is the storytelling aspect,” Moores told Task & Purpose. “You have all this time on your hands. You’re sitting around and all you can do is tell stories all the time.”

That story, in particular, he added, “is a story about storytelling.”

“I’m locked in the bowels of the ship, so my recollection of that event is really what other people are telling me,” he explained. “I think it’s interesting to see the ways stories come together, and the ways a story grows as each person contributes to it.”

“I chose to tell a funny story because from my perspective as someone who doesn’t want to glorify war, that’s why those stories are important,” he explained.

“I think we should talk about our service, but I don’t want to be one of those guys who talks about how badass or how cool combat is. The humor aspect of it all is more important to me.”

Because it's an anthology, True War Stories seems well-positioned to challenge the idea that there's only one kind of war story.

Though other artists from current and past conflicts have helped move the ball forward in recent years by offering a fresh look on combat and service, free of the bravado and theatricality that tends to dominate the genre, new endeavors and collaborative works, like True War Stories, might help keep that trend going.

There's no final word on what it all means, just a sampling of different perspectives, served with a side of honest reflection and a hefty portion of dark laughter.

And that's something we need more of.

True War Stories is currently up on Kickstarter for $35, where it surpassed its funding goal with just over a week left to go, and will be available for purchase by Veterans Day this year through most booksellers.