The first trailer for Thank You for Your Service, an upcoming Iraq War drama, has just dropped and it looks... 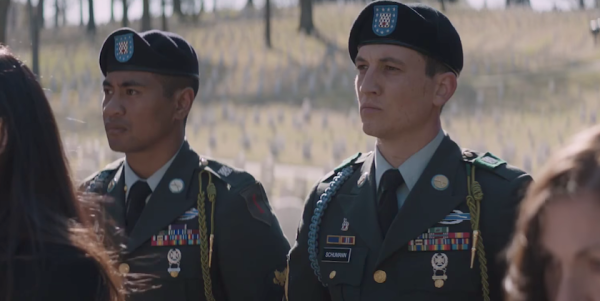 The first trailer for Thank You for Your Service, an upcoming Iraq War drama, has just dropped and it looks like the filmmakers are gunning for the Oscars with this one. Based on Pulitzer Prize-winning journalist David Finkel’s nonfiction book of the same name, the film focuses on Staff Sgt. Adam Schumann, a U.S. Army infantryman, played by Miles Teller (War Dogs), who has just returned home from a crazy year in Iraq — and, yes, you’ve guessed correctly: He has terrible post-traumatic stress disorder. Because why would Hollywood make a movie about an Iraq War veteran who doesn’t? That’d be boring.

The film was written and directed by Jason Hall, who wrote the script for American Sniper. It also stars Haley Bennett (The Girl on the Train), as Teller’s wife, and comedian Amy Schumer (Trainwreck) in an unspecified role (a machine-gunner, perhaps?). But there doesn’t appear to be anything funny about Thank You For Your Service. Finkel’s book was a sequel to his acclaimed 2009 best-seller The Good Soldiers, about an Army infantry battalion Finkel embedded with in Iraq for eight months during the 2007 troop surge. In Thank You For Your Service, Finkel followed some of those soldiers home.

In the trailer, Schumann explains in a thick Southern accent that he was a good soldier and his specialty in Iraq was spotting IEDs. Back home in Georgia, he’s got it all: an attractive wife, a kid, and a beautiful house with a white picket fence. His life is “perfect,” he says. But then he cooks a pancake for his daughter and makes the mistake of decorating it with a chocolate chip smiley face. “She doesn’t like chocolate,” Schumann’s wife informs him. Turns out, things aren’t so perfect, after all. Everything spirals out of control from there. Check it out: