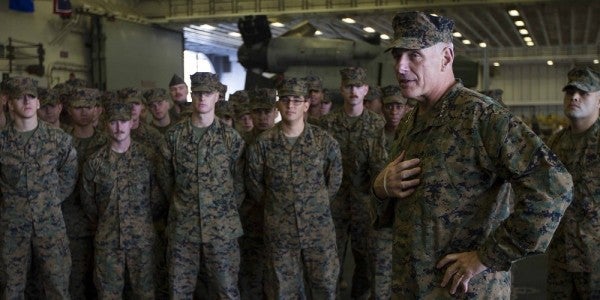 Marine Corps Gen. John Kelly, who has led U.S. Southern Command since November 2012 and whose military career spans more than 40 years, will retire this year. Kelly is viewed as a frank and bluntly spoken brawler, as well as a man who has witnessed the very worst of war, and his combat experience and status as a gold-star parent has endeared him to the Marines he leads.

“It is not in our power to end it, but simply to fight it,” Kelly said in 2013 about the likelihood of sustained combat overseas. “Until our murderous enemy, who hates us with a visceral disgust for everything we stand for, either gives up or we kill him.”

Kelly, an enlisted Marine during Vietnam, became the most senior officer to lose a child in combat since Sept. 11, 2001, when his son, Robert, 29, was killed by an enemy explosive in Afghanistan in 2010. As a one- and two-star general, Kelly spent three years leading troops, and in 2008, he was in Iraq’s Anbar province during what has become known as the Awakening Movement, which saw Sunni militias ally with the Shiite-led government to fight al Qaeda’s growing influence in Iraq.