Some are calling him a cop, others a soldier. But whatever he is, we can all agree that there is... 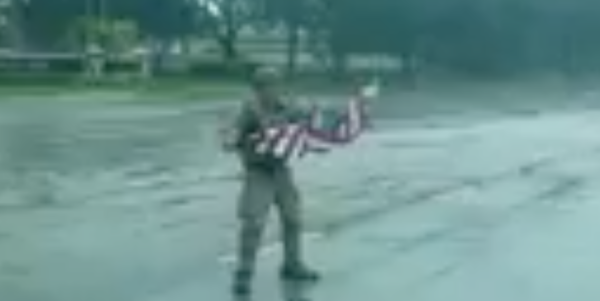 Some are calling him a cop, others a soldier. But whatever he is, we can all agree that there is one thing the mysterious man filmed rescuing Old Glory in the middle of Hurricane Irma is certainly not: a communist.

The video, filmed from within a vehicle of some sort, shows a man in body armor and what appears to be a helmet charging through a withering barrage of raindrops to retrieve an American flag, which is lying in a crumpled heap on a desolate stretch of road.

But it’s what happens next that will truly amaze you.

Even in the midst of a storm, we are reminded of the love for our country and community. #HurricaneIrma #September11 pic.twitter.com/n3G5mqMKbY

Once the victim is safely in his arms, the man does what any patriot would do. Instead of lighting the flag on fire, he uses his two hands to stretch out the fabric so the Stars and Stripes can ripple gloriously in the wind for all to see.

The Coral Springs Police Department first shared the harrowing footage on Twitter on Sept. 11, and the local ABC affiliate reported that the man in the video was a police officer with the department.

However, by the time the video appeared on the official Fox News Twitter account several hours later, the man had transformed into a member of the U.S. Army. (As an Army veteran, I prefer this version.)

“In Florida, this soldiers showed his respect for the American flag in the middle of Irma,” reads the text superimposed over the video as a piano rendition of The Star-Spangled Banner plays gently in the background.

The man in the video, whoever he is, now belongs to a proud tradition of people going above and beyond to rescue American flags in the midst of natural disasters.

For example, in June, as wildfires ripped across northern California, three firefighters saved an American flag from a home about to be swallowed by the flames. A photo of the rescue operation went viral.

Inspiring moment: A trio of firefighters rescued an American flag amid the flames of the Wall Fire in California. https://t.co/etqhIdJd53 pic.twitter.com/v71e4xRJo7

Similar images surfaced during Hurricane Harvey. “While some dishonor and desecrate her, APPD Ofc. Jack McCarty will stop at nothing to honor and save her,” read the caption of a photo of a Texas police officer saving an American flag in Houston, which was like more than 6,000 times.

The man in the Coral Springs video wasn’t the only Floridian who stopped at nothing to honor and save Old Glory during Irma on Sunday.

Another video posted to Twitter on Sept. 11, this time by the Martin County Sheriff’s Office, showed a deputy, Lt. Danny Cunningham, doing exactly what the Coral Springs officer had done: getting out of his vehicle to save a battered American flag as raindrops pelted his body and face.

“I couldn’t watch it get blown apart,” Cunningham later told The Daily Caller. Fortunately, thanks to men like Cunningham, neither he nor we had to see that happen.