Seven soldiers — four bobsledders and three lugers — are aiming for gold and glory in the 2018 Winter Olympics... 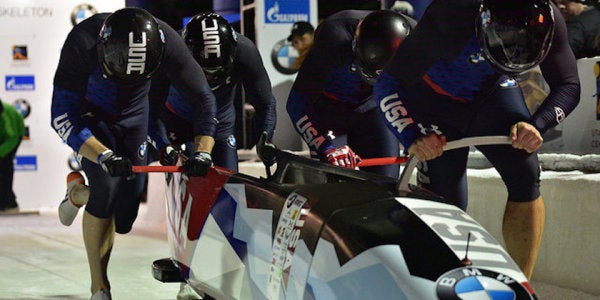 Seven soldiers — four bobsledders and three lugers — are aiming for gold and glory in the 2018 Winter Olympics in Pyeongchang, South Korea.

The Army athletes will join the hallowed ranks of venerated military veteran Olympians, including such noted Americans asLouis Zamperini,John Woodruff, and Leon Spinks.

Six of the seven athletes are associated with the World Class Athlete Program, a detachment that allows soldiers to train for and participate in the Olympics, Pan American Games, and World Championships.

Comcast NBCUniversal, in partnership with the Exchange and local cable, satellite and telecommunications providers, is offering service members and honorably discharged veterans streaming of the games “free of charge.”

Opening ceremonies are scheduled for 6 A.M. EST on Feb. 9. Luge events run from Feb. 10-15. Two-man bobsled races will take place Feb. 18-19, and four-man races occur from Feb. 24-25. In the meantime, here’s a bit of background on the seven soldier Olympians to watch in PyeongChang.

Maj. Christopher Fogt returns to the Olympics as a bobsled brakeman after earning a Bronze Medal in 2014. Fogt told the Associated Press that the military’s emphasis on teamwork and overcoming adversity gives the soldier bobsledders a unique perspective.

“In the Army, you have to be part of a team from your very first day of basic training. On top of that, we’ve been through worse situations,” Fogt told the Associated Press. “When you’re bobsledding and it’s minus-20 degrees on the hill and it’s snowin’ and blowin’, you remember you’ve been on the field without meals in this kind of weather, hanging out in a foxhole. So that mental toughness helps us a lot.”

Here’s an Olympic Channel documentary that follows Fogt around Fort Hood as he juggles being an officer, Olympian, husband, and father.

“There’s not really a whole lot of opportunity to train for something like bobsled, but it’s one of those things where you make it work. You’re doing sprints in the jungle and your partner forces are kind of looking at you like you’re crazy,” Weber told the Denver Post.

During a sprints workout in Afghanistan, Weber used a brush with mortar bits torn apart by a C-RAM to get fired up and train harder.

“I’m about two sprints into this workout, and one of these C-RAMs, which are big machine guns that shoot mortars out of the sky, goes off right next to me. It’s really loud, so it kind of gets my attention. I look up and maybe 75 meters above me, it shoots a mortar out of the sky. Bits and pieces of this thing start sprinkling down, nothing that hurts, but a couple pieces hit me on the arm. I’m like, ‘Oh, wait a minute, that thing was coming right for me, I need to go stand next to a wall.’ Then it really sinks in, ‘That thing was coming after me, it was going to land really close by,’” Weber told the Denver Post.

“That got my adrenaline going. My first thought was, ‘I bet I could run really fast right now, I’m already warmed up, I don’t want to waste this,’ so I kept running sprints,” Weber said.

Bobsled driver Sgt. Nick Cunningham compared the level of readiness expected in the Army to the preparation needed to compete on an Olympic team in an Army press release.

“The Army taught me realistic goal setting, how to set smaller goals for yourself and then work up to the biggest ones. The Army also teaches preparation and how to overcome adversity, and that plays a role in our sport, too — readiness and being ready to go,” Cunningham said.

“Success is 95 percent preparation and readiness, being in the moment, and 5 percent luck. In bobsled, your luck depends on many things: decisions made, the weather, and when a course has 20 turns ─ and you run it four times ─ that's 80 corners for each event,” he added.

If you’re wondering how bobsleds are driven, Cunningham recently tweeted a video of him careening down a track in Utah.

One of the questions I get asked the most is "How do you steer a #bobsled?" Well, instead of trying to explain it, I figured I would just show you. #UtahOlympicPark #4MAN #84MPH #15Curves @TeamUSA @Olympics pic.twitter.com/CsrhZBIUve

Sgt. Justin Olsen returns to the Olympics for a third time after winning a gold medal in 2010. On Monday, Olsen underwent a successful laparoscopic appendectomy in Gangneung after being admitted to the hospital for acute appendicitis. He is still expected to compete as a push athlete.

In an Army press release, Olsen recalled the thrill of realizing the team had struck gold in 2010.

“I remember being at the top of the track in Whistler for the fourth heat of the Olympic Games and looking around and only seeing my three teammates,” Olsen said. “We knew that if we put in another good run, the gold was ours. There wasn't any doubt in their eyes or mine. Coming across the finish line and seeing that we were in first place still, and our friends and families were going absolutely crazy, was amazing. I will never forget getting out of the sled and putting my arms around my three teammates and saying: 'We did it, boys! We won it all!'”

Here is a Whistle Sports video of Olsen and other Olympians telling terrible jokes.

After not making the Olympic team in 2014, luger Sgt. Emily Sweeney didn’t train much for six months.

“I went from being an Olympic hopeful, training at 100 percent,” Sweeney said in an Army press release, “to just stopping everything.”

In the spring of 2014, the Warrior Leader Course (now the Basic Leader Course) provided Sweeney with a useful wakeup call.

“(WLC) kind of pulled me out,” said Sweeney. “It gave me a schedule that I had to adhere to again. I kind of got back into the military mode and then after that I got back into my training.”

Sweeney plans to bring a medal home for the team.

Morris hugged his friends and family and then found his wife, Megan. The couple embraced for two minutes, according to an Army press release.

“It's the biggest amount of redemption that you really could ever feel when you train for so long,” Morris said. “This is 16 years for me now, it means the world to have my family here — to have my home crowd cheering me on and wishing me the best.”

“Matt is a mentor to me. He is such a huge help. He’s been sliding for so long, and he’s such a good friend. He explains things so well. If I need help, Matt’s there and he always has my back,” Krewson said to Newsday.

“Our generation is really trying to create a culture of openness with the other athletes,” Mortensen told Newsday. “When I see a younger doubles team coming up, I do try to give them advice and steer them in the right direction.”

Last month, Mortensen posted a first person video of him and his teammate, Jayson Terdiman, whipping around a Doubles Luge track.