Ah, the year 2000: When we all poked our heads out of our underground bunkers and found the Y2K bug... 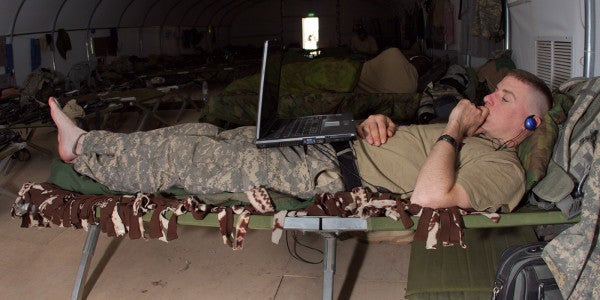 Ah, the year 2000: When we all poked our heads out of our underground bunkers and found the Y2K bug hadn't crashed the World Bank or caused all of our AOL free internet CDs to spontaneously combust. It was a pre-war time, too — relatively speaking — and it was the year I joined the Army as a dumb 17-year-old.

Now, I’m a dumb 34-year-old entering my 18th year in the Army, which means 2000 babies are old enough to fight in the war I first fought back in the early aughts. I don’t know any of those babies, but the music of their birth year is still with me, bringing memories of those glory days of high school, when we were invincible and ready to take the world by storm. These albums represent a time of innocence and optimism. When we were happy and singing “THAT THONG, THA-THONG THONG THONG” at the top of our lungs. And now, like me, they’re deployable.

NSync’s catchy famebomb seems like the kind of nice kid who waits to graduate high school with a bunch of cords and patches before breezing into an Air Force contract doing… whatever. In those days, I would’ve told you there was nothing about NSync that was worth your time, just a bunch of pretty boys with frosted tips that all our girlfriends were in love with. The five-headed Jody of my teen years. Now, as an adult, I can hear “Bye Bye Bye” and appreciate what went into it. Purists will complain about it sounding overproduced, but so is the Global War on Terror. Plus, try hating Justin Timberlake and Joey Fatone. You can’t do it. They’re the guys on deployment nobody ever really knows but everybody always really likes.

It’s the album that established Eminem as a real force, you know, before he quit rapping about nutty fans, nutty media, and nutty ex-wives. Even if the hooks hadn’t been insane, they got lifts from Dr. Dre, Xzibit, and two Doggs (Snoop and Nate). The Marshall Mathers LP was one of those albums that turned rap music upside down and gave it a quick shake over the balcony. Eighteen years later, this album is ready to leave Eminem’s nest and join the fight against al Qaeda. Don’t worry, though — D12 probably puts on a great going-away party.

Country Grammar holds a place in my heart — Nelly is one of the few defining Midwest hip-hop artists, from my hometown of St. Louis. But what made this album a nationwide thing was Nelly’s ability to mix melodic vocals with irresistible beats and just make the album fun, like cowboy boots dancing along with Air Force Ones, or sailors and Marines living in harmony. There’s hardly a single track on Country Grammar that you won’t find yourself moving along to in no time. A great icebreaker and tension-reliever while you’re in your seventh hour of guard-tower duty with some quiet dude from another state you never visited.

Along with the Y2K virus, the year 2000 unleashed Coldplay on the world with their debut album Parachutes. This British band broke away from the ’90s whine-fest that was Oasis and brought emotional electronic-jam tunes into the mainstream — like Radiohead, but safe for adult contemporary radio. Coldplay was that quiet reprieve you needed to relax and rehydrate before you jumped back into the fray. Heal your bones. Feel shit. Listen to it while you unsuccessfully try to woo that married troop you’ve been eyeing from afar in the DFAC. Parachutes gives you the mellow confidence you need. This album is that guy who joined, did fine, and then just disappeared one day and no one knows what happened, but he’s not on the roster.

Hot track: “I Won’t Back Down”

Thank heavens for Johnny Cash, USAF (Ret.) — and for Rick Rubin, the maverick producer who helped Cash find a new audience in his seventh decade with the American album series. Just Johnny, an acoustic guitar, maybe some piano, and a buttload of fearless covers — from industrial (Hurt by Nine Inch Nails, a haunting rendition that even put NIN frontman Trent Reznor to the verge of tears) to the toe-tapping Tom Petty classic “I Won’t Back Down.” American III is the quiet E-4 you think you have pegged, till the crap hits the fan and he whips out some heroism. It’s also a country album you can put on in the MWR and no one yells at you to turn off that hick shit.

Outkast is one of those groups that affects you on a visceral level. A blending of experimental beats and southern style rap, Stankonia ripped into your soul, did a funny interlude in it, and then shook it around with some crazy beats and lines. Everybody has “Ms. Jackson” and “So Fresh, So Clean” on a party playlist, but the pulse-pounding (and oddly prophetic) “B.O.B.” (Bombs over Baghdad) goes HAM on your senses in the best way possible. Stankonia’s the kind of album that probably aces its PFT, breezes through Fort Sill, and dials up effective fire before organizing the FOB party that everybody gets NJP-ed for.

How did we measure the sappy greatness of pop before the Now That’s What I Call Music series? These days, when I happen across current iteration (NTWICM 64 dropped last November), I can’t even tell who the bands are. Imagine Dragons? I want to listen to music, not get into LOTR, nerd! My generation of pop music was the best and everything before and since is garbage, as these two compilations of Britney, Mandy, Kandi, Macy, and Lenny clearly demonstrate. Kick it up with “Steal My Kisses” by Ben Harper, hold back tears with “Wonderful” by Everclear. Feel guilty? You should. These albums are the law school bros who buy you Red Stripes on that weekend pass to Myrtle Beach and ask if you’ve ever killed anyone.