Rules to live by: Never get involved in a land war in Asia; don’t tweet angry; don’t sell stolen military... 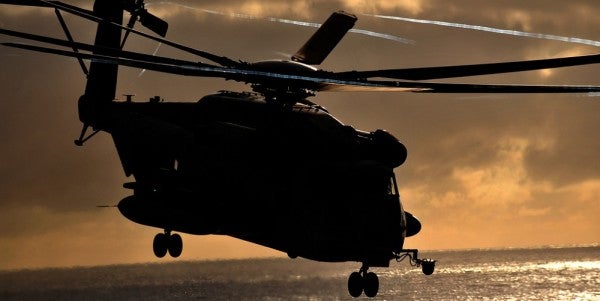 Rules to live by: Never get involved in a land war in Asia; don’t tweet angry; don’t sell stolen military swag on Ebay; and never, ever shine a laser at the cockpit of a helicopter. That last one has real consequences — a lesson learned by a group of British hoodlums in 2014 — but apparently, some sailors in Iran’s Navy never got the memo.

Sailors aboard an Iranian Navy patrol boat decided it would be a good idea to shine a laser at the cockpit of a Marine Corps CH-53E Super Stallion helicopter that was on a flight at night over the Strait of Hormuz on June 13, according to the Associated Press. Given that pilots flying in the dark use night vision goggles, hitting a helo with a laser can screw with the optics, which is dangerous no matter how much of a hotshot pilot you think you are.

It didn’t stop there. The Iranian vessel came within 800 yards of an amphibious assault ship, the USS Bataan, sweeping with a spot light from bow to stern, before turning it’s light on the USS Cole, a guided missile destroyer, according to AP.

This is hardly the first time an Iranian naval vessel has gotten a little too close for comfort, and the Iranian military is far from the only adversary nation to pull off impish stunts for kicks near U.S. ships and warplanes. Recently, Chinese and Russian warplanes have been buzzing around American vessels with such regularity that it makes you wonder if they’re as excited for the Top Gun sequel as Tom Cruise is.

A picture I took of a Russian "flanker" fighter on the tail of a @usairforce B-52 bomber over the Baltic Sea today—I was onboard a KC-135 pic.twitter.com/pGbawrCM30

But given the chances for a miscalculation, in the air or at sea, it seems downright childish to go around buzzing warships, trailing aircraft, and yes, dicking around by pointing lasers at helicopters in international waters, even if things don’t escalate to warning shots like they did for a few days in the Persian Gulf in August 2016.

Then again, ship life can be kind of rough if you don’t have anything to do, which makes laser-pointer hijinks an understandable pastime for Iran’s sailors. I guess it’s why some service members have even take to hiding in the engine room of a missile cruiser for a week straight.