In Da Nang, Vietnam, American and Vietnamese war veterans sat together on the 4th of July, eating burgers and fries... 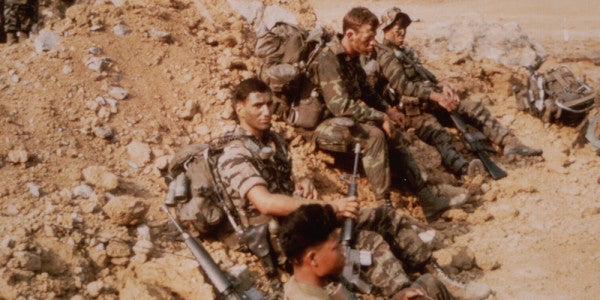 In Da Nang, Vietnam, American and Vietnamese war veterans sat together on the 4th of July, eating burgers and fries while iconic music of the war — Creedence Clearwater Revival — played in the background. Once on opposite sides the war, the two groups have come together to bury the hatchet, and leave the past behind them.

“I can feel the friendship,” said Nguyen Tien, a former Vietnamese fighter who lost his legs to American artillery during the war. “We have closed the door on the past.”

The event was organized by Larry Vetter a retired Marine who moved to Vietnam three years ago. Vetter now lives among some of the very people he was once sent to fight, and to kill. The gathering is a marker of how far the geopolitical relationship between the U.S. and the Vietnamese government have come. For the men who fought for the two sides, it’s a chance at closure.

“I’ve learned how to forgive from the Vietnamese,” said Chuck Palazzo, a retired Marine who moved to Vietnam eight years ago and is leading an effort to build a rest home for 5,000 victims of Agent Orange. “I’ve learned from them to keep looking forward.”