Photos reveal extensive damage to the US Embassy in Baghdad

New photos captured by the Associated Press reveal the extent of the damage caused to the U.S. Embassy in Baghdad during the New Year's Eve assault by Iran-backed militia fighters 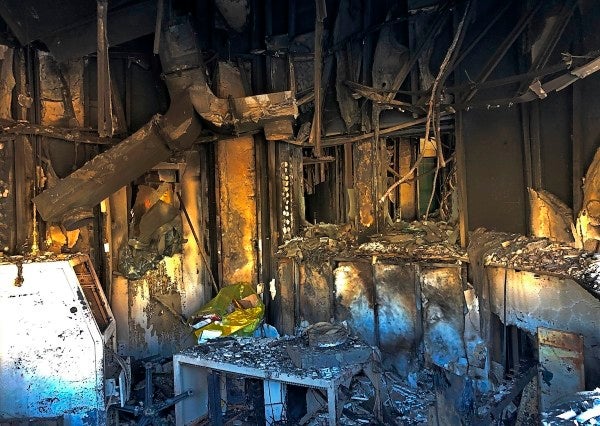 New photos captured by the Associated Press reveal the extent of the damage caused to the U.S. Embassy in Baghdad during the New Year's Eve assault by Iran-backed militia fighters.

The photos, published by the AP on January 2nd, reveal burned-out rooms, shattered windows, and mounds of debris scattered across the interior of a checkpoint kiosk and reception room just inside the perimeter of the heavily-fortified Green Zone.

Pro-Iranian militiamen and their supporters are seen through a broken window of a burned checkpoint in front of the U.S. embassy in Baghdad, Iraq, Wednesday, Jan. 1, 2020
(Associated Press/Khalid Mohammed)

Reuters reports that pro-Iran militiamen and Iraqi protesters were unable to penetrate the main compound thanks to the quick response of Iraqi and U.S. security forces, who fired tear gas into the assembled crowd.

Smoke rises from the reception room of the U.S. embassy that was burned by Pro-Iranian militiamen and their supporters, in Baghdad, Iraq, Wednesday, Jan. 1, 2020.(Associated Press/Khalid Mohammed)

In response to the assault, the Pentagon has tasked 100 Marines with a Special Purpose Marine Air-Ground Task Force to reinforce the embassy.

As of Thursday, 700 paratroopers from the 1st Brigade Combat Team, 82nd Airborne Division have also been deployed to Kuwait in case they are needed in Iraq.

“We are confident that the integrity of that embassy is strong and it is highly unlikely to be physically overrun by anyone,” Army Gen. Mark Miley, chairman of the Joint Chiefs of Staff, told reporters on Thursday. “There is sufficient combat power there for air and ground that anyone who attempts to overrun that will run into a buzz saw.”