Air Force Gen. Terrence O’Shaughnessy is sick and tired of all these damn hurricanes. In a Pentagon news conference about... 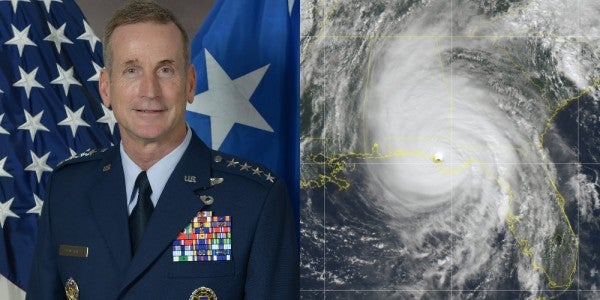 Air Force Gen. Terrence O’Shaughnessy is sick and tired of all these damn hurricanes.

In a Pentagon news conference about the U.S. military's response to the aftermath of Hurricane Michael in the Florida Panhandle, the head of U.S. Northern Command reassured the American public that, don't worry, we've got this pesky system on the run.

“We are surrounding the storm,” O’Shaughnessy told reporters Thursday. “The way the storm developed was much different than we have seen at the past.”

If that line sounds familiar, there's a reason for that: O’Shaughnessy dropped the same line when discussing Hurricane Florence in September, stating that military personnel had “quite literally surrounded” the East Coast states in the path of the hurricane

The resolve of military leaders during domestic emergency response efforts is always appreciated, but it's a bit weird to describe a storm system as “surrounded.”

It's not unlike Camp Lejeune commander Brig. Gen. Julian Alford's message to Marines ahead of Florence that they were bracing for an “upcoming fight” against the storm system, a message he had to defend as weirdly macho.

“Camp Lejeune has endured countless destructive weather events over its 77-year history, and we will withstand the tough conditions ahead,” Alford said at the time.

That's not necessarily the case for Michael, which cut a swath of destruction across the southeastern United States that left 13 dead and “widespread catastrophic” damage at Tyndall Air Force Base in Florida. An Air Force spokeswoman told Task & Purpose that she was currently unaware of any injuries or fatalities as a result of the hurricane.

To be clear: You cannot encircle a storm system. Florence was between 200 and 250 miles wide; Michael was 350. Even with the full capabilities of the Army and Marine Corps, you cannot outmaneuver Mother Nature. This is not a Chinese military base; it isn't even the Battle of Little Bighorn.

And please, for the love of God, do not fire your gun directly at the hurricane.

If O’Shaughnessy wants to head into the Atlantic to fight Hurricane Michael, well, that's his prerogative. In the meantime, he should consider what he sounds like.