Tyndall Air Force Base in Florida “took a direct hit from Hurricane Michael” and base leaders do not know when... 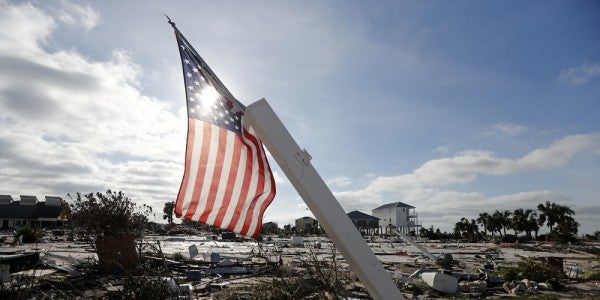 Tyndall Air Force Base in Florida “took a direct hit from Hurricane Michael” and base leaders do not know when it will reopen, the base posted on its Facebook page.on Thursday.

Recovery teams have found “widespread catastrophic damage” to the base and “widespread roof damage to nearly every home” in areas of base housing, according to the base’s most recent Facebook post.

Video of the base shows extensive wreckage. The high winds tossed around aircraft in static displays as if they were toys. Air Force spokeswoman Ann Stefanek said she was unaware of any injuries or fatalities as a result of the hurricane, which was a Category 4 storm when it slammed into Tyndall on Wednesday.

There was no word as of Thursday about whether Tyndall’s runway had been damaged by the hurricane, Stefanek told Task & Purpose.

“The base is closed and I don’t expect it to open in the very near future,” she said.

Gen. Mike Holmes, head of Air Combat Command, issued a video message on Thursday telling Tyndall airmen and their families who evacuated ahead of the storm that it is not safe to return to the base.

“I’m glad that you evacuated, I’m glad you followed the guidance, and I hope you that you’re in a safe and comfortable place,” Holmes said. “If you are, please stay there. In the hours and days to come, we’ll know more about the conditions at Tyndall and we’ll know more about when you can come back.”