A Florida lawmaker has revealed that 17 F-22 Raptors were at Tyndall Air Force Base when Hurricane Michael leveled the... 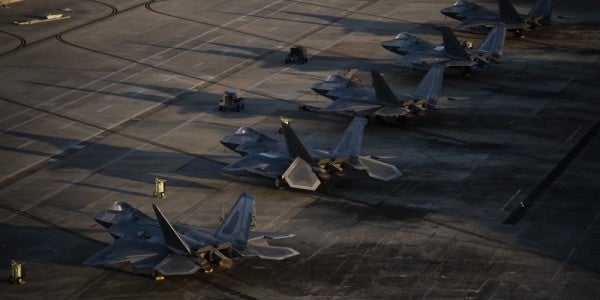 A Florida lawmaker has revealed that 17 F-22 Raptors were at Tyndall Air Force Base when Hurricane Michael leveled the installation on Oct. 10 — yet both the Air Force and Pentagon still refuse to say how many Raptors were damaged by the storm.

Thirty-one percent of the 55 Raptors based at Tyndall remained at the installation during the storm because they were unable to fly, U.S. Sen. Marco Rubio, a Republican, wrote in an Oct. 22 letter to Air Force Secretary Heather Wilson. Rubio urged Wilson to repair the F-22s as soon as possible to meet Defense Secretary Mattis’ goal of having 80 percent of all fighter aircraft flight-worthy by fiscal 2019.

“I ask you waste no time or effort in providing a supplemental funding request to Congress to repair and restore these aircraft to mission capable status as soon as possible,” Rubio wrote in his letter, which was first reported by Military.com.

The senator’s letter marks the first time a government official has provided a number for how many Raptors rode out Hurricane Michael at Tyndall Air Force Base. Air Force officials have steadfastly refused to answer reporters’ questions on this issue for more than two weeks.

The service’s position has not changed despite Rubio publicizing the number of damaged Raptors, Air Force spokeswoman Ann Stefanek said on Thursday.

“All of the F-22s from Tyndall will fly again,” Stefanek told Task & Purpose. “As an update, we began moving some F-22s from Tyndall to Langley this week. Additionally, aircraft maintainers are on-station repairing other F-22s that received minor damage and assessing a few others that may require additional engineering support and analysis before they return to flight status.”

The silence about the exact number of the F-22s at Tyndall during the storm is part of the “new normal” under the National Defense Strategy, said Brig. Gen. Ed Thomas, head of Air Force Public Affairs.

“We're more calculated about releasing details that could advantage or embolden potential adversaries,” Thomas told Task & Purpose. “Discussions on the location or operational status of specific weapon systems, how we perform certain missions, or other areas that could be vulnerabilities are just things that we will avoid. We are communicating the details of any given issue to Congress on a regular basis and will continue to be as transparent as we can while still protecting national security.”

During his time at the Pentagon, Mattis has clamped down on how much information the military services can make public, including how many planes are flyable. The Naval Safety Center recently removed statistics on crashes and other mishaps from the portion of its website that is open to the general public.

“The secretary has said, many times, how it’s very important that we not telegraph to the enemy,” Chief Pentagon Spokeswoman Dana White said during a Jan. 11 news conference.

When asked if Mattis had ordered the Air Force to not make public how many F-22s were damaged by Hurricane Michael, a Pentagon spokesman said Mattis’ main concern was taking care of the Tyndall airmen and their families, who were displaced by the storm.

“As a standard, the department does not speak specifically about operational readiness of military platforms, or any other indicator that would be advantageous to enemies or adversaries around the globe,” Air Force Lt. Col. Michael Andrews told Task & Purpose.