Here’s Exactly What A Roadside Bomb Does To Your Head

Tom note: The following paragraphs are the scariest thing I have read in a long time. They are excerpted from... 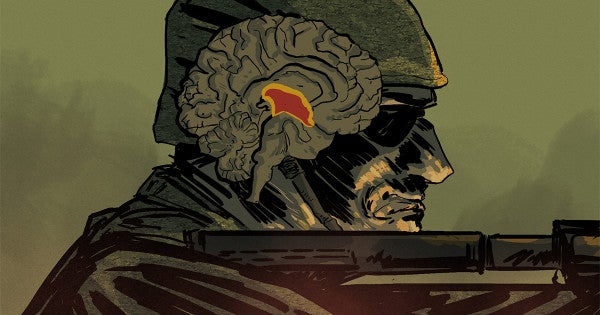 Tom note: The following paragraphs are the scariest thing I have read in a long time. They are excerpted from a new book The Many Faces of War.

Here is what we have learned from the military and what has become routine for a head injury whether in Iraq, Afghanistan or the emergency room in your city after admission for a presumptive head injury or stroke.

As soon as you enter the emergency room (ER) as a “Head Injury,” your blood pressure and breathing will be stabilized. ER doctors know the procedures and will, if there are signs of increased intracranial pressures, put you into a drug-induced coma to slow any ongoing damage to injured brain cells and protect any of the remaining healthy tissues from undergoing any secondary damage.

A calcium channel blocker will be administered to help stabilize the outer membranes of the injured nerve cells to maintain normal intracellular metabolism. If your blood pressure becomes too high, ER personnel will lower the pressures to protect against any re-bleeding or the expansion of any blood clots that have already formed within the brain following the initial injury. If the pressures are too low, which can further decrease the blood flow to what remains of the undamaged brain tissues – itself leading to more neurological damage, medications will be given to raise the pressures to maintain adequate blood flow to the brain and central nervous system despite the injury.

Those parts of the brain not damaged still have to receive their usual amounts of oxygen and nutrients. But even with all this care after a traumatic brain injury, recovery is always one of those medically “iffy” things.

If the brain continues to swell, damaging as yet undamaged parts of the brain, the neurosurgeons will begin IV fluids of 8 to 12% saline to control swelling. If that doesn’t work, they will add an IV diuretic to drain the body of fluids in an effort to keep down the increasing intracranial pressures that may continue to compress arteries, cutting off oxygen to the still healthy brain cells. If the hypertonic fluids and diuretics fail to work, they will take you to the operating room and neurosurgeons will remove the top of the skull to allow the brain to swell without compressing and damaging any of the still undamaged underlying tissues.

Since the brain is in a closed space, the overriding idea behind removing the top of the skull is to relieve any increasing intra-cranial pressures that would surely further damage the tissues of the physically compressed brain. Such a development would be even more damaging to tissues as the decreased delivery of oxygen would impair the still undamaged brain tissues. When the swelling has finally decreased and the brain is back to normal size, the neurosurgeons will simply put back that part of the skull removed and wait for the patient to recover.

All of this works and has worked hundreds of times in military surgical hospitals and in emergency rooms and major trauma centers around the country. It certainly works if the patient has been shot in the head. It worked for Congresswoman Gabrielle Giffords when she was shot while campaigning in Arizona, and it has worked for those soldiers shot in the head or suffering neurological damage from IEDs in Iraq and Afghanistan.

But what we have learned from the battlefields of our newest wars is that the brain damage from an IED appears to be a different kind of traumatic brain injury.

Related: This Is Your Brain On War »

Treatments at an earlier time regarded as usual for head injuries do not work. There is clearly something different and so unexpected going on down at the cellular or sub-cellular level of the brain following exposure to a pressure wave that is not the same as hitting your head on the pavement, falling in a bathroom, or being shot in the head. There is simply something fundamentally different about being blown up.

Since 2002, American military medicine has had to respond to that medical fact and in doing so has taught us something important about the whole issue of brain trauma. Clearly, brain injuries from explosions are different from all the usual kinds of neurological injuries, the penetrating head wounds and trauma from falls and simply being hit on the head by a hard object. Army neurosurgeons at combat surgical hospitals have told how they would rather take care of patients with penetrating head wounds from bullets because it was simpler: there was “only” the damage along the bullet’s track, whereas with a blast injury almost every part of the brain is injured. Unfortunately, that is now an understanding shared by everyone involved with caring for a patient following a closed head injury by a passing blast wave from an exploding gasoline storage depot or detonated roadside bomb.

But all this has been seen before, though never applied to adult neurology and neurosurgery. There is not a pediatric neurologist who would not say that the worse and most devastating brain injuries they have seen in their pediatric practice are those infants diagnosed with what is popularly called the “Shaken Baby Syndrome.”When a child has been vigorously shaken by an adult – its head snapping back and forth – the brain repeatedly hits the inside of its hard skull. Even if they recover, such children are severely brain damaged both neurologically and eventually mentally. A shaken brain is always a problem, whether it is an infant or an adult.

Ronald Glasser, MD, is a veteran of the Army and author of Broken Bodies, Shattered Minds: A Medical Odyssey from Vietnam to Afghanistan. This is excerpted, with permission, from The Many Faces of War, edited by Lawrence Tritle and Jason Warren and published by Tsehai. ©2018. All rights reserved.