From 1st Combat Strike To 1st Crash: It’s Been A Chaotic Month For The F-35

The last few weeks have been a roller coaster for the F-35, from its first combat airstrike, to its first... 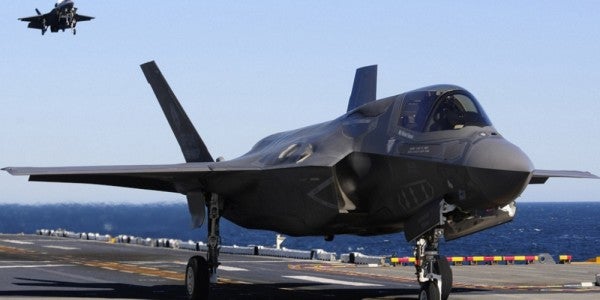 The last few weeks have been a roller coaster for the F-35, from its first combat airstrike, to its first crash, to the Pentagon ordering the entire F-35 fleet grounded as it inspects a possibly-dangerous aircraft part.

The aircraft, part of a decades-long effort to create a next generation warplane that could do everything from providing close air support, to air superiority, surveillance, and electronic warfare, has been a punching bag for critics due to ballooning costs, delays, and safety concerns.

On Sept. 28, the oft-maligned F-35 program appeared to be vindicated when the Marine Corps’ variant, an F-35B, conducted an airstrike in support of operations in Afghanistan, for the first time.

The aircraft that performed the attack bore the name of ‘Lt. Col. C.K. ‘Otis’ Raible’ a commander of Marine Attack Squadron 211, who was fatally wounded in combat in 2008. It was Raible’s old squadron that conducted the attack against a “fixed Taliban target,” Task & Purpose previously reported.

But less than 24 hours later a different Marine F-35B out of Marine Corps Air Station Beaufort in South Carolina crashed just five miles away from the base — the first crash in the aircraft’s 17-year history.

In the wake of the crash, the Pentagon ordered Wednesday that all variants — from the Marine F-35B, to the Air Force “A” version and Navy “C” variant — cease flight operations as the military conducts a fleet-wide inspection of a fuel tube within the engine.

It was a recent engineering investigation into the September crash that prompted the examination of the fuel tubes, Marine Capt. Christopher Harrison, a Pentagon spokesman, told Task & Purpose.

“This is being done as a precaution in order for all aircraft to go through a mandatory inspection that the Joint Program Office has asked us to complete,” Harrison added.

The inspection of the fuel tubes is already underway, and expected to be completed within 24 to 48 hours, Joe DellaVedova, a spokesman with the Pentagon’s Joint Program Office, told Task & Purpose.

The F-35 program faces even more challenges than these most recent high-profile incidents. Defense Secretary Jim Mattis ordered the Air Force and Navy to get mission capable rates for its aircraft, including the F-35, to above 80% by next year, Defense News reported.

That seems a tall order, since the Air Force's most recent figures put the F-35A at 54.67% mission capable, a nearly 10% decrease from the previous year (The Navy's figures are released less regularly, according to Defense News).