Move Over, Mattis: The Air Force Has A Real-Life Warrior Monk

Secretary Jim Mattis has earned himself some colorful nicknames over the years. He's sometimes referred to as “Mad Dog” (even... 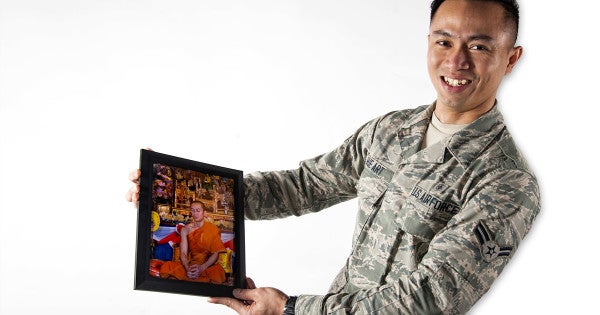 Secretary Jim Mattis has earned himself some colorful nicknames over the years. He's sometimes referred to as “Mad Dog” (even though he totally hates that one) or “Chaos,” and since he's known to be a deep military thinker who's never been married, many know him as “Warrior Monk.”

But that last one should probably be reclaimed by Airman 1st Class Kornkawee Rue Art, because he's an actual, real-life monk — who is currently serving in the Air Force.

The service's public affairs team recently did a profile on the airman, which explained that Rue Art lived as a monk in Thailand for 18 years — specifically, a Theravada Buddhist monk — before deciding to enlist.

“When I first became a monk, I didn’t think it would open any professional doors,” Rue Art said, according to the profile. “But the first time I heard I could join the military, I saw the opportunities. I would be able to meet more people, see the world and be a part of the world’s greatest military. Even when I was a kid, I saw ads for the Air Force in Thailand.”

He added: “And then I saw my chance to join. I wanted to feel that experience of being a part something larger than myself, to be with the best Air Force.”

It's pretty hard to fathom how you can go from Buddhist robes and meditation to Air Force blues (and, perhaps, someday burning feces at a remote outpost), but hey, chalk this one up as just another weird route for someone to make their way into the U.S. military.

You can check out the full story here.