Air Force Cross Recipient: It’s ‘Remarkable’ A Fellow Airman Is Up For The Medal Of Honor

Editor’s Note: This article by Oriana Pawlyk originally appeared on Military.com, the premier source of information for the military and veteran community. Air... 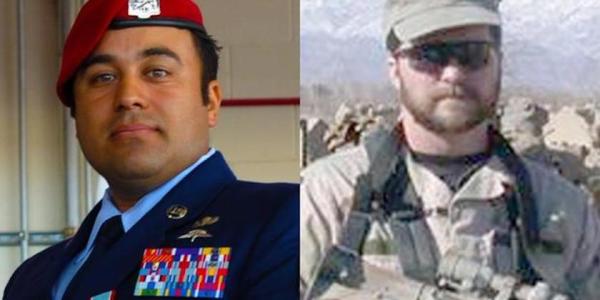 “I'm more thankful to be alive actually than anything else,” he told reporters during a briefing at the Pentagon on Wednesday. Gutierrez was speaking at the Defense Department's “lethality series,” which this week showcased the evolution of battlefield airmen.

Over the years, Gutierrez, a combat controller qualified as a special operations operator, combat diver, and parachute jumper, among other specialties, has gotten questions about his 2011 Air Force Cross award, which some experts argue should be a Medal of Honor.

During the four-hour firefight, Gutierrez was shot, suffering a “gunshot wound to the upper shoulder and triceps muscle, left chest and lateral muscle that resulted in two broken ribs, a broken scapula, softball-sized hole in his back, and collapsed lung,” according to an Air Force release.

But because he needed his radio, Gutierrez refused to take off his body armor to be treated by medics, instead allowing the medic only to relieve the chest cavity of blood once in a while. He would take in enough air to call in danger-close strikes from F-16 Fighting Falcons and A-10 Thunderbolt II close-air support aircraft.

Only 10 Air Force Crosses and 44 Silver Stars have been awarded to airmen in the Global War on Terrorism.

“We are very fortunate to even have someone who's already up for the Medal of Honor, John Chapman — huge deal for us,” Gutierrez said, referring to Air Force Tech. Sgt. John Chapman, the combat controller attached to SEAL Team 6 during Operation Anaconda.

Chapman died during the mission in Afghanistan in 2002. It has been reported that Chapman, who was believed to be dead, lived for more than an hour after the SEAL team left.

The Air Force has not publicly commented on speculation that Chapman — who received the Air Force Cross for his actions — will have his award elevated. The Office of the Secretary of Defense reportedly has recommended his award be upgraded to the Medal of Honor, but there has been no word from the White House.

Chapman would be the first airman to receive the award since the Vietnam War.

“It's remarkable,” Gutierrez said, adding that he was very fortunate to have fought alongside a service member who did receive a Medal of Honor for his actions, Army Staff Sgt. Robert Miller.

“I was there for [Miller] for operational detachment 3312 in Afghanistan, so when people ask that question , for me, when you witness it and you see it, it is very difficult to measure yourself against someone's actions that are so brave that they would sacrifice themselves for everyone to get the mission done,” he said.

Miller was leading a team of Afghan and coalition security forces in Kunar Province during a night raid on Jan. 25, 2008, when the team was ambushed by enemy fighters. During the firefight, Miller stayed at the front of the parol returning fire, signaling to his team to break off to save his teammates. He died during the mission.

“How do you measure up to actions so great?” Gutierrez said. “I've seen it in real life, and you're in such awe and thankful for individuals like that.”

Gutierrez told reporters Wednesday that his experience has shaped his latest role as the superintendent of standards and evaluation at Joint Base San Antonio-Lackland overseeing training for more than 1,100 students, instructors and support staff.

“Are we training them effectively? Am I giving them everything they need to prepare them to go to war? Have I made them strong enough, fast enough, and resilient enough to sustain a continuous warfighting effort?” he pondered.

“All my guys that I go to work with, every single operator that I work with, they all do the same thing,” Gutierrez continued. “To me, honestly, it's not that big of a deal because we're just doing our job. We are literally going to work, and there's more prestige and more honor and more value to go to war with individuals that I got to go to war with and serve my country.

“Awards are awards. What I value more is serving my country,” he said.