It’s OK for troops and veterans to not be OK

'I do think that there are a lot of people that are trying to white-knuckle it right now.' 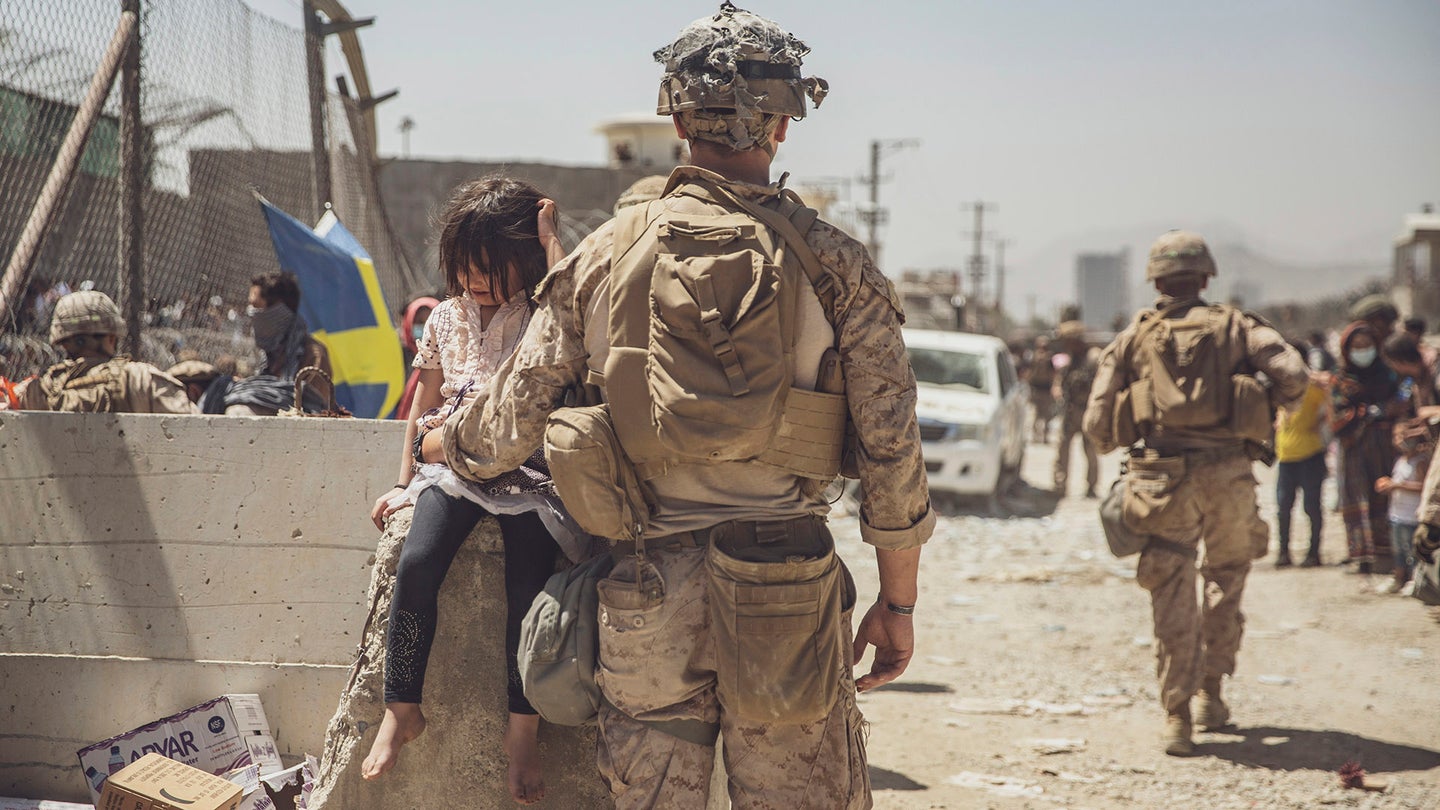 At the risk of stating the obvious: Things are awful.

The Taliban’s victory in Afghanistan is a true shot to the gut for troops and veterans who have fought there over the past 20 years. The apocalyptic evacuation was especially terrible for the troops in Kabul who spent days with crowds of Afghans trying desperately to get into Hamid Karzai International Airport. In at least one case, an Afghan man handed his baby to a Marine, who lifted the infant over the razor wire to safety.

Add to that the ongoing surge of the Delta variant of the novel coronavirus (COVID-19). Hospitals around the country are swamped with COVID-19 patients, leading to an acute shortage of intensive care unit beds. At least one veteran died of a preventable disease because his gallstones could not be treated in time.

To pile on, Hurricane Ida has drowned the Gulf Coast and Mid-Atlantic while wildfires continue to roll through the West like the Romans through Carthage. Climate change has perhaps guaranteed that National Guardsmen will be responding to once-in-a-lifetime natural disasters every week.

And the New York Mets find new and innovative ways to suck, but as a Phillies fan I can cackle with grim satisfaction.

To all service members and veterans who are having a hard time right now: Please don’t try to suck it up rather than reaching out for help. There’s no reason why you should have to tough out pain. Even the Spartans understood the concept of trauma and sought ways to heal warriors afflicted by it.

This has been a distressing time not just for Afghanistan veterans, but for others who have served in the military during the Global War on Terrorism and other conflicts, said former Army Capt. Meaghan Mobbs, who recently completed her doctorate in clinical psychology at Columbia University.

There has been a marked increase in calls to the Veterans Crisis Line, more veterans are seeking help at Department of Veterans Affairs clinics, and nonprofit groups that help veterans are seeing a surge in demand for care, Mobbs said.

“So, I don’t think you have to be there to find it extraordinarily distressing, and I do think that there are a lot of people that are trying to white-knuckle it right now,” Mobbs said.

The fact that the U.S. government was not able to evacuate all of the Americans from Afghanistan was a severe blow for troops and veterans, who have been instilled with the belief that the military will never leave anyone behind, she said.

The White House and Pentagon’s overly optimistic statements about the situation on the ground in Afghanistan prior to the fall of Kabul also made it difficult for troops and their families to know what to believe,  Mobbs said.

Mobbs said she has spoken with the spouses of troops who deployed to Afghanistan, who were not emotionally prepared by military leaders for the potential dangers that the evacuation mission could involve.

“They didn’t think there was going to be a threat on the ground,” Mobbs said. “That wasn’t conveyed to them. Obviously, the situation on the ground could change, but as they were getting activated and coming home to grab their gear and saying goodbye to their families, there wasn’t the feeling that they’ve felt in the past when they’ve been activated: this is a potentially dangerous situation.”

“Maybe the command didn’t know,” she continued. “That’s always a possibility, and so there wasn’t the ability to prepare those families. But I think a lot of families were caught very blindsided by the realization that this was as tenuous a situation as it actually was.”

The American Psychiatric Association recently announced that it is critical for service members to have access to mental health resources in light of the fall of Afghanistan, which may trigger a wide range of emotions including anger and concerns for those who could not be evacuated in time.

“We also recommend that anyone impacted by these recent events connect with friends and support systems and seek professional help if needed, because talking about a traumatic experience can be very beneficial to mental health,” the association announced in an Aug. 25 statement. “When complex feelings are left unaddressed, they can manifest into stress, anxiety and at times more serious mental disorders.”

Some symptoms of depression that service members and veterans should look out for include fatigue, having trouble sleeping or sleeping way too much, feeling worthless or guilty, having difficulty concentrating or making decisions, and an increase in hand-wringing, pacing, and other “purposeless physical activity,” according to the association.

The Defense Department offers troops, veterans, and family members a range of mental health resources including the Psychological Health Resource Center, which is available 24 hours a day, seven days a week; the Military Crisis Line; and the Real Warriors Campaign.

The Department of Veterans Affairs has also launched Reach Out, a new campaign to let veterans know about how they can get mental healthcare as the 20th anniversary of the Sept. 11, 2001 attacks approaches.

Additionally, Task & Purpose Social Media Editor Kyle Gunn, a Marine veteran who served in Afghanistan, has compiled a list of organizations to help troops and veterans who are struggling, including Military OneSource’s peer-to-peer support and confidential specialty consultations.

One of the charities that Kyle listed is Give An Hour, which I can strongly recommend. After my father died, I was a mess. My good friend referred me to Give An Hour, where I was finally able to speak with a social worker who helped me get back on my feet.

I still regularly talk to a therapist, and I can assure you it helps when it feels like the world is ending. I don’t know if it’s related to Afghanistan at all, but I feel like I haven’t been able to do a blessed thing right all week.

On Thursday, I felt as hapless as Abu Hajaar, the imbecilic Islamic State group fighter, whose awful fighting skills were showcased in a 2016 helmet camera video posted by Vice. (He also inspired a meme.)

Just to reiterate: It is not abnormal or atypical to be feeling bad right now. Those who have served in Afghanistan and their families have been wounded by the sudden collapse of the Afghan government and security forces.

There is nothing heroic about suffering in silence. Pain cannot be treated by self medicating with alcohol and pills. Left untreated, depression can destroy marriages, careers, and lives.