Why did Australian special forces pose with a Confederate flag in Afghanistan?

The U.S. military may have effectively banned the display of the Confederate flag at installations around the world, but that doesn't mean the Rebel battle flag won't pop up on distant battlefields 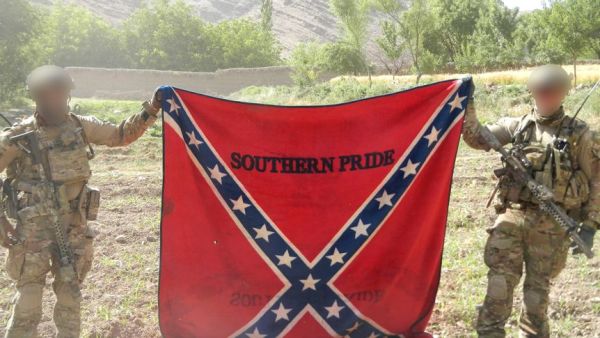 The U.S. military may have effectively banned the display of the Confederate flag at installations around the world, but that doesn't mean the Rebel battle flag won't pop up on distant battlefields.

The footage was reportedly included in a highlight reel for the Special Air Service Regiment's 3 Squadron following a 2012 deployment to the country as part of Operation Slipper, the Australian military's contribution to the International Security Assistance Force (ISAF) there.

According to ABC News, the flag was used to guide in a U.S. military UH-60 Black Hawk to pick up a gaggle of Afghan prisoners following an Australian-led raid.

An Australian Defense Forces spokesperson stated that the force “was not previously aware of the pictures and video, and so was not in a position to identify who was responsible,” as ABC reports.

This isn't the first time Australian special forces have found themselves in hot water over their flag choices: In 2018, ABC revealed that Australian soldiers had opted to fly the Nazi flag from a vehicle while on patrol in Afghanistan back in 2007.

The adoption of the Confederate flag by Australian special forces seems puzzling: After all, what connection does the SAS have to a civil war that took place half a world away more than a century ago?

Then again, the proliferation of the Confederate flag around the world is deeply unsurprising. According to a masterful 2015 analysis in The Nation, the Stars and Bars have become a fixture of distant battlefields since the end of the 19th century when the 'Lost Cause' mythos of the Civil War began to take hold.

“Starting around 1898, well before it became an icon of redneck backlash, the Confederate Battle Flag served for half a century as an important pennant in the expanding American empire and a symbol of national unification, not polarization,” according to historian Greg Grandin.

According to Grandin, the Confederate flag has spread to faraway battlefields in Cuba, Vietnam, and even Iraq at the hands of American troops convinced that the Stars and Bars remains a symbol of Southern honor rather than a racist rejection of federally-enforced equal rights. Indeed, the Confederate flag shows up in places like Brazil and Ireland without any connection to the U.S. military at all.

“Sometimes, the red-white-and-blue-crossed flag is seemingly displayed as kitsch, a kind of Americana,” writes cultural geographer Jordan Brasher. “Other times, its display conveys a political meaning more reflective of the flag’s origins in the slave-holding, Southern American republic.”

But why, then, was the Confederate flag adopted by some Australian troops?

“More likely than not this flag was given to them by an American unit,” Lt. Col. (ret.) Hal Johnston, formerly of the Indiana National Guard's 76th Infantry Brigade Combat Team, told ABC. “I'm stunned that an Australian special forces unit was displaying [it] … ignorance is not an excuse.”

There's another potential answer, though: the culture of Australia's special operations forces is arguably broken, rocked by a slew of scandals in Afghanistan that purportedly include the alleged execution of prisoners, the adoption of sadistic initiation rights for new recruits, and other instances of battlefield misconduct. And that makes SAS units more likely to invoke controversial or problematic imagery — like, for example, so-called “death symbols.”

“Some soldiers had used illegal violence on operations and that a systemic values shift among both troops and their commanders had occurred,” as C. August Elliot observed in Foreign Policy. “Soldiers were observing the laws of war only situationally, it appeared, sometimes adapting them after the fact to fit the circumstances of a violent engagement.”

The adoption of the Confederate flag may simply be indicative of a broader problem among both special operations forces and their commanders, one that cultivates dysfunction and hostility rather than discipline and restraint. Indeed, a 2016 study found that the Australian armed forces has its own racist history when it comes to indigenous service members, and it's quite possible that the adoption of the Stars and Bars is a reflection of that culture.

Either way, one thing is clear: Despite the Pentagon's effective ban, the Confederate Flag will live on in the dark corners of distant battlefields — and there's little the U.S. military can do to put that genie back in the bottle.