'They were not making or endorsing any political statement or activity.' 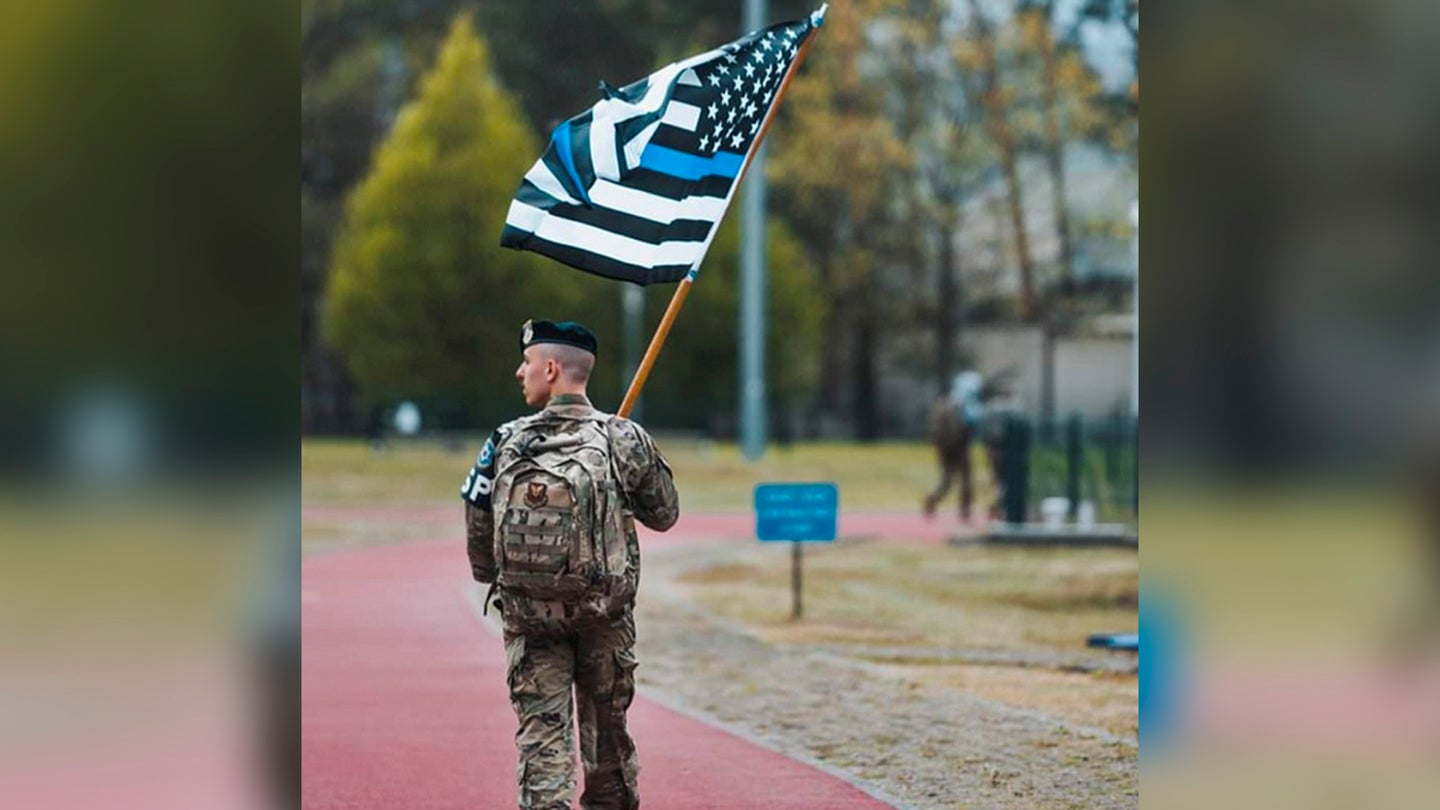 An Air Force unit in Germany has deleted images from its Facebook page showing security forces airmen carrying the ‘Thin Blue Line’ flag in solidarity with law enforcement after determining the flag had not been approved by the Defense Department to be flown at military installations, officials said.

“For this, we take full responsibility,” reads a May 11 message on Ramstein Air Base’s Facebook page. “All of our airmen are our greatest asset, and supporting them requires mutual respect, responsibility, and accountability.”

The airmen had carried the flag while in uniform during a 24-hour ruck march to celebrate National Police Week, as Jennifer H. Svan of Stars and Stripes first reported.

Security forces airmen, the Air Force’s equivalent of military police, have used the Thin Blue Line Flag for decades to honor law enforcement officers who have given their lives in the line of duty, said Air Force Lt. Col. William Powell, the top spokesman for the 86th Airlift Wing.

“It was a tradition for Defenders [security forces airmen]  to carry the flag to strengthen esprit de corps and show their support for the security forces community that protects and defends DoD installations around the world,” Powell said. “They were not making or endorsing any political statement or activity.”

But the wing’s leaders later realized that it had run afoul of a Defense Department policy that was issued last year amid the debate about whether Confederate symbols should be allowed on military bases, ships, and elsewhere.

Then-Defense Secretary Mark Esper issued a July 16, 2020 memo that listed all of the flags that troops can display, including the POW/MIA flag, military service flags, and ceremonial command, unit, or branch flags or guidons. The Confederate flag was notably absent from that list, allowing Esper to effectively ban the flag while going around former President Donald Trump, who vociferously opposed calls to rename Army bases that had been named for Confederate officers.

Since the Thin Blue Line flag is also not included in the list of approved flags included in Esper’s memo, the 86th Airlift Wing concluded it was not authorized to be flown by the military, according to Powell. “Base leaders are taking appropriate action to ensure personnel are aware of current regulations regarding the use of flags, Powell said.

However, at least one picture from 2018 of security forces airmen carrying the ‘Thin Blue Line’ flag was still online at the time this story was published.

It should be noted that Esper’s memo did not include a list of unauthorized flags, so the Defense Department’s policy does not specifically ban the ‘Thin Blue Line’ flag from being displayed.

Stars and Stripes noted that some members of the U.S. military community in Kaiserslautern, Germany had objected to the pictures of airmen carrying the flag, which is sometimes used by extremist groups even though it is meant to support law enforcement.

Telegram channels that claim to be affiliated with the Proud Boys include pictures and videos of the Thin Blue Line flag at the group’s rallies, said Mollie Saltskog, a senior intelligence analyst with The Soufan Group, an intelligence and security consultancy. “It is common that extremist groups co-opt and appropriate symbols and narratives that they identify as beneficial to further their hateful creed and recruit more members,” Saltskog said.

Featured image: A screenshot of one of the images deleted from Ramstein Air Base’s Facebook page that was shared on social media.