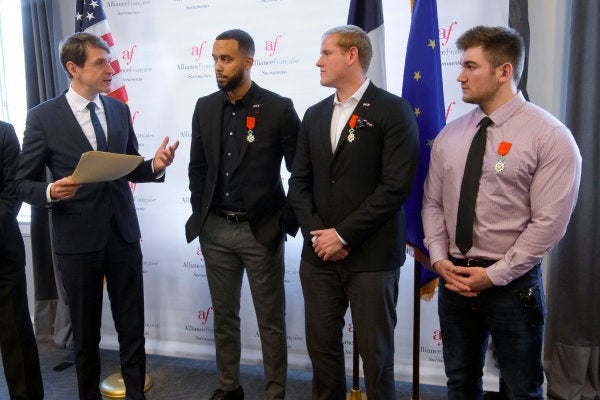 The three Americans who thwarted a terrorist attack on a Paris-bound train in 2015 were granted French citizenship on Thursday during a special naturalization ceremony in California, the Sacramento Bee reports.

Spencer Stone, Alek Skarlatos and Anthony Sadler were traveling from Amsterdam to Paris in August 2015 when a man opened fire on passengers. The three childhood friends quickly sprung into action and subdued the attacker after his rifle jammed.

“Our nation will be enriched by your strength, your culture and your personal experiences,” Emmanuel Lebrun-Damiens, the consul general of France in San Francisco, per the Sacramento Bee. “Today, France is proud to welcome you into its rich history.”

Two of the Paris train heroes are U.S. military veterans, Skarlatos of the Oregon National Guard and Stone of the U.S. Air Force. Stone in particular has cited his Air Force medical training as essential to the first aid he provided wounded passengers during the attack.

“We feel a certain connection with France,” Stone said during the naturalization ceremony on Thursday. “It's an honor that they're opening their arms to us like that.”

President Barack Obama had previously honored Stone with an Airman's Medal and Purple Heart, while Skarlatos received the Soldier's Medal, per Fox News

The three men played themselves in Clint Eastwood's 2018 film 15:17 to Paris based on their memoir recounting the attack.

SEE ALSO: Three Americans Who Pummeled Terrorist On A Paris-Bound Train Do It Again In New '15:17 to Paris' Trailer