Jose Sanchez lost part of his left leg in Afghanistan, but that didn’t stop him from conquering every footrace he... 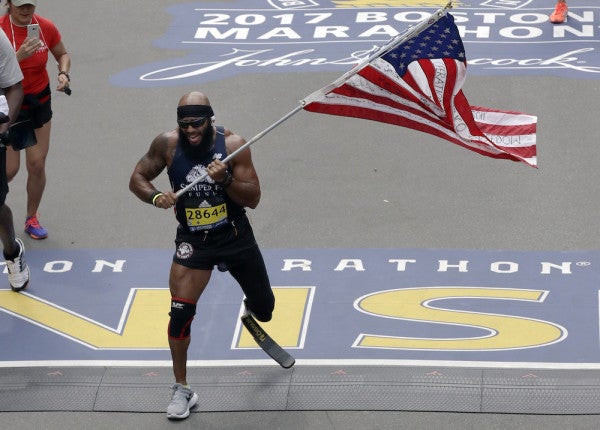 Jose Sanchez lost part of his left leg in Afghanistan, but that didn’t stop him from conquering every footrace he set his sights on.

Outfitted with a “blade runner” prosthetic, the retired Marine staff sergeant participated in the 2017 race as a member of Team Semper Fi, an organization founded to aid members of the U.S. armed services “who are dealing with life-changing injuries, post-traumatic stress or critical illness,” according to the Boston Globe.

According to local media, Sanchez ran his first marathon after his injury in 2015 in Washington, D.C., before participating in last year’s Boston Marathon, completing the 26.2-mile race in just under 6 hours. (He completed the 2017 race in just over 5 hours and 30 minutes, according to the Globe.)

Sanchez was injured by an IED while on patrol with British troops in Afghanistan in 2011, an incident that took most of his right calf and the lower half of his left leg, ending his career with the Marines.

“It was like being blindsided by a linebacker,” he told USMCLife before his first marathon in 2016. “It caught me off guard. So I was looking for who was attacking us. Once I realized we weren’t being shot at I looked down and saw my leg covered in blood. These two British officers I was on patrol with came to pick me up because they saw I was hurt. One grabbed me from my shoulders and the other from down near my legs, and my left leg just completely detached from my body.”

After four years of intensive rehabilitation and physical therapy, Sanchez began to take on new challenges, from the infamous Tough Mudder competition to the Boston Marathon, to help restore his confidence.

“I lost all of my drive. The injury totally humbled me,” he said of the recovery process. “I want to lead by example. I’m not going to go up to other amputees and be like, ‘You can do it!’ Instead, I hope that some people see what I’ve done and it invokes that fire within them to get over whatever is holding them back.”

Sanchez joined Team Semper Fi to help inspire other wounded veterans fighting to adjust to a post-injury life, but the flag he carried during Monday’s marathon was no mere prop. He told CBS News that he was given the flag by his fellow servicemen as a sign of of encouragement to the wounded warrior.

“I wouldn’t have been able to do it without you all,” Sanchez said. “Without the love and support of everyone here.”