A Marine who filmed the iconic Iwo Jima flag raising was killed on the island days later. His remains are still there

Copies of his footage have been shared far and wide. But Sgt. William Genaust is one of more than 80,000 Americans unaccounted for from past wars. 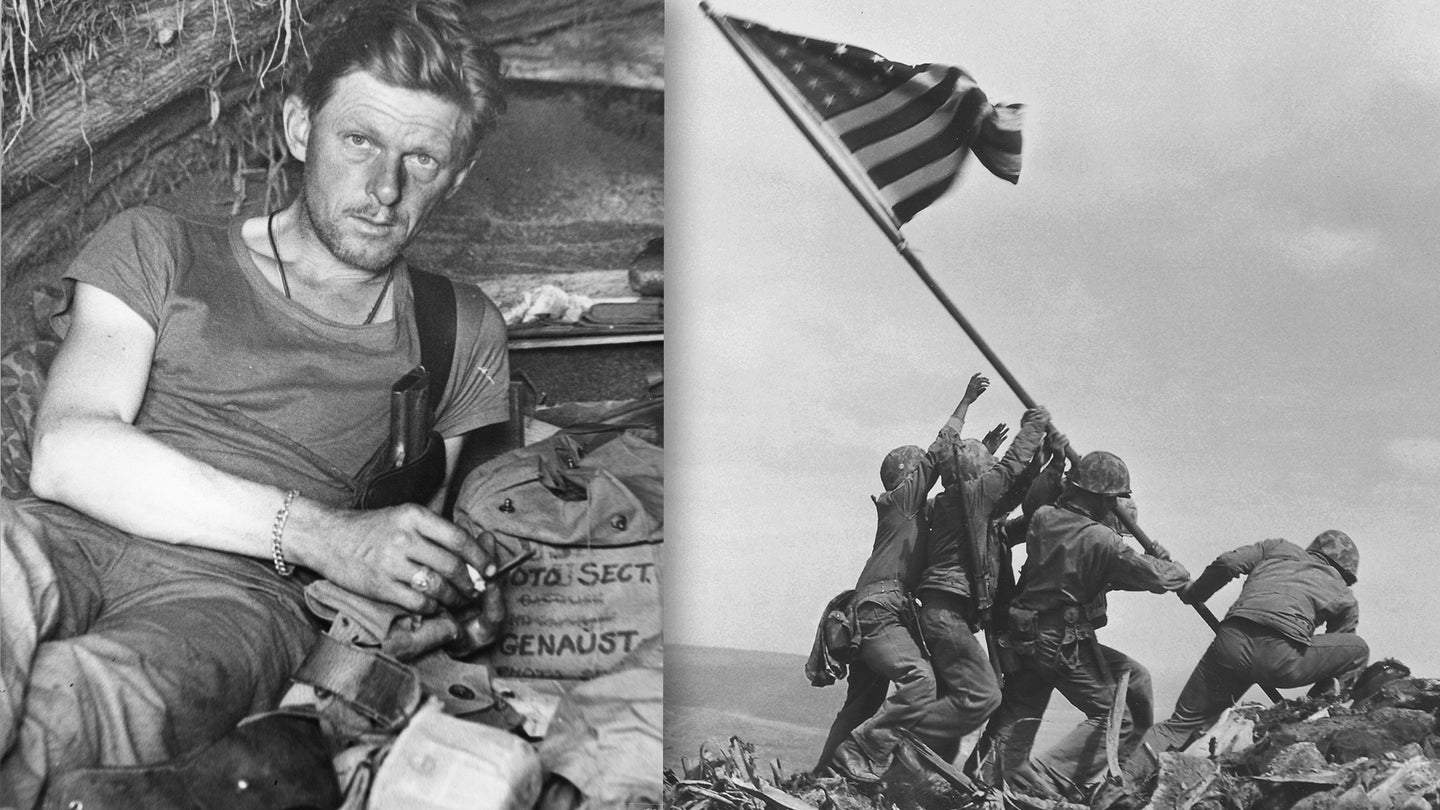 A Marine videographer who filmed one of the most iconic moments of World War II has been “unaccounted for” ever since.

Marine Sgt. William Genaust was a combat cameraman during World War II, who was on Mount Suribachi when six Marines raised the American flag in what would later become an iconic image of the war. But just days after Genaust got the footage alongside Associated Press photographer Joseph Rosenthal, he went missing in action.

Genaust is one of 81,500 U.S. service members whose remains have been unrecovered from war, and who the Defense POW/MIA Accounting Agency (DPAA) is working to bring home. Task & Purpose visited the DPAA last week to learn more about their mission, which involves recovering those missing from past conflicts including World War II, the Korean War, the Cold War, and the Gulf War; half are “presumed lost at sea,” according to the DPAA.

In the DPAA headquarters building on Joint Base Pearl Harbor-Hickam, Oahu, where scientific and medical experts are working tirelessly to identify human remains, is an enclosed bookcase of sorts. On the shelves are items recovered through DPAA’s missions, often found alongside service members: aviator sunglasses still in the case, a poncho liner, a camera, and film. There’s even a piece of a B-24J, a heavy bomber first introduced at the beginning of the war, signed by the “Rosie the Riveter” women who made it.

Maj. Leah Ganoni, a spokeswoman for the DPAA who showed Task & Purpose around the headquarters, said she’s often reminded of Genaust’s story when looks at those shelves.

“I think of that when I see that camera,” she said. “If we were ever to be able to find him, would you find a camera or a video camera on him?

According to his cousin Bill Morgan, Genaust had attended the University of Minnesota before joining the Marine Corps, and was married to a woman named Adelaide. In July 1944, he was wounded during the Battle of Saipan, Morgan wrote in the St. Cloud Times in 2017, and was recommended for the Navy Cross. Ultimately, the medal was denied because “photographer, not infantryman, was his official job description.”

Just months later in February 1945, Genaust was among the tens of thousands of Marines who landed on the beach of Iwo Jima on Feb. 19. The bloody battle on the Japanese island claimed the lives of more than 6,000 Americans.

Days into the battle on Feb. 23, Genaust and another Marine photographer were “ordered to ascend the volcano and look for subjects to record on film,” according to Morgan. They found Rosenthal doing the same, and as they reached the top of the volcano they found the six Marines raising the flag — the second flag raising on the island. Genaust “captured the second flag-raising with a 16mm moving picture camera with color film,” according to Morgan.

It was roughly a week later when Genaust is believed to have been killed. While a 2012 article in the Marine Corps’ magazine, Semper Fi, says the attack that killed Genaust was on March 4, 1945, the DPAA identifies him as being killed on March 3.

Either way, the article in Semper Fi says Genaust and his partner joined a patrol of caves on Iwo Jima because the weather was “too bad to shoot film.” In one account from a lieutenant who was there, quoted in Semper Fi, there was a Japanese soldier in one of the caves who was refusing to come out. The officer, Lt. John McLean, wrote that he urged the Japanese soldier to surrender, telling him “his cause was hopeless, and that he could surrender with honor, and that he would not be harmed. He looked up and gave a faint grin, but said nothing.”

McLean’s account goes on to say that the Marines noticed the soldier appeared to have “thin steel wires attached to his body,” and believed “he was booby-trapped and deliberately placed there as bait.”

“As soon as we made a move to seize him,” McLean wrote according to Semper Fi, “he would in all likelihood have set off an explosion killing us all.”

After more attempts to persuade him out of the cave, McLean said he gave the order to shoot the soldier so the Marines could retrieve a “pile of documents” that were inside with him. After doing so, McLean said Genaust led him and three other Marines into the cave as he was the only one with a flashlight.

Indeed, Ganoni told Task & Purpose during our visit last week that Genaust went into a tunnel on the island with two other Marines, which they believed to have been cleared of enemy forces. He volunteered to go with them because he was the only one with a light, Ganoni said. As soon as they stepped into the tunnel, they realized the enemy was still inside. Three Marines, including Genaust, were killed instantly.

“Basically as soon as they entered the tunnel, they came under fire,” Ganoni said. “And their unit … blew up the entrance to try and trap the enemy combatants, so the two that he went in with and [Genaust] were never recovered.”

McLean wrote in his account that upon entering the cave, “all hell broke loose” and there were “flashes of light and gunfire all around me.” Genaust’s partner who was with him that day, Pfc. Robert Campbell, wrote on the back of a Marine Casualty Card that Genaust was “struck by machine-gun burst at [point-blank] range” and “died instantly, “ according to Semper Fi.

“Bill met his death through helping, beyond the call of duty, others who were in a huge cave on the southwest slope of Hill 365,” Campbell wrote. “His body was still at the entrance of this cave and covered by tons of earth as we left the island.”

Indeed, information provided by the DPAA says Genaust is believed to have been killed by Japanese fire on March 3, 1945, and that his remains were “covered by rocks and dirt outside the cave entrance on the southwest side of a hill after demolition teams blew the entrance closed.” Morgan wrote that Genaust was “listed as missing in action” for a short time after his death. Researchers at DPAA believe that his remains are still in the rubble from that cave entrance, but that a researcher has been “unable to locate documents to further define the location of Genaust’s loss.”

Semper Fi reported in 2012 that three other Marines are still missing from that day.

While copies of Genaust’s footage that day on Mount Suribachi exist, the Washington Post reported in 2020 that the original footage is also missing. His film was taken by another Marine to a lab just days after the battle of Iwo Jima, but “appears to have gotten lost in a trans-ocean, cross-country bureaucratic and technical mix-up,” according to the Post.

“The whereabouts of Genaust’s original camera footage is still a mystery,” said Criss Austin, the supervisory motion picture preservation specialist for the National Archives, according to the Post. It “may be lost entirely, it may still be in another repository, or it may be hidden in one of the many locations it traveled to in the course of its multiple uses.”

While many service members from past conflicts may not be able to be recovered based on where their remains lie, DPAA has no intention of giving up anytime soon. The DPAA website says that remains may be deemed “non-recoverable” if evidence from efforts to recover the remains determines that they are. But that conclusion can always be changed, and if “new and credible evidence” is introduced, the agency could resume its recovery efforts.

“The mission is not about numbers,” the agency’s website says, “it is about the fullest possible accounting of all Americans who are still missing from past conflicts dating back to World War II. We will stay the course with this mission until the job is done.”