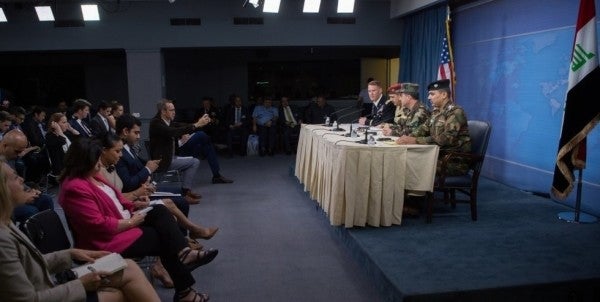 The Pentagon used to be known as the building that speaks, but it has been more than 300 days since an official Defense Department spokesman has conducted a televised briefing.
(Gerard Butler doesn't count.)

One day in the future, Acting Defense Secretary Patrick Shanahan will talk to reporters on camera from the podium of the Pentagon's briefing room, Defense Department spokesman Charles Summers Jr. vowed on Thursday.

However, Summers was unable to say when or how such a herculean feat might take place.

“You absolutely can expect him [Shanahan] to come into the briefing room and brief on camera, and when that happens I'd be happy to make you aware so that you're here,” Summers told Task & Purpose at an off-camera press briefing.

Former Pentagon spokeswoman Dana White last spoke on camera about what the U.S. military was doing on May 31. Then former Defense Secretary James Mattis held his last televised briefing in the Pentagon on Aug 28.

Although defense officials have spoken to the media on camera since then, none has held a televised press conference in the Pentagon briefing room, as had been standard custom prior to the President Donald Trump administration.

Summers insisted the Pentagon has not made any policy changes that require press conferences to be held off-camera – and out of sight of President Trump – yet he was unable to explain on Thursday why it has been so long since White's last televised briefing.

“I can't tell you why it's been so long but I know that we will go on camera and when we are ready to do that I will let you know,” he said.

When pressed by CNN's Barbara Starr about why the Pentagon has been unable in the past 300 days to have any defense officials take reporters' questions at a televised press conference, Summers reiterated his mantra that the building will speak again –
don't know where, don't know when.

“We continue to get information out to you all and we will brief on camera and when that is about to occur, I'd be happy to let you know,” Summers said.