What started out as a day of mountain climbing at the Boston Basin Trailhead a few hours northeast of Seattle,... 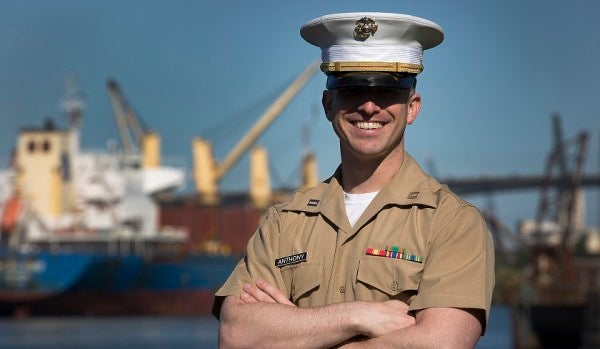 What started out as a day of mountain climbing at the Boston Basin Trailhead a few hours northeast of Seattle, Washington, turned into a rescue mission on a winding trail in the dark.

On Sept. 10, Marine Capt. Nick Anthony and his friends Colin Ayers, Melanie Stam, and Ben Stilin set off in the early morning to summit the 8,500-foot high Sahale mountain, according to a Marine Corps news release. Anthony currently serves as the executive officer at Marine Corps Recruiting Station Seattle, Washington.

After reaching 7,900 feet in elevation, poor visibility forced the climbers to find an alternate route, so they backtracked 1,000 feet down, then 600 feet back up over the course of four hours to another trail.

That’s where they came across Catherine Mitchell, a content project manager for Microsoft in Redmond, Washington, who flagged the hikers down. Mitchell was on a 7.4-mile trek through nearby Cascade Pass with two others, Norman Petty and his wife Barbara, when Petty’s breathing became labored and his legs began to give out.

Already 12 hours into their climb, Anthony and the others were exhausted, but they quickly followed Mitchell and after talking with Petty, a 77-year old Army veteran, they found out that he has Parkinson’s disease and had forgotten to take his medication that morning.

Fortunately, Anthony was both an experienced climber and had just returned from wilderness survival training. He quickly took stock of the group’s supplies and made sure Petty had a chance to eat and rest, but they had to move quickly — it was beginning to get dark.

Stilin went ahead to find a park ranger as Anthony and Ayers worked together to build a support system using trekking poles, jackets and gloves.

“Their ingenuity, creativity and perseverance was incredible,” said Petty of Anthony and Ayers. “I was worried I might fall off the cliff, but they took hold of the available materials and prevented that.”

Petty was able to take some of the pressure off his legs by draping his arms over the poles as they began to make their way down, but it was slow-going. Every 50 meters Petty would need to stop and catch his breath. After three miles of switchbacks over three hours, it was nearing 9 p.m. and getting cold.

The pass was becoming too narrow and their progress too slow, so the group stopped and set about building a makeshift litter to carry Petty. Fortunately, a larger group of hikers came down the trail, and together fashioned a litter from a hammock and a mix of climbing gear. Emboldened and with reinforcements, they continued on their way and by 10 p.m. reached the trailhead.

Petty was evaluated and treated, then released to his wife and headed home, thanks to the efforts of Anthony and his fellow climbers.

“This was a life-changing event,” Petty said. “We were so fortunate to encounter Washingtonians who, without any hesitation, decided to help us get down the mountain. They were giving, caring people and weren’t looking for accolades. Their reward was in successfully working together to bring all of us back safely.”