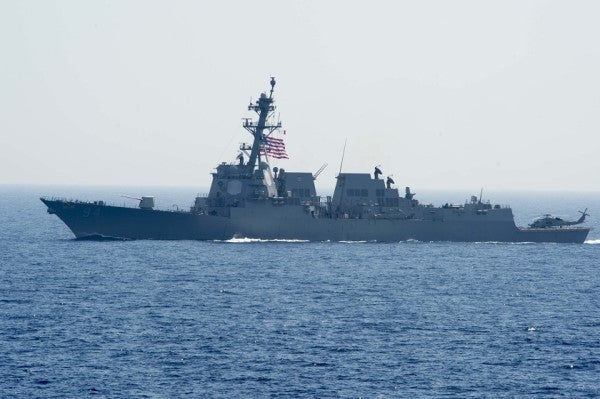 The attack was in retaliation for a series of failed missile strikes against the USS Mason, a U.S. Navy destroyer operating in the Red Sea off of Yemen’s southern coast. On Oct. 8 and Oct. 12, as many as three missiles splashed down in the water before reaching the USS Mason.

Related: US Destroys Radar Sites In Yemen After Attack On Navy Ship »

In the wake of the missile attack, the United States retaliated, marking the first time it has taken direct military action in Yemen’s year-long civil war. Here’s what you should know about the conflict thus far and how the U.S. military ended up in the middle of Yemen’s ongoing war.

Yemen has been embroiled in a civil war since September 2015.

Located on the southern edge of Arabian Peninsula, Yemen plunged into civil war when the Houthi forces, a Shiite rebel group, moved into the capital city of Sanaa and overthrew the country’s internationally recognized government and its president, Abd Rabbuh Mansur Hadi. Houthi forces are allied with those loyal to Yemen’s former president, Ali Abdullah Saleh, and backed by Iran, a Shiite power.

In March 2015, a Saudi-led coalition of Arab countries launched a military campaign against Houthi forces.

The mission, in large part, served as a counterbalance to Iran’s influence in Yemen. The coalition retook the port city of Aden and gained ground in southern Yemen. However, a ground offensive to retake Sanaa by the coalition would involve street-by-street fighting, and likely result in heavy civilian casualties. For the time being, the Saudi-led coalition has relied on air power, but the ongoing civil war has taken a heavy toll. To date, the war has killed more than 10,000 people, nearly half of them civilians, reports NPR.

Shiite fighters, known as Houthis, ride on a patrol truck as they chant slogans during a tribal gathering showing support for the Houthi movement in Sanaa, Yemen, Monday, Dec. 14, 2015.Associated Press photo by Hani Mohammed

The United States has become increasingly wary of direct involvement.

At the beginning of Saudi-led coalition’s campaign, the United States provided targeting assistance and logistical support, but has pulled back support due to rising civilian casualties caused by airstrikes.

Following an Oct. 8, 2016 airstrike on a funeral in Yemen’s capital that killed at least 140 people and injured more than 525 others, John Kirby, a spokesman for the State Department announced that the United States is reconsidering its support of the coalition.

“In light of the attack over the weekend, with the scrutiny that attack legitimately calls for, we are going to undertake additional reviews of aid and assistance that goes to Saudi Arabia,” Kirby said, according to an NPR report on the airstrike.

However, the attack on the USS Mason prompted the military to take direct action.

In response to failed the missile strike on the USS Mason, the USS Nitze launched Tomahawk cruise missiles, destroying three coastal radar sites within Yemen suspected to be under the control of Houthi forces on Oct. 13, 2016.

Following the U.S. military strike, the Pentagon released a statement declaring that future attacks on American warships may face a similar response.

“Those who threaten our forces should know that US commanders retain the right to defend their ships, and we will respond to this threat at the appropriate time and in the appropriate manner,” said Pentagon press secretary Peter Cook in a statement, according to CNN.

The recent strikes against the radar sites aimed to neutralize the Houthi rebels’ ability to track and target U.S. ships. Reuters reports that the rebels are still believed to possess missiles that could pose a threat to vessels in the area, and the U.S. officials expect that the rebels’ arms are supplied by Iran. The coastal defense cruise missiles fired at the USS Mason had considerable range, with one traveling more than two-dozen nautical miles before splashing into the Red Sea.