America’s Police Have An Escalation Of Force Problem

A car window shattered, sending glass flying at children in the backseat in Indiana. A man with a toy gun... 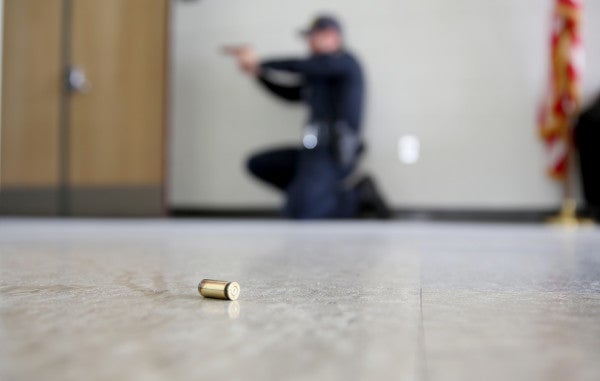 A car window shattered, sending glass flying at children in the backseat in Indiana. A man with a toy gun in a Walmart, shot dead with little interaction with police in Ohio. A flash grenade accidentally tossed into a sleeping child's crib in Georgia. A man reaching to retrieve his wallet immediately shot in South Carolina.

It sometimes feels we can't go a week without seeing the headlines or shaky cell phone videos depicting scenes we never imagined.

Coverage of this issue has been swift and widespread. Opinions of the problem are passionate and divided. But let's set aside for a moment the (valid) discussion about race relations in America.

Let's talk tactics. Because the real problem that America's police have is with escalation of force.

Escalation of force is a military doctrine that describes when and how much force should be used.

But the best example I ever heard of it came in Afghanistan in early 2012. As a combat correspondent with the 2nd Marine Aircraft Wing (Forward), I sat down with our commanding general, Maj. Gen. Glenn Walters (who is now a lieutenant general), to discuss the successes and failures of the deployment and what Helmand province would look like moving forward.

I had asked the general what he thought the unit replacing us would see with regards to operational tempo and he said, “The level and intensity will be determined by the enemy.”

There’s the brilliant nuance behind the escalation of force doctrine — you let the person you’re confronting determine the level of force.

Here’s why that works: Your level of force must be justified by the actions of the other person.

One of the ways the military expressed this in Afghanistan and Iraq was through the phrase “shout, show, shove, shoot.”

In a recent piece on Task & Purpose, Adam J. Tiffen outlined how escalation of force worked in a gun turret in Iraq:

Back in the United States, in these troubling incidents, no objective observer could reasonably claim that police exhausted all other options.

This isn’t a concept that is foreign to law enforcement, where it is often called the “use of force continuum.” But it’s one that seems continually violated. There’s no doubt in my mind that thousands of police officers across the country are doing great and honorable work every day. But this trend of failures and bad practices in communities across America is too important to ignore. We need more from our police departments — better training on when and how to use force, and more accountability when that standard is not met.