Marine Corps Special Reaction Teams act as a SWAT force within the military police community. Because of their specialized mission,... 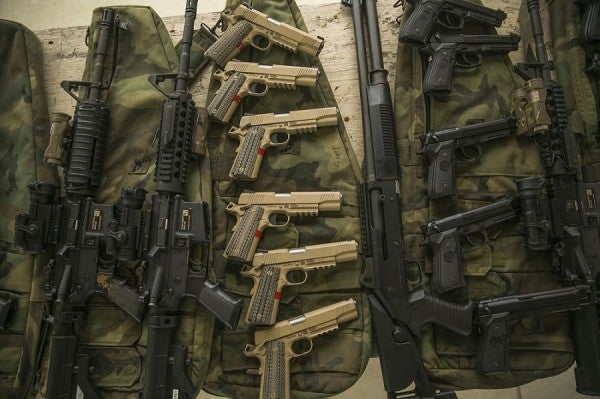 Marine Corps Special Reaction Teams act as a SWAT force within the military police community. Because of their specialized mission, they sport some pretty sweet gear. This recent Marine Corps photos of the SRT from III Marine Expeditionary Force showed off its kit during a training session at Camp Hansen, Okinawa. Lance Cpl. Royce Dorman and Sgt. Matthew Callahan provide a glimpse of what these teams carry.

Here are the weapon systems used by the Okinawa team, including the M4A1 rifle, the M1014 shotgun, M45A1 pistol, and the M9A1 pistol. The M45A1, a modern version of the classic M1911A1 .45 caliber pistol, is now being issued to special operations-capable units within the Marines like the Special Reaction Teams.

Special Reaction Teams are tasked with performing close-quarters breaches and entries, and a ballistic shield can help protect the pointman as they enter a room. Also seen here are two pieces of gear not common in the Marine Corps: the olive drab combat uniforms and the Diamondback Tactical plate carriers.