A Marine Says Her Religion Exempted Her From Certain Rules. Here’s Why She’s Wrong

There’s an old cliche that the military protects democracy; it doesn’t practice it. The military puts restrictions on certain rights... 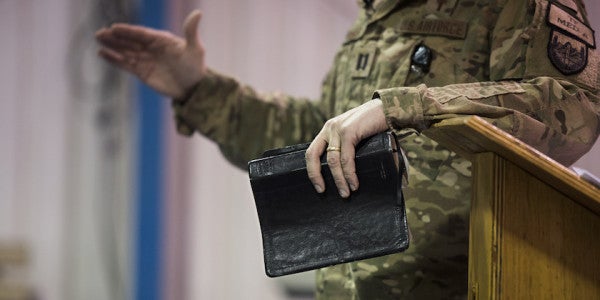 There’s an old cliche that the military protects democracy; it doesn’t practice it. The military puts restrictions on certain rights to preserve good order and discipline, even as it defends those rights for others. Occasionally this means that people can’t always do what they want. You can’t advocate for partisan political causes in uniform, for example. And you can’t shove your religion in other people’s faces, even with the Religious Freedom Restoration Act.

Monifa Sterling, a former Marine lance corporal, was kicked out of the Corps with a bad conduct discharge in 2014 for several UCMJ violations. She was far from a model Marine. Among the specifications she was convicted of were failure to report for duty, disrespect of a commissioned officer, and repeatedly disobeying the orders of a staff noncommissioned officer.

Sterling put a modified version of a Bible verse in large type in several spaces in her workspace. The line, “No weapon formed against me shall prosper,” was apparently in response to issues she was having with her supervisors. A reasonable person could see it as a passive-aggressive lashing out at her leadership. When her supervisor repeatedly told her to remove the verse, she disobeyed that order, so the supervisor removed the verse for her.

Because some of the orders she chose to disobey centered on her religious expression, an activist group is helping her appeal her court martial conviction to the U.S. Supreme Court. It’s very rare for the Supreme Court to hear a military appeal, but the contentiousness of this issue and its relevance to other cases involving the Religious Freedom Restoration Act may make that more likely to happen.

Sterling worked in a customer-service job at an ID center, so people conducting their official business had to read the verse. This made effectively made something that was supposedly for her own personal inspiration into proselytization.

The overarching military instruction on religious accommodation, DODI 1300.17, is designed to accommodate the observance of your chosen faith unless it conflicts with readiness, unit cohesion, or good order and discipline. That’s important to keep in mind. The military is committed to accommodating actual tenets of faith, as long as they don’t interfere with its mission. Dietary needs, for example, are catered to when practical. You can even apply for a waiver to certain uniform standards to accommodate some religiously mandated clothing.

In its decision on the Sterling case, the Court of Appeals for the Armed Forces made a couple of key points. It stated that your chosen faith has to actually mandate that you do something in order for it to be eligible for accommodation. That’s a very necessary distinction — if everything the spirit moves one to do has to be accommodated, it makes virtually anything any service member does up for religious interpretation and possibly protection.

That would open the door for abuse both by the deeply faithful and the completely unfaithful to make requests for accommodation completely unrelated to any formal religious doctrine. Any policy a service member didn’t like could become the basis of an accommodation request. Legitimate requests of accommodation would be trivialized. Sincere religious beliefs might get lost in a pile of requests to accommodate midday bowling by followers of Lebowski-ism.

Another key distinction the Court of Appeals for the Armed Forces made was that Sterling didn’t ask for accommodation in advance, or even when her supervisor told her to remove it. Sterling’s advocates, like Kelly Shackleford in The National Review, claim that requiring service members to preemptively ask for accommodation “… means a soldier, sailor, airman, or Marine might lose religious freedom for months …” In extreme cases, that might indeed happen, but that is an acceptable price to pay when the alternative is making almost any disciplinary action subject to second-guessing under various religious freedom grounds.

The military lives in communal, tight quarters. This means that sometimes someone exercising his or her rights is encroaching on those of others, even without trying. Whether your religion is Christianity, Judaism, Islam, Wicca, or even none at all, you will be able to practice it more easily without everyone else intruding with theirs as you go about your official business. That requires everyone to give reciprocal deference. If the military can accommodate religious practices without affecting others, and thus mission accomplishment, that’s a good thing, but it has to have limits, or else there will be a free-for-all. In that case, the ones most vulnerable are those practicing minority religions — and if minority religions aren’t protected, “religious freedom” becomes just an excuse to impose the most prevalent religions on everyone else.

If you think someone is justified in posting a Bible verse not just for her own viewing but for the viewing of others, would you feel the same if she had posted an alternative verse, be that from another faith or no faith? What if you had to stare at that message while waiting for your official paperwork? It could be just another mainstream faith’s message, like “Allahu Akbar,” but what about “Hail Satan” or “God is dead?”

If one faith gets to proselytize, they all do. That’s why the Court of Appeals for the Armed Forces made the right choice when it denied Sterling’s appeal. The military needs to be able to make reasonable restrictions on religion. If the Supreme Court hears the Sterling case and takes away that ability, the military, as well as religion, will suffer for it.