The Love-Hate Relationship Between American Contractors And U.S. Troops 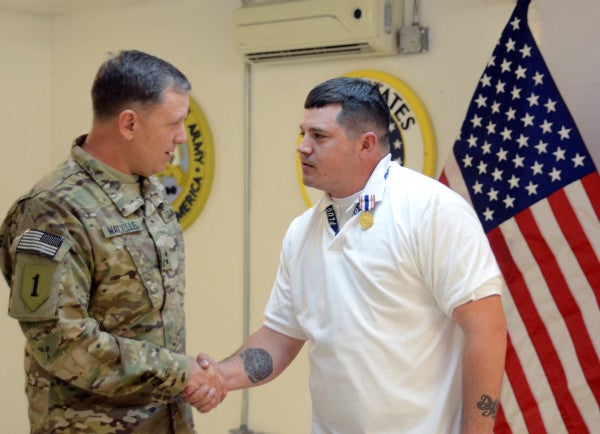 In American military circles, it’s often said that the American military “contractor” is a dirty word. And sometimes with good reason, too — the last decade has been filled with stories of fraud, waste, and blurred lines of warfighting roles. American contractors continue to infiltrate the most basic deployed military operations, and the relationship between the two forces have been strained, to say the least. To the military — America’s proud heritage of national defense — the contractor force is overpaid, under-regulated, and fails to meet the “mission first” ethos. For the contractor, the struggle to meet the unquenchable needs of the “all-in” military customer has created a culture of exceptionalism and over-defensiveness. In short, the military folks on the ground want their homegrown contractors to be more like them — unbending in their willingness to sacrifice all things in the name of the mission — while the contractors think their unique role should go unchallenged and extra considerations should be allotted to them.

These are mutually exclusive demands; a contractor cannot have defined work hours or a limited scope of what they provide if they are to give “everything” to the mission. Even more-so, the contractor cannot demand exceptionalism and then lament any efforts by the military to treat them differently than their uniformed counterparts. In truth, the military has neither the manpower nor the budget to train real experts in every necessary field. The contractor is necessary to fulfill the mission, in ways that are both functional and financial. After all, no one wants to sidestep his career just to spend a year learning how the aerodynamics of a surveillance balloon can affect the capabilities of its attached sensors. Expertise is needed, even if it only temporarily meets a demand that saves lives and increases productivity. That’s good old-fashioned supply and demand.

It may be surprising to some that the practice of government contracting has been around since the Revolutionary War. As explained by the Defense Procurement and Acquisition Policy website, “Contractors were hired as wagon drivers, and suppliers of beef, clothing, weapons, and basic engineering services.” The system of hired help was far more efficient than previous attempts at direct purchasing of goods and services.

So what has made the American contractor the red-headed stepchild of military ops in present day? To many observers, the almost-constant stream of controversial media reports during the Iraq War has brought this generation a negative perception of the issue. Reports of overcharges on food and labor, combined stories of six-figure incomes for doing junior enlisted-equivalent work, have garnered a level of distrust and questioning of the deployed lifestyle of contractors. From the perspective of the military, the contractor has gone from an efficient purchasing idea to a distrusted mercenary among heroes.

Today’s American deployed contractors, distinct from their military counterparts, are a pure volunteer deployment force. America’s contractors most often sign on to a contract whose sole intention or mission is deployment. A great number of those contractors repeat deployments for years, with only a few short weeks back home. That’s a hard sell for most companies, leading to some highly luring salary packages. The threat, combined with the exhausting work and less-than-modern living situation, must absolutely be compensated strongly in order to convince non-military personnel to make the commitment. It is a true exchange of comfort for cash, and many have absolutely no stateside employment waiting for them when they permanently return home.

Fueling negative perceptions, some companies have thrown in benefits not ever allotted to military members. Things like guaranteed days off, restricted work hours, or cell phone reimbursements have given rise to the idea that contractors may be getting an overly generous deal. In these situations, like rival sports teams from across state lines, the taunts and discourse are soon to follow.

It doesn’t take long for a tit-for-tat sort of routine to ensue. For example, the military restricts contractors’ access to troop housing, leading some of the plushly funded contractors to have their company to buy expensive housing containers with flat screen televisions. Then, some contractors start to crowd chow halls and take extended lunch periods, so the military restricts all contractors’ dining hours to smaller portions of the time offered to military members. Before the day is done, both parties have something to be upset about. Of course, many companies and units have plain explanations for their different restrictions or exclusive benefits, but this narrative and perception is not missed by the folks on the ground.

The irony and ridiculousness, of course, is that everyone is supposed to be on the same team. To their credit, most unit-deployed American contractors are veterans who have left behind their own families, again offering to defend the country they once served in uniform. Likewise, the many military members who supervise contractors are victims of the “maximization of resources” brought down on them by superiors. They are often guiltless in tasking their contractors with unusual work conditions, such as covering for a junior enlisted person who has been directed to perform guard or escort duty.

Even at the highest levels of politicking, overly complicated contracts are written by highly trained lawyers to maximize the revenue of a particular contract while minimizing the overall cost. What’s missing here is the details. Contracts must be appropriately accurate to avoid confusion. Bad employees must be rooted out, just as any professional business does, in order to prevent a soured reputation. Accordingly, deployed military members must accept responsibility for executing a contract that has been determined a fill a requirement — someone, somewhere, has determined there is a gap that cannot go unsupported. And, if it is not needed, send it back. Not everyone or everything meets expectations, and everyone is responsible for making sure budgets are well spent. All parties are responsible for being exactly that — responsible.

In the end, what cannot be mistaken, overstated, or ignored is that deployed American forces, whether military, civilian, or contractor have put their lives at risk. Men and women in combat, regardless of the color of their clothing, don the same gear in a rocket attack. I once visited a contracted surveillance balloon engineer in Afghanistan who climbed the balloon tether in order to keep the military asset’s eyes on target, and was subsequently shot by a sniper, costing him his eyesight. The man, lying in a hospital bed with bandages over his eyes, only wanted to know if the boots had made it to the target safely.

History has shown that effective and efficient military operations rely on steadfast support from contractors to enable a relentless military fighting force. Change can happen. A better understanding of each other’s sacrifices, mission, and a severe hit of mutual respect can make a difference. Upstream feedback does, indeed, influence change for those who are willing to give it.

Do not be mistaken, the continuing evolution of overseas operations, and the need for continued support of those operations, will continue. The world’s conflicts are sure to see plenty more of the U.S. military and its contractors, and their love-hate relationship.