Why We Should Be Talking About Military Contractors With PTSD

As military personnel numbers are reduced across the armed forces, the Defense Department is turning to civilian contractors to fill... 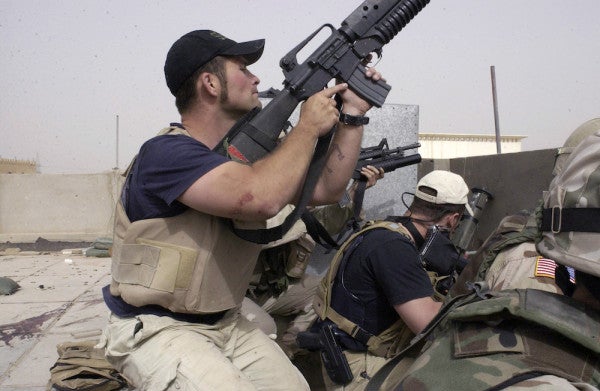 As military personnel numbers are reduced across the armed forces, the Defense Department is turning to civilian contractors to fill the readiness gap, but this decision comes at a cost. More and more contractors entering into combat environments are experiencing symptoms of post-traumatic stress when they return home.

In 2013, the RAND Corporation published a study called “Out of the Shadows: The Health and Well-Being of Contractors Working in Conflict Environments” to determine the rate of post-traumatic stress on civilian contractors in combat environments.

Regardless, in an interview with Task & Purpose, Molly Dunigan, one of the authors of the study and a political scientist with RAND, “The critical thing to take away from this study is that a significant number of people working on the ground in conflict environments are suffering from these problems, and many of their deployment-related health needs are not being addressed.”

More striking perhaps is that of those 660 surveyed, 84% were combat veterans. It is unknown whether post-traumatic stress rates could be stilted because contracting companies failed to properly identify veterans suffering from the mental health issues prior to civilian deployment.

Over the last decade, RAND has performed a number of studies on contractors, especially those in the field of private security, as an essential component of the U.S. total force structure and operational scope and readiness.

Dunigan said that the impetus for the study came in 2012 when “State Department personnel were complaining about deployment related stress issues and how that was becoming a bigger problem because there was not as much attention paid to civilians who had been deployed.”

She added, “RAND actually funded the study, sort of as an exploratory measure.”

Although there have not been updates to the study or follow-up research as of yet, Dunigan said the initial research garnered much-needed attention and she hopes it will spark more dialogue on the issue.

“We have not really studied whether there are any improvements in the situation … we would like to get more funding on this,” she said.

Since 2001, private contractors have deployed around the world to support U.S. troops and allied forces in Iraq and Afghanistan. Their operations have ranged from base support and maintenance to logistical supports, transportation, intelligence, communications, construction and security services.

“Given the extensive use of contractors in conflict areas in recent years, these findings highlight a significant but often overlooked group of people struggling with the after-effects of working in a war zone,” Dunigan said in the 2013 release.

Although treatment for post-traumatic stress to service members and veterans is available, contractors surveyed said they do not have comparable resources.

One obstacle is deciding who is responsible for these contractors and their well-being.

Though the companies that employ civilian contractors are private, the operations are often performed under or in tandem with the Defense Department.

In order to provide preventative measures and post-combat treatment of post-traumatic stress, companies or the government must decide on how to foot that bill, and who is responsible.

And although contractors are meant to be protected from combat-offensive environments, the report suggested that they they may be exposed to such stressors as gunfire, improvised explosive devices, serious injury, kidnapping, the deaths of fellow personnel, and the psychological aftermath of killing regardless.

Unfortunately, the survey revealed high rates of perceived stigma regarding post-traumatic stress among the contractors. Fear of embarrassment and job loss prevented a number of those surveyed from getting treatment.

“Amongst those who met the criteria for post-traumatic stress disorder or depression, 70% thought that seeking help for this type of problem would harm their career,” Dunigan said.

Though the Defense Department has worked to establish mental health services for veterans over the last decade, civilians serving on the front lines have been left more or less to fend for themselves.

Even as late as March 2015, Defense News reported that the 10,000 U.S. troops in Afghanistan are vastly outnumbered by the 39,600 contractors supporting their training and advising mission.

As the department continues to employ more contractors in combat environments, and veterans seek second careers in private contracting, more resources to prevent and treat post-traumatic stress will be needed to maintain operational readiness.