Imagine that you are a non-commissioned officer in the Iraqi Army. You went to basic training in 2009. During your... 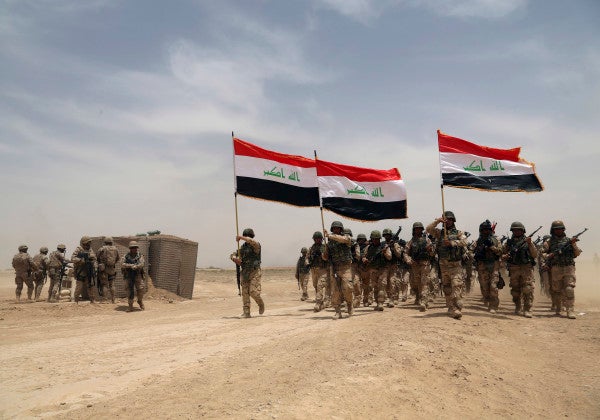 Imagine that you are a non-commissioned officer in the Iraqi Army. You went to basic training in 2009. During your initial training, Multinational Security Transition Command-Iraq provided you with equipment — uniforms, weapons, vehicles — and trained you on the tactics that would enable you to effectively employ them. You left basic training proud of your decision with confidence in yourself, your equipment, and your army.

Unfortunately, your experience has left you wondering whether you made the right choice. You are stuck in garrison checkpoints dependent on the local economy rather than the Army for sustainment. You have not conducted live fire training since the Americans left in 2011. Officers in your unit manipulate their own leave schedules, use their position for personal gain, and fail to inspire confidence due to their lack of caring or incompetence.

You watch as soldiers go AWOL, but still get paid, while others pay their commanders to go on leave. And what about your pay? You used to receive your paycheck via electronic fund transfer, but that ended in 2011 too. Now the Ministry of Defense issues money to the commanders of units, who skim off the top before they pay you.

That equipment you had is now broken. Whatever fuel or spare parts that could have helped you maintain it has been sold on the black market for extra cash. In 2014, you know enemies are out there ready to exploit the disconnect between the people, their army, and their government. In the back of your mind doubt creeps in. Besides the lack of resources and training, your unit lacks faith in its leaders. When the fighting starts, will your commander fight or order a retreat? When you run out of bullets will the pride in your country resupply your food, fuel, and ammunition?

Furthermore, no one in your unit received medical training since your basic course — even minor injuries could become deadly if you can’t get the local hospital in time. And should you survive, no financial incentives or pension exist. You are simply unemployed.And that’s a better scenario than the alternative — that you don’t survive — because if you are killed in action, the government will not assist your family.

And then the day comes. A firefight with a non-uniformed enemy ensues; your weapon jams, your truck stalls, your commander flees, and the army is not supplying you to sustain the fight. Running away is not an act of cowardice, it's your only option for survival. It’s better to live to fight another day than die in place. Thus, the failure of the Iraqi army should not be solely attributed to individual soldiers. The systemic failure of administrative systems as well as senior military and government leaders also directly contributed to this downfall.

The description that Yasir Abbas and Dan Trombly provide about the collapse of the Iraqi army’s 2nd Division is revealing and widely applicable to the entire Iraqi army: “Corruption, neglect, and a shortfall of combat-effective resources and personnel crippled the Iraqi military’s capability and widened ISIS’ range of strategic options in Ninewa province.” On paper, the Iraqi security forces look like a modern fighting force, but years of corruption and resource mismanagement has left the military undermanned, undertrained, and under-equipped, despite false reports to the contrary. As soldiers tossed their weapons, abandoned their vehicles, and fled the battle, critics were quick to blame the Iraqis for a lack of motivation without investigating the underlying administrative failures that set the conditions for even the bravest of fighters to flee in order to live another day.

This lack of cohesion among soldiers has a direct effect on individual courage and bravery. Even the most spirited individuals will find their motivation sapped by group dynamics that promote desertion, dishonor, and deceit. It was precisely these soldiers and officers of the Iraqi army whom I found myself partnered with this summer as a member of 3rd Brigade Combat Team, 82nd Airborne Division. I served as the brigade Iraqi security forces development officer from June to early August 2015 in between semesters of teaching American foreign policy in the Department of Social Sciences at West Point.

If what I observed about the lack of bureaucratic performance is true, then the Iraqi army’s lack of motivation to fight is not simply a cultural pathology, but a quantifiable result of poor governance, bureaucratic corruption, and failed combat readiness programs. How can we influence the Iraqi army’s motivation given these constraints? The will to fight must be built from the pragmatic side of logistics, pay, and equipment just as much as it requires a culture of small unit cohesion, inspirational leadership, and combat experience that can’t be imposed by outside advisors or partners.

Shared adversity and trust will help units build cohesion, develop confidence, and display courage in the face of a ruthless enemy, but even the most committed of soldiers will still require training, weapons, and equipment to accomplish their mission. But even the best resources won’t result in battlefield success with dedicated junior and senior leaders that can inspire soldiers to employ their training and equipment in the face of a ruthless enemy. It is clear America can’t provide Iraq with Iraqis, and it is clear that training sites and weapons sales have not yet been enough to eradicate the fighters of the Islamic State.

To boost Iraqi army motivations to defeat the Islamic State in battle, administrative reform must occur. Focusing military training efforts on the logistics and administrative task of a bureaucracy doesn’t brief as well as air strikes or live fire combined arms maneuver training, but it may be the missing piece for a more successful partnership strategy between coalition forces and the Iraqi army.

Security sector reform is already part of America’s partnership mission in Iraq, but more can be done to help the Iraqi army improve its logistical procedures, its management and oversight of military equipment sales and transfers, and the coordination between its training and operational commands. This requires an expanded partnership for coalition forces within the Iraqi Ministry of Defense.

Currently our partnered forces help track supply requests through the Iraqi chain of command up to a certain point, but then lose visibility on much of the internal decision making that occurs in the inner circles of the Iraqi defense establishment due to an absence of coalition partners in these meetings. Having a more robust logistic partnership will not only improve the distribution of this equipment it will help build confidence that the Iraqi army is functioning properly.

To achieve this, existing advise and assist teams to Iraqi logistic organizations need to be expanded by coalition forces. The information gathered from these teams should be widely used to guide key leader engagements at the highest levels of Iraq’s defense sector. Additionally, operational advise and assist teams should accompany their Iraqi partners to Iraqi army logistics meetings. Finally, developing a robust partnership system to account for the purchase, storage, and distribution of supplies will give coalition forces a better understanding of the capabilities of the Iraqi security forces and give the Iraqi army a better understanding of how its own resource management contributes to its soldiers’ will to fight.

The United States already has experience with security sector reform and has published doctrine to define the relationship between the Department of State, U.S. Agency for International Development, and Department of Defense. In it, these agencies are tasked to work together to provide reform efforts directed at the institutions, processes, and forces that provide security and promote the rule of law in a host country. This model of sustained partnership could be adopted for the Iraqi security forces, but it needs to be culturally informed and politically feasible. It requires coalition forces to prioritize the tedious logistic and sustainment work necessary to equip and train an army over the more exciting and more newsworthy missions to kill the enemy and seize territory.

Now imagine it’s 2021. You were retrained in 2016 and you fought bravely to eradicate ISIS because coalition forces advise, assist, and partner operations with Iraqi units to conduct sustainment and live fire training. You realize the newest soldiers graduating this training never lived under Saddam Hussein, were too young to remember the violence from 2006-2008, almost lost their will to fight in 2014, but now can be proud of their affiliation with an Iraqi Army that trains hard, cares for its soldiers, and protects its people.

It seems this can only be a reality for Iraq if U.S. and coalition forces currently deployed in support of Operation Inherent Resolve focus partner-capacity and advise and assist missions on comprehensive institutional reforms. But this organizational and culture change effort will have to occur while Baghdad and its allies simultaneously fight a war against the Islamic State and a competing entity in the name of popular mobilization forces compete with the government and the army for people and resources. This appears to be an extremely difficult task, but one that can be accomplished if the government of Iraq makes this mission the real priority for America and its allies.