Here’s Why We Failed To Adequately Train Iraq’s Army

The news on Iraq and its security forces poor performance against the Islamic State in Iraq and the Levant is... 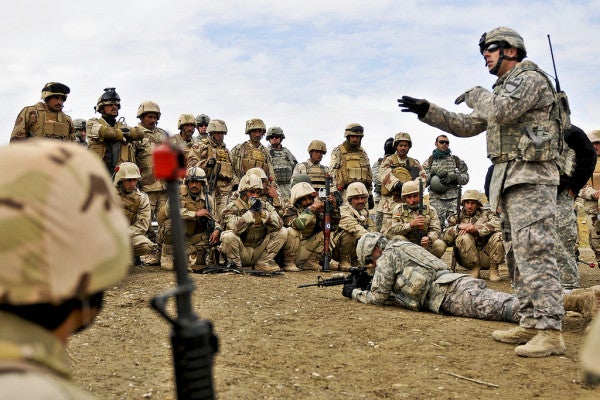 The news on Iraq and its security forces poor performance against the Islamic State in Iraq and the Levant is not good. Composed of roughly 6,000 men, ISIL has blitzed across northern Iraq and captured a number of cities. It now threatens at the gates of Baghdad. With a force the size of a brigade and a half, ISIL is thumping Iraq’s military of over a quarter million. Iraqi Security Forces are so intimidated that they are dumping their uniforms to blend in. This situation has a post-2003 invasion, pre-2004 full-blown insurgency feel to it.

A crumbling ISF comes as a disappointment after so much U.S. commitment. For most of the Iraq War, a U.S. priority was to rebuild Iraqi military and police forces. Partnering with ISF was the key to American withdrawal. To that end, conventional U.S. forces were modified from their original purpose to conduct military-to-military training. The phrase “by, with, and through,” became a common refrain in mission statements. The U.S. Army — so skilled in its own training — could train any formation in martial skills. But it was a plan touched with political haste, some hubris, and the ill-fated method of solving strategic problems with a tactical solution.

The end of operations in 2011 led to slashed defense funding and ultimately a drawdown in U.S. Army force levels. But the Army did not want to set loose the talent and lessons learned from years of partnering and training with foreign militaries.

Enter the Regional Alignment of Forces. This new way ahead for U.S. land power focuses on creating culturally savvy, regionally engaged forces for geographic combatant commanders to apply within their areas of responsibility. Soldiers, not just linguists and special operators, but infantrymen, redlegs, signaleers, and others would learn another language, practice some customs, and deploy to train with foreign armies.

Sure, there is much more to RAF than this (one may be hard pressed to tease out those details beyond bulletized Army-speak), but creating units to match up with a combatant commander’s overlay on foreign lands is its main effort. This concept gives commanders at all levels some focus and predictability in training for future missions. RAF also facilitates theater security cooperation. Under theater security cooperation, units are injected into areas to bolster partnerships so future conflicts are curtailed or deterred. Instead of a massive deployment to end a regional conflict, the Army maintains a stronger, more visible global presence, which nips those conflicts in the bud. It is almost as if the police have to get out of their cruisers, walk a beat again, and get to know the crime-prone neighborhoods.

Considered objectively, RAF is exactly what the Army did in OIF, particularly since the surge was implemented and population-centric counterinsurgency ascended as the warfighting doctrine of choice. Once old lessons from previous counterinsurgencies were codified into the FM 3-24 in 2006, foreign cultures, languages, and relationships garnered greater importance in how the Army operates. Commanders were tested on key leader engagements during a brigade’s final training exercise before a deployment. Soldiers were taught to keep from showing their heels when sitting, to place their hands over their hearts when greeting their Iraqi partners, and to expect several cups of chai before getting into any serious business. “Inshallah” became nearly as ubiquitous in the ranks as “hooah.” The conventional Army adopted cultural appreciation, language skills, and a partnership focus years before RAF was a thing.

The problem is that despite all of the regional-specific training the conventional Army received and military-to-military training it applied between 2007 and 2011, little of it can be correlated to any substantial growth within the ISF. The evidence is in the current news. There are a number of reasons why the Army was largely unsuccessful in preparing ISF for the fight it now faces. One may be that the training we offered was centered on how to operate as the U.S., not Iraqi, Army. Another may be that when the Iraqi showed any tactical ability, it was more to impress the American noncommissioned officer standing behind him than to defend against an opposing tribe or political belief. A third is that the American soldier’s planning doctrine is too Western and incongruent with Eastern methods. Fourth, despite our best efforts over the years, courage and effective, trustworthy leadership may not be trainable. Overall, no matter how culturally savvy we were back in the OIF days, the training and partnering we conducted never truly translated. The military decision-making process and patrolling may have been explained in Arabic, but never fully modified from the original Western school of thought for Iraqis to fully absorb.

So if the 2007–2011 version of RAF (proto-RAF) essentially failed after years of application, billions of dollars, and the full force of the U.S. government, how can the RAF of 2014 be expected to work anywhere else? The answer: probably not well. Proto-RAF focused the attention of most of the U.S. military on one country and still left a hobbled host-nation military dependent on support. 2014 RAF provides only a handful of units to each geographic combatant command and hopes for improved results. In both proto and 2014 RAF, conventional units were molded for this new, non-standard purpose. The problem here in both is that conventional forces are trained and operate best as designed. Anything more is extracurricular, takes core skills training time away from the unit, and cannot be expected to be effective within tight timelines. It may be too much to ask an infantry brigade to become an expert on, say, Southeast Asia and maintain its core competencies as an infantry brigade at the same time. It may be too much to ask with constant, annual personnel turnover. And it may be too much to explain to a young infantryman — who joined the Army to shoot, ruck, and jump out of airplanes — that language proficiency and foreign cultures are just as, if not more, important.

But perhaps the most important reason why 2014 RAF may not be effective is that the skills we want to train our partners on may be too geared toward the American way of war and have little applicability to the other nation’s army. Our formations may be culturally savvy, but our Army culture may translate poorly to other armies.

Certainly, RAF is our land power narrative right now and so much funding and subsequent relevancy is tied to the concept working. Staying globally engaged on the ground has a better chance of deterring conflict at any scale than zero engagement. And if a conflict that involves the United States does bubble up despite our best efforts, at least the Army has a cadre of culturally aware soldiers with some grasp of the regional dynamics and personalities. In the end, a better alternative to RAF may not exist. But maybe the United States as a whole, not just the Army, really needs to reevaluate what it wants its military to do globally short of retrenchment and total isolation and examine if RAF is the right answer.

Brad Hardy is an active duty Army major. As a battery commander in Kirkuk, Iraq, in 2009, he helped train Iraqi police. The opinions expressed in the article are solely those of the author and do not reflect those of the U.S. government, the Department of Defense, or the U.S. Army.