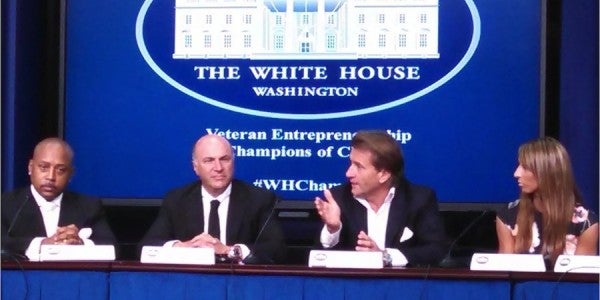 On Wednesday, Aug. 27, three members of ABC’s reality competition series “Shark Tank” — Daymond John, Robert Herjavec, and “Mr. Wonderful” himself, Kevin O’Leary — attended the White House's Champions of Change veteran entrepreneurship event. The Champions program highlighted 11 veteran and spouse owned-businesses and nonprofits from multiple industries and geographies. From over 600 applications, these founders were chosen for the success and impact they are having on the veterans community.

The Sharks spoke to attendees about their investing philosophies and offered advice on starting out in entrepreneurship. John brought up how he invests in individuals first and products secondary. In contrast, O’Leary said he invests in a good product, but it’s up to the entrepreneur to make the business grow. According to O’Leary, veterans have the skills and attitude needed to give themselves a 20-30% better chance of success over their civilian peers. This mean finding a good product with a veteran founder makes for an easier investment decision.

One such example is RuckPack energy drinks founded by Maj. Robert Dyer. Dyer went on “Shark Tank” in 2012 and received an initial investment from O’Leary and Herjavec. In telling Dyer’s story, O’Leary offered to attendees some business advice: Create a solution, not a company. RuckPack’s product was a solution to the problem of not having the right energy drinks while deployed. Dyer and his team did not create RuckPack because they wanted a company, but because they needed a solution to their problem.

A second key point addressed by the Sharks and in discussions during the reception was that veterans tend to possess a level of humility that may hold them back. Herjavec’s point was that veteran entrepreneurs need to find the sweet spot between being humble and “…an arrogant SOB.”

John advised that when selling a product, find some “confident humility” and pitch your company, making sure to highlight all of your accomplishments as a service member and as an entrepreneur. Along the same line, make sure to use that confidence to work the veterans network. Reach out to established business owners and talk to them about their successes and mistakes. Simple suggestions from someone who has been there before will make a huge difference in the success of your business.

The more veteran entrepreneurs I meet, the more I find they want to pay it forward and help those coming behind them. Use all the power of the network to succeed and remind people of the success veterans are having after their transition to civilian life.