How I Applied The Rules Of Engagement To My College Experience

Ronald Reagan had it right when he said, “Some people spend an entire lifetime wondering if they made a difference... 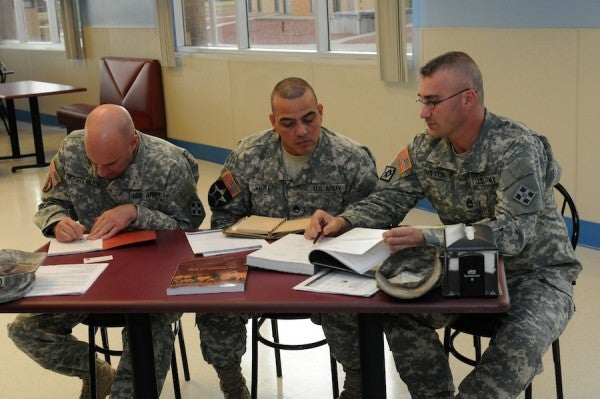 Ronald Reagan had it right when he said, “Some people spend an entire lifetime wondering if they made a difference in the world. But, the Marines don't have that problem.” When I discharged from the Marine Corps in 2005, I really felt I had made a difference in the world, but I still had the rest of my life ahead of me. One of the first goals I set was attaining a college degree since earning money through the G.I. Bill to put toward tuition was one of the main drivers for me to join the service.

I stuck with community college for two years before switching to a four-year institution. The transition was not what I expected. College has become such a business that it seems advisors are more interested in directing you down the longest path possible to graduation instead of the one that best fits you as a student. On top of that, going to school with a bunch of 18-year-olds who have never left home makes for some challenging interactions.

I did not feel much resentment from the traditional students around me; however, I did feel as though my student peers had it way too easy. I was surprised how few students I went to college with also had jobs. Further, most seemed oblivious to the fact that a war was going on the entire time they were in school or even the fact that a veteran of that war was sitting right next to them. At times, even the professors seemed clueless.

This was probably the most difficult thing for me to deal with. I could learn new math skills, how to write technical reports, and I certainly could make it to class on time, but the true challenge was relating to the civilian student body. I was only a few years older than most of these people, but I felt my outlook on life was drastically different because of my military experience.

The most difficult challenge for most veterans attending college is going to be adjusting to the student civilian community. You have to prepare yourself to hear opinions that are going to seem absolutely ridiculous to you, especially in a history class or English class where open debate is encouraged. You have to tell yourself there is no reason to correct these opinions; that these students will learn one day how insensitive their comments are or how unrealistic their point of view. You have to interact with people who cannot make it to study groups on time and who may not have the discipline they need to succeed. You have to interact with individuals who may not love America as much as you. You may even run into individuals who do not love America at all. Just suck it up and keep your opinions to yourself if you cannot be respectful. You are not only representing yourself to the public, you are also representing all veterans. How you handle yourself will mold the reputation of veterans everywhere. We all have a stake in that reputation and must all do our part to preserve it.

So, if you’re planning on going to school, be prepared to study and put in extra hours during exam times. But, when it comes to dealing with the people around you, be prepared to adapt a solid set of rules of engagement — you’re going to need it.