How I Survive My Own Personal Armistice Day

So here we are again. Veterans Day is upon us. The parades, the awkward “thank you” handshakes, and the free... 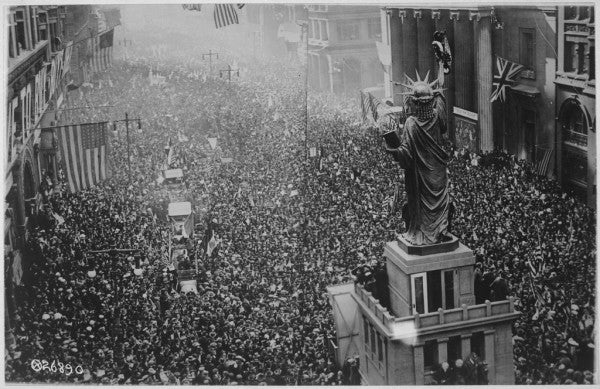 So here we are again. Veterans Day is upon us. The parades, the awkward “thank you” handshakes, and the free meal at some chain restaurant you normally don’t frequent otherwise, but hey, breadsticks are breadsticks. Remembrance Day in many countries, it’s when we remember and honor those who gave the ultimate sacrifice.

Also: happy Armistice Day, everyone. Hostilities in World War I ended 96 years ago, several months before the signing of the Treaty of Versailles. So hey, that’s great news, that the day is also representative of a relative peace. The next war didn’t kick off for nearly two decades. Different times back then, I suppose.

But today is a day of honor and remembrance, so we won’t reflect on how different these times are from those lest we get all bummed out about ISIS. Those who came home know all too well those who have made sacrifices and those who continue to do so. By and large and for better or worse, we are done affecting the national peace process.

The day we veterans left our respective services for terminal leave is, in effect, our own personal Armistice Day. I celebrate mine with cake, as my cats aren’t really into parades. I went on terminal leave right around this time in 2012, effectively ending all hostilities between myself and the Army exit process. And true to form, the Treaty of DD-214 was not signed for several months.

When I left, I decided to enjoy my freedom for a bit. Despite the stress many of us go through, there is still that liberating period right when we first get out of “No one will be inspecting my outfit at some terrible hour tomorrow.” I went through the boom period most experience at the end of turmoil, excited at the possibilities. Travel. Old friends. Grand times to be had.

But my proverbial Jazz Age would ultimately hit reality. My stocks didn’t tank as they did in 1929 to trigger the Great Depression; instead I was stuck with the federal job market crash and the Great Sequester. The fun was over, and it hit me hard. The job I’d secured was still there, only they didn’t know when I could start or when they could pay me, so that did me no good. It was time to pick myself up and move on.

But first, I wallowed. I didn’t know what to do, really. I had rent to pay and cat mouths to feed. They were dark days, indeed. There was enough stress that my nightmares could periodically shift from terrible days in Iraq to terrible days on the subway, navigating job hunts and school registration and ‘what do you mean you didn’t get my rent check?’ and ‘when do I suck it up and ask my parents for a little money?’

By the first anniversary of the end of my hostilities, I was hanging on by a frayed thread.

But fast forward, I made it through. Because after every Great Depression is a New Deal, and like the politics of FDR or not, it worked to give some energy back to a faltering country.

I needed to re-energize myself, and this was the way I would do it. I joined veteran organizations to learn skills, make friends, and pass time. I used veteran service organizations and started building my network among others who were also in periods of change. I swapped tales over the grocery store ramen aisle with those at various points since their own Armistice Days, who could give me some words of wisdom if they’d been through it or words of commiseration if they were in the same, or worse, boats. I talked to everyone, and it ended up landing me with a business partner to start a civilian business that harkened back to my ol’ days of book learnin’ before my own Great War.

There were setbacks along the way , of course. There always are. Peace is so seldom lasting. The next war, the one with the VA, had yet to begin though all the signs were there with their continued aggression against my eBenefits and ratings appeals.

But now I have allies. I have friends that span the decades who I know will be there for me. I have more on my schedule than I know what to do with because I’m a rampant over-committer. I have medical care, a roof over my head, and food in the cats’ bellies. I have backup in both the civilian world through my work with Race2Rebuild and Present Tense, and the veteran world through Team Rubicon, Team Red White and Blue, The Mission Continues, and more. I even got started with a great organization, Battle Buds, to help others in their own post-treaty phase. I don’t have enough sleep, but I have therapy appointments to help with that because this whole thing is still an ongoing process (thanks, Headstrong).

It’s been two years since my own Armistice. I’ve been through a lot since then, and there were times when I almost gave up. But the point is the downs weren’t forever, and while they were poignant, they are no longer my focus.

I still don’t do parades this holiday, nor do I typically go out to eat those breadsticks. I do give a toast to my fallen comrades, I do remain thankful for those of us who made it home, and I do reflect.

Now if you’ll excuse me, I do believe I mentioned cake.