Take Advantage Of The Military’s Education Opportunities While You Can

This past year I received a wonderful opportunity to attend a graduate program that was funded by the military. As... 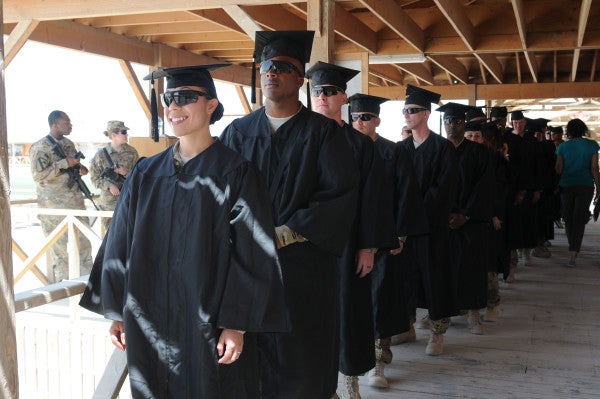 This past year I received a wonderful opportunity to attend a graduate program that was funded by the military. As I sat at graduation waiting to receive my diploma, I struck up a conversation with another member of the program who was a civilian. After chatting for a few seconds, the young man revealed that he carried nearly $100,000 in student loan debt from his undergraduate and master’s degrees combined. To say that my mouth dropped to the floor was an understatement.

Unfortunately, the amount of debt that this gentleman carried was not unusual in today's collegiate pursuit. According to Pew Research Center, approximately 37% of U.S. households headed by an adult under the age of 40 currently have some student debt, with the median outstanding student debt load of about $13,000.

This reason alone is enough to make me cringe when I hear a service member, especially a junior service member, give me excuses as to why he or she is not actively taking advantage of every educational opportunity the military provides while on active duty. I've heard it all, from I don't really like school, to I don't have time, to I'll just do it when I get out.

Keep in mind, these are not excuses from members who are serving in a war zone (although it’s not uncommon to hear of service members who do take college classes while deployed). Incredibly, I hear many of these excuses back on shore duty, a time that is usually ideal for a service member to pursue his or her education.

It pains me when military members leave the service without even completing a couple of college courses. They are leaving money on the table by not even obtaining a few of their general education requirements. And many of these members learn the hard way that getting work on the outside without a degree is very difficult. I know at least three former service members who have not found steady employment. All of them said that their lack of a degree is the main factor keeping them from getting the jobs they want.

It’s no surprise then that according to a survey conducted in February 2014, only 3.8% of college-educated Millennials are unemployed, compared to 12.2% of their less-educated counterparts. Further, the study showed that Millennials with college degrees earn, on average, 38% more than those without degrees. Overall, the study found that “virtually every measure of economic well-being and career attainment—from personal earnings to job satisfaction to the share employed full time—young college graduates are outperforming their peers with less education.”

For civilians, the rising costs of not getting a bachelor’s degree are far surpassing the tangible costs. For service members with access to a free education, this should be even more obvious.

One problem that I learned from talking with service members is that many were not aware of the sheer staggering cost of attending college in today's world. True, some will have the opportunity to use the GI Bill, which is a wonderful resource for many service members attending after they leave the service. But there are countless others who do not even investigate that option or who give up on applying for the benefit, citing confusion and frustration with the process.

From personal experience, I will tell you that I have known quite a few sailors who never bothered to take advantage of these resources for one reason or another and suddenly found themselves being forced out of the Navy for various administrative reasons. The absolute shame for many was that they had both the time and support from their chain of command to pursue education prior to their abrupt departure. For reasons that they declined to share, they just never bothered to make education a priority.

And that's why I implore everyone to use their educational benefits to the maximum extent possible. Even if you plan to serve 20 years, you will still need a bachelor’s degree for most jobs if you expect to work in the private sector upon your retirement.

The military is one of the few employers that provides a robust tuition assistance program. My civilian counterparts looked at me with envy when I told them that my education was fully funded by the Navy. All I owe is just two extra years of service, a small price to pay for the expensive education that otherwise would have cost me $40,000 out of pocket.

If you are not taking advantage of at least some of the educational benefits before you leave the service, you are leaving money on the table that has been designated solely to help you both personally and professionally. Regardless of your thoughts about education, you owe it yourself to gain as much of an advantage as you can, both while in the service and once you leave.