How Veterans Screw Up College

College is the next step for many people leaving the military. As a transition pathway, this makes a lot of... 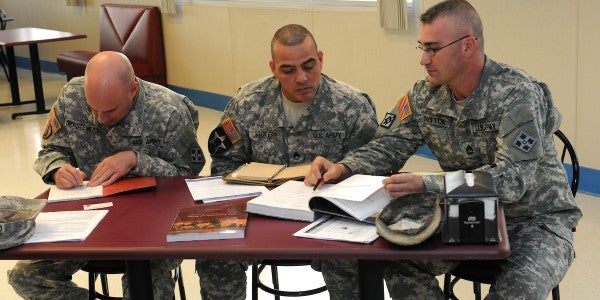 College is the next step for many people leaving the military. As a transition pathway, this makes a lot of sense. Yet somehow a lot of us get lost in the process: going to the wrong school, pursuing the wrong degree, and even failing to graduate. Many veterans fumble during their transition because they view college through a narrow lens, emphasizing a simplistic view of a degree as a “check in the box.” These folks miss out of other opportunities that could substantially improve their lives after service.

Millions of veterans have tried college in the Post-9/11 era, many of them with mixed results. We don't really know the extent of the problem — Student Veterans of America partnered with the Department of Veterans Affairs in 2014 and did the first-ever study (which is kind of crazy if you think about it) of approximately 800,000 records.

Unfortunately, the report ended up asking more questions than it answered. They tried to put a positive spin on things, but it's hard to excited about the fact that only 51.7% of us finish a chosen course of study.

We should be confident and excited about re-entering civilian life. And somehow barely half of us stumble out of college.

These subpar results are especially troubling when you consider the uber-generous new G.I. Bill benefits. The federal government spending on veterans education benefits spiked from $1.75 billion to over $4.17 billion between the 2009-10 school year and the 2012-13 school year. Overall, the VA budget has been increasing at an annual rate of 13% since 2008. That's a lot of money in short period of time, and it doesn't seem like anyone has a clear sense of what is being accomplished with these billions of dollars.

What benefits are vets getting as a result of this tidal wave of cash and support? Are we graduating college and getting good jobs? Are our professional trajectories improving? Are we more confident? Is our quality of life higher? What about our spouses and children?

The media is full of stories painting a dark picture. We often read about veterans struggling through college, flushing away their GI Bill on a worthless degree, and otherwise failing at life thanks to an uncaring and ineffective VA.

This is the fate we all seek to avoid once we leave the service. Obviously everyone wants to do well (or at least not screw up) as a civilian, so why the disconnect? With all of our useful skills and experiences, what is leading a big chunk of us down the wrong path? What is it about school that defeats us?

Part of the answer is incentives. The veteran community is incentivized, professionally and socially, to screw up in school. Yes, college is a different experience for everyone, but many people are influenced heavily by one or more of the following perspectives on higher education:

College as a “check-in-the-box.” This mentality thinks of a college degree as a requirement, nothing more. The idea is that a college degree is expected, with no regard to how it is obtained or why. In this mentality, the focus is on convenience more than anything else.

College as a skills builder. This idea is that college is an opportunity to develop new abilities. We often see this with engineering and other technical fields — sole focus on a major that sets someone up for a specific job or graduate program.

College as an access point to a network. This mentality thinks of college as a “way in” to the people who can get them a job. People in this mindset will often pick a major based on what is popular on the campus.

College as an experience. This way of thinking focuses on college as a time to consider new ideas, meet new people, do new drugs, et cetera. In this line of thinking, people are open to anything life throws at them; their major is something that interests them.

College as a brand builder. This idea focuses on college as a name they put onto a resume once in the workforce. Under this model, a person picks a career based off of what looks the best for their prospective job or based on what the media describes as an “in-demand” career.

None of these perspectives is the right one. To be useful, all of them should be used, combined with considerations of location, cost, and culture. A veteran will make a better decision when he or she uses more perspectives to critically examine all the options. This often doesn't often happen, though, as the data reveals, thanks to some unintended consequences of education and employment policy at the federal level.

Vets exploring college are immediately forced to commit to a path, before understanding the available (not to mention desirable) options. Specifically, we are required to choose academic and professional “goals” when applying for G.I. Bill benefits. This was done to ensure people graduate on time, but it also creates obstacles to switching degree tracks. No one wants to fill out a VA 22-1995 every time they decide to make a change to their curriculum plan; that's a lot of money each month. This is especially true if the VA counselors at your school are not proficient enough to navigate the process quickly.

Sloppy thinking about college bleeds over into the labor market, too. According to the Bureau of Labor Statistics, 24% of Post-9/11 veterans served in the public sector (i.e. federal, state, or local government) compared to 15% of non-veterans. Even more lopsided, 14% of those vets served the federal government, compared with 2% of non-veterans. That means younger veterans are seven times more likely than other people to work for the federal government even after leaving the military. And that doesn't even count federal contractors!

Why does this matter? Because the federal government — the largest single employer of post-9/11 veterans — encourages the “check-in-the-box” college mentality that distorts our behavior. It's all about “students and recent grads.” They even sort federal occupations by college major.

Many news articles discussing openings in the government also focus on the degree before anything else, leaving the impression that it is most important requirement.

With lots of vets heading into the federal government, it is natural they will try to snag a degree. Over time the “gravitational pull” toward federal employment will get worse. As more and more of us work for the government, we draw in our buddies, who of course think they need to use free government money (also known as the G.I. Bill) to get the degree that will qualify them for federal jobs.

Think about it. If 14% of us work for the federal government right now, how many more have applied and not been hired? And what about the vets who are going to school to get into some federal job a few years from now? There is a huge veteran population that bases its professional decisions on an expectation of future government employment. In effect it means they (think they) need to get a degree to be competitive.

Of course that's not true. The degree requirement is misleading and ultimately destructive. There are actually conversion rates for government jobs where work experience (like an enlistment) could replace a college degree. But that's not widely known or shared, either inside or outside the government.

Whether it's coming from requirements buried in the G.I. Bill or popular post-military jobs in the government, many vets struggle to think of college as anything but a check in the box. It may not be immediately obvious now with a rebounding economy, but we need to fix the misaligned incentives in the transition process. Veterans are unemployed, underemployed, and misemployed as a result of sloppy educations that were pursued without a complete examination of the available resources.

We have to do better. Organizations like Service to School and the Warrior Scholar Project are trying to fill the student veteran knowledge gap with personalized college advice. And they're free!

If you know a veteran heading to (or already in) school, pop them a note about their goals. Challenge them to think through their choices. They'll get out what they put in.