When I was in high school, I had a GPA of 1.6 and barely graduated. Nonetheless, my mother always believed... 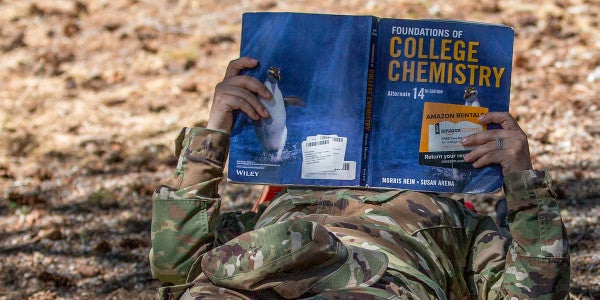 When I was in high school, I had a GPA of 1.6 and barely graduated. Nonetheless, my mother always believed that I would be the first person in our family to receive my college degree. In 2010, she passed away in a head-on collision car accident, and I became a ward of the state at the age of 16. I was out of options and resources, but knowing that I was going to make my mother’s dream a reality. In 2012, I looked to the United States Army and the GI Bill.

After five years, thousands of push-ups, work hours, and a stress-induced loss of two inches from my hairline, I was ready to finally cash in on what I worked so hard for. As I began telling some of my fellow soldiers about being on the fence between applying to New York University and Fordham University, I could see there were doubts. “NYU is no joke, you have to be smart to get into that school,” they said.

TAP wasn’t giving me the tools I needed to navigate my way into those schools. I had to figure things out on my own. I expected obstacles, but I never thought the Army’s Transition Assistance Program, the program that was meant to help me, would leave me unprepared to get where I wanted to be.

The Army TAP Higher Education Track teaches transitioning service members mainly how to obtain their benefits and gain access to veteran resources. Service members are taught how to acquire a letter of eligibility, find education funding, and use the GI Bill Comparison Tool. What it doesn’t do is shape veterans into strong candidates for top-tier institutions of higher learning. Soldiers aren’t taught who should write them a letter of recommendation, essay-writing best practices, or encouraged to know they can actually get in.

The TAP curriculum should be expanded to empower veterans to maximize their full educational potential and generate informed consumers of education with more emphasis on essay writing, letters of recommendation, and navigating education options. Where gaps in the curriculum exist, veterans should be connected with education-mentoring veteran service organizations likeService to Schools.

According to the latest Labor Department report, the unemployment rate for veterans aged 18-24 in January 2018 was 12.7%. These are recently service members fresh out of the military and TAP program. Expansion is a common-sense way to combat veteran unemployment by empowering veterans to attend the schools with the highest post-graduation success rates. Top-tier universities create veteran CEOs and congressional members. Underperforming universities create longer lines at the Department of Veteran Affairs Vocational Rehabilitation Offices.

Underrepresentation in top schools stems further than just TAP, but also from culture — both inside and outside the military. Among service members, college is sometimes viewed as a tool to gain promotion points. It is to no surprise that service members undermine the value of a quality education and fall victim topredatory practices of universities out to exploit them of their GI Bill benefits.

This isn’t to discourage veterans from attending a local college back home. Veterans should go to a particular school because they want to, and not from some misguided feeling of inadequacy to apply to the best public and private schools. TAP is not giving veterans the ability to make an informed decision between the two.

With such a tenacious drive, it’s time to provide veterans with the information they need to get where they should be — information and assistance that the Transition Assistance Program could provide.

Wesley Wilson served in the U.S. Army from 2012-2017 as a military police officer and earned his associate’s while in the service graduating with honors from American Public University. He is currently pursuing a B.A. in organizational leadership at Fordham University, and is is a High Ground Veteran Advocacy Fellow focused on policy improvements to the military-to-civilian transition experience.