5 Rules To Live By When You Leave The Military, According To A Former NCO

So the time has come where your disillusionment for continued military service trumps your misguided teenage visions of honor, conquest,... 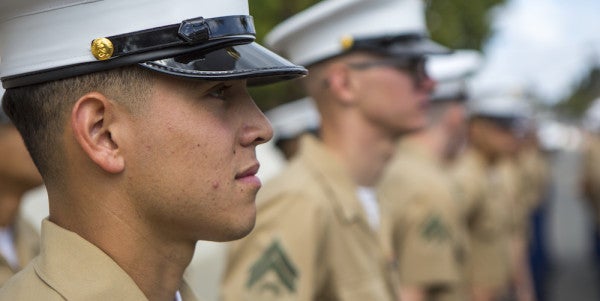 So the time has come where your disillusionment for continued military service trumps your misguided teenage visions of honor, conquest, and becoming the next Maverick. The idea of standing watch on the U.S -Mexican border or engaging in Byzantine nation building offers no appeal. You’ve made up your mind. It’s time to get out.

Rest assured you’re not the only one to make this leap of faith into the massive grey space that is civilian society. Here are five steps to get you through military transition boot camp.

First, nobody cares that you’re a veteran. Sure, Applebee’s offers free meals on Veterans Day and Corporate America has highly marketed veterans hiring initiatives. But the reality is that veterans are nothing more than a metric for corporate social responsibility campaigns and good PR. Once you do get through the door, it’s incumbent upon you to check your ego and your war stories at the door. Again, most people don’t care and many are intimidated or resentful of your presence.

Second, don’t waste your Post-9/11 GI Bill. One of the great public policies ever enacted in Congress is the educational benefits package for veterans, spouses, and their dependents. I get it, school isn’t for everyone, but it’s a big world and easy to drown in it if you don’t diversify your academic pedigree. Unless you possess a marketable vocational trade skill like welding, plumbing, or coding, a bachelors degree is the baseline standard for employment. Keep in mind you’re competing with younger millennials and Generation Z people who’ve grown up with iPhones and Mocha Lattes. As we transition to a world dominated by the Internet of Things, AI, and Quantum Computing, your future requires an education just to avoid falling victim to automation. Pursue your degree and choose your education wisely. I recommend STEM.

Third, learn Microsoft Excel. Sounds kind of strange, but trust me, learn it. As a military public affairs officer, I was trained with communicating my military service’s story to the American people on live television and radio. I was trained to articulate and translate military jargon in easy to digest nuggets in press releases or magazine articles. I never learned Excel. I’m currently a Management Consulting Analyst where Excel is the Lingua Franca of Corporate America. Learn Excel. I repeat, learn Excel.

Fourth, use the VA Loan to buy a house. Jerome Powell, the new chair of the Federal Reserve, has announced incremental increases in interest rates. This means buying a home is more expensive than it was a year ago. The VA Loan enables veterans to buy a home, with no money down. This is a significant advantage over our civilian peers who are often required to put down up to 20% as a down payment. It’s easier to succeed in this transition if you have a comfortable place to call home.

Lastly, stay informed and stay involved. Read the newspaper, read books, but whatever you do, don’t disappear from society. The voices and perspectives of military veterans are needed more than ever. Few people who haven’t served really know what words like honor, respect, devotion to duty, commitment, courage, or fortitude mean. We’ve lived it. Your active involvement in society is critical. As the saying goes, if not me, then who?

Christopher Evanson holds the U.S. Coast Guard chair on Long March’s Council of Former Enlisted. He holds a Master of Professional Studies in Public Relations and Corporate Communications from Georgetown University and a Bachelor of Arts in International Studies from the American University.