Once Homeless, This Navy Vet Says She’s Competing For Maxim’s Cover As A Way To Help At-Risk Youth

There are many paths to the military. For Janae Sergio, who became homeless during her sophomore year of high school,... 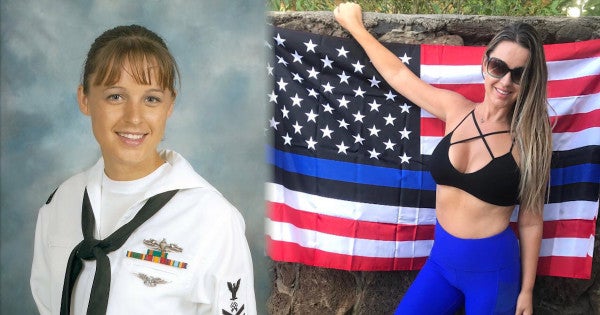 There are many paths to the military. For Janae Sergio, who became homeless during her sophomore year of high school, joining the Navy when she was 18 was a way off the streets. Years later, when the 36-year-old Navy vet heard that Maxim’s Cover Girl competition would be donating a portion of the proceeds to a charity that helps build homes for wounded veterans, she decided to give it a shot.

“I entered it not thinking it was going to go anywhere. I figured I had no chance,” Sergio, who’s currently second place in her group, told Task & Purpose. “But the charity that they’re giving back to is the Jared Allen Homes For Wounded Warriors, and for me, that resonated really closely, and I felt like it was calling me to be part of the contest.”

Should she win, Sergio says she’ll donate some of the $25,000 in prize money to Fisher House, which helps families of wounded vets, and to Hale Kipa, a local charity aimed at helping at-risk kids in Hawaii, where she lives. Sergio became homeless when she was 15 and spent the next several years on the streets and in homeless shelters in Los Angeles, so the idea of helping out those in need is deeply personal, she said.

“I was living in a homeless shelter called Covenant House in Los Angeles at the time, and was on a transition program where if I worked and saved enough money they would help me transition to sustainable living,” Sergio told Task & Purpose.

“When I became homeless, I pretty much missed my entire sophomore year of school just trying to figure out what to do and trying to get some stability in my life,” she said. “I was trying to go to school, but then I’d have to leave school and go to work. I was really struggling at getting my high school diploma.”

When she was 18, a friend introduced her to a Navy recruiter and she thought “why not? I didn’t have anything to lose. I didn’t know what my future held. So why not just give it a go? So I did, and it changed my life forever.”

In 2000 she enlisted in the Navy with a waiver, and within a year she was on her first deployment aboard the USS John C. Stennis off the coast of Pakistan in support of combat operations in Afghanistan in 2001. And it was during this time that she completed her GED, she said, joking that the FPO address on the letter she sent in probably raised some eyebrows.

After leaving the Navy in 2008, Sergio went to school on the post-9/11 GI Bill, earning a bachelor's degree in business management from the University of Phoenix, and started a family. In the years since, she’s become a part of the growing Instagram modeling community, and so far has more than 52,000 followers, some of whom are veterans as well. And she says the outpouring of support from the military community is what’s gotten her this far.

“Before I actually became homeless, I had always wanted to be in modeling, and I had always loved the fashion business,” Sergio toldNavy Times.

But she said she never expected to make it as far as she has, telling Task & Purpose that she's “still in shock, every day, like ‘is this really happening?’”

Prior to joining the Navy in 2000, Janae Sergio had aspired to be a model, a goal she's now pursuing.Janae Sergio

Though she’s left the uniformed life behind, Sergio has remained connected to the military, partly through her work as an assistant business and financial manager for the U.S. Pacific Fleet, and partly because of that one overused SNCO’ism: Esprit de corps.

“I’d like to get a sailor on the cover,” Sergio said of the competition, which is accepting votes until Nov. 8. “When you look at the other forces like the Army or Marines, or you think of a badass woman, and you look at their uniforms it’s tactical, but sailors can be pretty badass, too. That’s kind of my goal — finally get that first Navy girl out there.”

You can vote for Janae Sergio in the Maxim competition here.