“This was not one of those cases the military could sweep under the rug.” 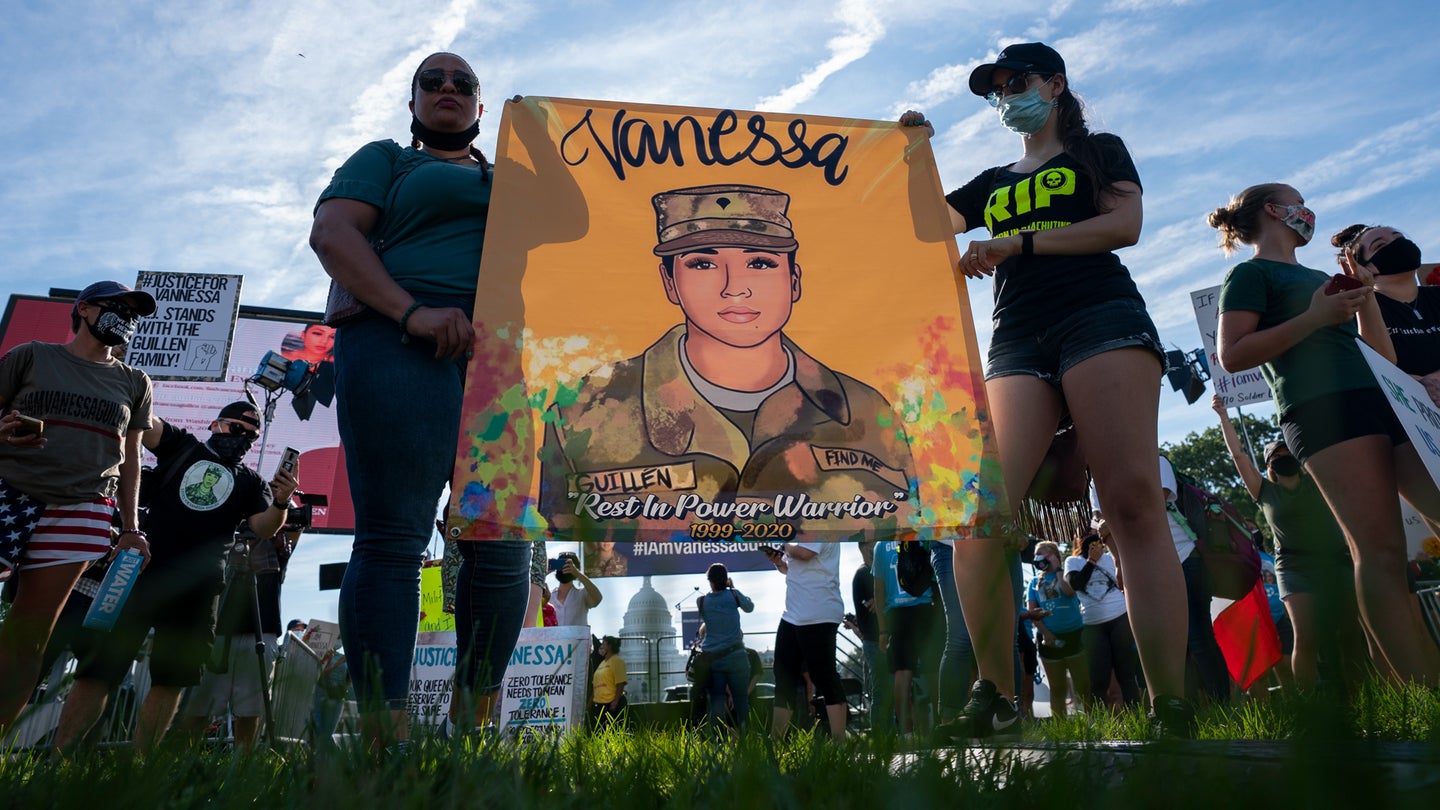 Supporters of the family of slain Army Spc. Vanessa Guillen gather before a news conference on the National Mall in front of Capitol Hill, on July 30, 2020, in Washington. (Carolyn Kaster/AP Photo).
SHARE

More than two years ago, the country watched as a desperate family searched for their daughter who seemed to have disappeared into thin air from Fort Hood, Texas. On Nov. 17, Netflix will show that family’s fight in a new documentary, I Am Vanessa Guillén.

Guillén was a 20-year-old Army private first class when she went missing in April 2020, inexplicably leaving her car keys, wallet, and military ID card behind. For nearly three months, her family and supporters rallied and protested, demanding answers from the Army and calling for change as service officials worked to discover what happened to the young soldier.

The world would eventually learn that another soldier brutally murdered Guillén in her unit’s armory on-post, drove her remains out to a river roughly 20 miles away, and with the help of his girlfriend at the time, dismembered Guillén’s body and buried her in three separate, shallow graves.

The revelation of what happened to Guillén set off a cultural reckoning across the Army, leading to further investigations and studies into the culture at Fort Hood, a series of suspensions and firings of Army leaders at the base, and new initiatives that the service is still working on completing today.

The internal review that followed the outcry over Guillén’s death found holes in the Army’s criminal investigation division, the service’s Sexual Harassment/Assault Response and Prevention (SHARP) program, and its public affairs approach to crises.

The fallout from Guillén’s murder also reached beyond the Army; the Defense Department introduced significant changes to the way the military handles sexual harassment and assault investigations. In January, portions of the I Am Vanessa Guillen Act were signed into law by President Joe Biden.

As Netflix’s documentary shows, behind those changes was Guillén’s family, who refused to take no for answer and forced the military to confront what happened to their sister.

“This was not one of those cases the military could sweep under the rug,” Rep. Jackie Speier (D-Calif.), chairwoman of the House Armed Services Committee’s Military Personnel Subcommittee, says in the trailer.

The documentary follows Guillén’s sisters, Lupe and Mayra “as they carry her name from protests in the streets to the halls of power in Washington, D.C., and offers a behind-the-scenes look at their tenacious pursuit to change a deeply rooted, controversial military justice system,” according to the film’s summary. Natalie Khawam, the Guillén family’s attorney, said they went forward with the film to show “how movement of normal people can make profound change.”

“I hope this documentary inspires people all over the world to seek and demand justice,” Khawam said.

The documentary also appears to provide an inside look at who Vanessa was — not just the soldier, but the woman who was loved by her family and had a bright future ahead of her. As her sister Lupe told Task & Purpose in 2020, Vanessa was eager to finish out her time in the Army and go to Texas A&M to study chemical engineering. She wanted to get married and start a family; she was “nice and respectful” to everyone she met, Lupe said, so it was no surprise that everyone seemed to love her.

And because her family knew her so well, it was obvious to them when her mood began to shift. As her sisters say in the Netflix trailer, Vanessa started having trouble sleeping and losing weight, and it was clear “something was wrong with her the few months after she was stationed at Fort Hood.”

Vanessa later told her mother that she was being sexually harassed by a superior at work, though she didn’t provide more details than that. Her mother urged her to “rip up her [Army] contract in front of them and come back home,” Lupe told Task & Purpose, but Vanessa insisted she could handle it.

“She told my mom, ‘I can’t report it, I’ve seen other girls pass through the same situation and they ignore them. They say that they’re lying. They don’t listen to them,’” Lupe recalled.

It wasn’t long after Vanessa went missing that her family went public with their sister’s experience. The news that Vanessa was being sexually harassed kicked off a national of service members sharing their own stories of harassment and assault under the hashtag, #IAmVanessaGuillen.

It wasn’t until April 2021 that the Army confirmed Vanessa had in fact been harassed by a superior noncommissioned officer in her unit, and though she “informally reported” the harassment, her supervisor “failed to report the harassment, and other leaders failed to take appropriate action,” according to a 2021 report.

The soldier who murdered her, Spc. Aaron Robinson, 20, later shot himself before authorities could arrest him. Robinson’s girlfriend, Cecily Aguilar, is facing charges for assisting Robinson in disposing of Vanessa’s body.

And while it may seem the military has moved on from the 2020 crisis at Fort Hood, the Netflix documentary is sure to remind us why this mattered, and why it shouldn’t be forgotten.

“This is not a Republican or Democratic issue. This is not a race issue,” Lupe says in the trailer. “This is a human issue, so it should be everyone’s issue.”

Updated: This article was updated at 5:21pm on Nov. 4 to include comment from the Guillén family’s attorney, Natalie Khawam.