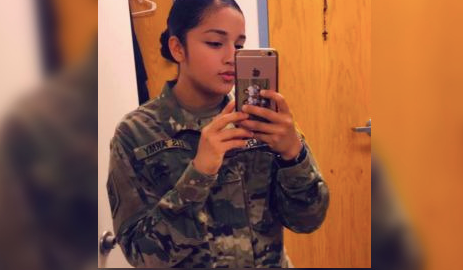 The unidentified human remains found last week have been identified as those of Army Spc. Vanessa Guillen, her family's attorney confirmed on Sunday.

“On Friday July 3rd, the Army confirmed that the bones, hair and other remains that were found are Vanessa Guillen,” Natalie Khawam said in a statement to Task & Purpose. “We are at a loss for words. Our country has lost a beautiful young soldier because the system is broken.

“We demand a Congressional investigation!”

The news was first reported by the Washington Post's Alex Horton. Army Criminal Investigation Command has not yet responded to request for comment.

The remains were discovered while authorities searched for Guillen who had been missing since April 22.

Khawam said on Thursday that she believed Guillen was allegedly killed “with a hammer” by Army Spc. Aaron David Robinson the same day she went missing. According to a Department of Justice press release, Robinson then called a Cecily Aguilar, the “estranged wife” of a former soldier, to help him “dispose of” Guillen's body.

When authorities confronted Robinson last week, he “displayed a weapon and took his own life.“

Aguilar, however, was taken into custody and has been charged with one count of conspiracy to tamper with evidence in connected with Guillen's alleged murder.

“At first they tried to set her on fire, but she wouldn’t burn. Then they dismembered this beautiful U.S. soldier’s body with a machete,” Khawam told Army Times of Robinson and Aguilar.

Army leaders called for justice on Friday, calling Guillen a “valued member of the Army team,” and saying they are “committed to finding out how this happened.”

Though Guillen's family said that she was being sexually harassed by a superior at Fort Hood, Army investigators said last week that they haven't yet found evidence that Robinson was sexually harassing her.

Last week the Army opened an investigation into Fort Hood's Sexual Harassment/Assault Response and Prevention (SHARP) program, sending a seven-person team from the U.S. Army Forces Command (FORSCOM) Inspector General. The investigation was looking into any “potentially systemic issues” within the program, and how command climate is “supportive of soldiers reporting incidents of sexual harassment and assault.”