5 Ways To Be More Effective At Networking

Networking is the single most important skill to help ensure that you get a serious look from hiring managers in... 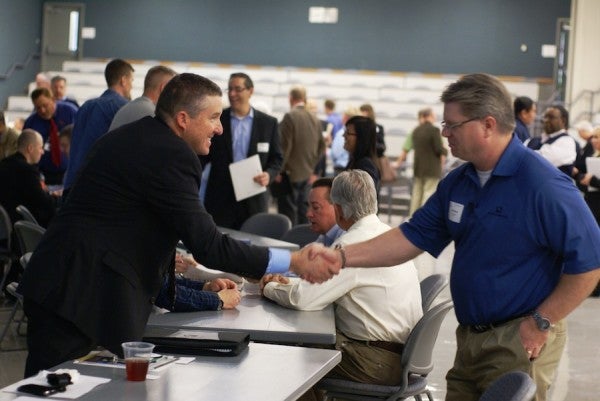 Networking is the single most important skill to help ensure that you get a serious look from hiring managers in a weak economy. Unfortunately, it is also somewhat misunderstood. On the surface, networking may just look a lot like meeting and having conversations with people who do stuff that interests you — or worse, that doesn’t interest you — and there’s some truth to that. However, in the purest sense, networking is about building rapport, having substantive conversations, and finding commonalities with other professionals in a limited amount of time. Most importantly, when done properly, networking is neither sleazy nor forced. With practice, you can explain yourself to people in compelling ways and develop the starting points for new professional relationships in only a few minutes.Here are some key points that I wish I had known when I started out on my transition into the civilian economy several years ago:

This is obvious, but also important. As you transition into your civilian career, you need to think carefully about what you want from your professional and personal life. The more that you understand where you want to go with your life, the better that you can explain yourself to people and the easier it will be for them to help you achieve your dreams. Don’t panic if you aren’t sure exactly what kind of job is right for you. Start instead with what you do know, such as where you want to live, or what kind of environment you want to work in.

Related: How to make use of the veteran network.

Know the organizations that can help.

If you’re on this website, then you’re already smarter about this than I was when I began my job search. There are dozens of organizations, such as Hirepurpose, and individuals dedicated to helping veterans transition successfully into the civilian world. Even if you feel a bit lost about how to start, these resources will help you learn how to get your foot in the door somewhere.

It’s important to know what is appropriate to ask for when you’re speaking with a new professional connection. It is inappropriate to directly ask for a job, especially with someone you don’t know well. However, it is perfectly acceptable to inquire about openings, and ask for suggestions in the application process. Most people will want to help if they think they can, you just have to try to avoid putting them on the spot.

The people you most want to speak with are also usually the busiest people. You need to be able to build a connection during a professional discussion with someone in less than five minutes. In some situations, you might need to be able to approach someone in the hall on the way out of an event, introduce yourself, and establish a basic rapport with them before you even get outside. This may sound artificial and contrived, and it is, but that really misses the point. If you know who you are, what you want, and what kind of a follow-up conversation you could foresee with someone, it shouldn’t take long to explain that and set up something over coffee for next week.

In this sense, networking is a bit like dating. To do it well, you need to be charming, interesting, and engaging without turning people away by being needy or giving the impression of desperation. In general, just try to be your best self and build enough of a connection with someone to serve as the basis for following up via email later. This is where it might help to print out or order a few dozen business cards; if you’re nervous, busy, or shy, just offer someone your card. Nine times out of ten, if they have a card, they will offer it to you in return. From there, it is simply up to you to contact them and explain how you hope they can help you learn about an industry, job opportunity, an unusual hiring process, or their own professional development strategy.