Chairman Of The Joint Chiefs’ Office: Do These 5 Things When Transitioning To Civilian Life

Editor’s Note: This is part one of a two-part series from the Chairman’s Office of Reintegration. In February of this... 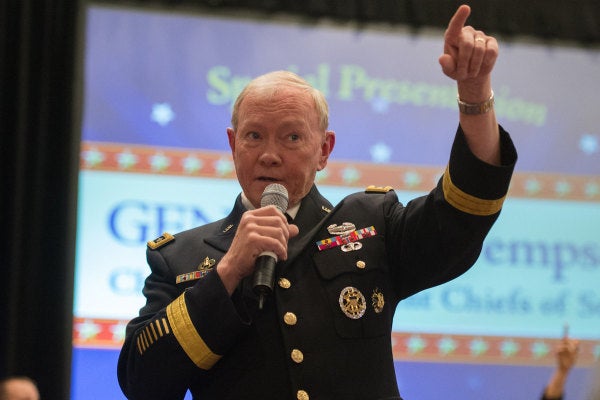 Editor’s Note: This is part one of a two-part series from the Chairman’s Office of Reintegration.

In February of this year, each member of the Joint Chiefs of Staff signed a letter to all who have served since Sept. 11, reminding service members that our nation “needs your experience, intellect, and character,” and charging them to “help guide our country’s destiny.” The senior-leader emphasis on continued service underscores the importance of each service member’s successful transition out of the military and reintegration back into the civilian community.

The Department of Defense recently redesigned its Transition Assistance Program to provide contemporary, relevant, and mandatory information, tools, and training to ensure service members are prepared for civilian life. Across the civilian realm, public and private organizations at the federal, state, and local levels stand ready to assist veterans and their families as they return to communities.

Despite many public and private efforts to assist in the transition out of uniform, successful reintegration can be difficult for many of us. In fact, a recent University of Southern California School of Social Work survey of post-9/11 veterans found that more than two-thirds reported difficulty in “adjusting to civilian life.” In another survey conducted by Blue Star Families in 2014, more than half of all veterans surveyed reported that their transition to civilian life was difficult.

The Chairman’s Office of Reintegration spent the last two years studying the successful reintegration of veterans and their families back into the civilian community. Engaging hundreds of public and private entities dedicated to embracing veterans and their families, we collected lessons common to successful transitions. First and foremost, we realized that successful reintegration is an individual responsibility, one that requires understanding, planning, and deliberate execution — something familiar to all of us in uniform.

What follows are recommendations to enable transitioning service members and their families to do just that: understand the field, craft and execute a realistic plan, and successfully reintegrate into a civilian community ready to embrace the values and skills that characterize military service. We also offer similar recommendations to leaders in the immediate chain of command to help them recognize that successful transition and reintegration are as critical to our country’s future as they are to our future force.

There are five steps we recommend every transitioning service member consider as they contemplate the move out of uniform: plan, rehearse, ask for help, network, and manage expectations.

1. Take responsibility for your own transition and make a plan.

A significant amount of your transition planning should be spent thinking through what you want to be and do as a civilian. While your veteran identity will remain a key aspect of your civilian experience, it should not define you. Identify your personal and professional goals as a civilian and identify your next purpose. With your goals in mind, assess your weaknesses and skill gaps, and develop a viable plan to shore them up through additional education and/or training.

We’ve all learned to “see and assess” the environment. In this case, invest time to research employment or education opportunities in the geographic regions you desire. Use the Internet to identify the many government offices or private, non-profit organizations that address veteran needs in or near your likely destination. The Department of Labor American Job Center website is a great resource to research career and communities you are considering a move. The DoD’s Transition Assistance Program curriculum is also accessible to all service members and their spouses, at any time to support long-term career planning.

Self-identification is critical. Those living in the community you return to will not know you’re a veteran unless you identify yourself as one. Local- and state-level organizations, such as your state’s office of veterans affairs, may not know that you’re coming. Contact them, share your contact information and timeline, and determine if one or several of those organizations can help you. Start this process at least a year out. Visit the transition office at your installation to understand the career readiness standards and to take full advantage of all that the Transition GPS (Goals, Plans, Success) curriculum has to offer. And make sure you coordinate with your chain of command to de-conflict your transition training schedule with your unit’s requirements schedule.

2. Rehearse your interaction with the civilian sector.

It’s too late if you find yourself unemployed, wishing you had paid more attention to the transition classes. Train for this life-changing event like you do for any military mission. Practice for interviews, and in doing so, prepare to convey with confidence the skills and traits you’ve learned in the military. Many transitioning service members rely on skills-translation software to help them explain what they offer to a potential employer. There’s no software program that can adequately describe what you’ve learned and how you can contribute to a specific employer. Be prepared to champion yourself — something you might not have done in uniform, because you’ve been asked to place the unit and the mission first. You must now learn to be your own best advocate. These are difficult but necessary skills, and you’ll only get better by rehearsing.

3. Despite your natural reluctance, ask a civilian for help.

The military has conditioned you to regularly ask what you can do for the unit. Transitioning to the civilian world is different. It requires you to reach out and ask a civilian to help you. Ask a civilian to serve as your mentor, someone who is familiar with a field that interests you or a location to which you might relocate. In the military, you always had a team leader or immediate supervisor, someone who worked hard to ensure you didn’t fail. Reintegration is a challenging mission, one made easier with a civilian “team leader” to help you navigate. By all means, ask a civilian to help you with your resume. Civilians regularly update their resumes. In all likelihood, the only resume you’ve written is the one mandated during the service transition process. Who better to ask for help transitioning to the civilian sector than someone who is already there?

Lastly, don’t shut down. We’ve met veterans who have asked for help, and disappointed with the first response, seemed to quit. If you treat transition and reintegration with the same mentality you used to accomplish demanding missions in uniform, you’ll meet with success.

4. Networking is important in the civilian sector; embrace it.

The mission-focused military mindset doesn’t always lend itself to appreciating social or professional networks outside the immediate organization. In the civilian sector, however, networking is an important reality and something many employers consider when comparing potential employees. Employees with broad personal networks often have a higher potential for contribution given their access to different expertise and other perspectives. To expand your network, learn to use social media to capture your network, but remember to do so responsibly. Be judicious, however; anything you post is a permanent record that a potential employer might review. Build a thoughtful profile on Facebook or LinkedIn that shows an employer that you’re someone they want on their team. Beware the profile that shows immaturity in the form of inappropriate pictures or links, harsh comments, or worse.

5. Don’t expect to make as much or supervise as many without first proving yourself.

One of the most common complaints we’ve heard from civilian employers is that many transitioning service members expect a direct correlation between their military pay and responsibility and the pay and responsibility in their first civilian job. Such an expectation is unreasonable. Recognize that you are starting over. We all will need to develop a reputation in the civilian world just as we did in the military. Many successfully transitioned veterans have told us that they took a pay cut and supervised far fewer people when they first transitioned into the civilian sector. Once they established their reputation in their new organization, they progressed at a much faster rate than non-veterans, but they had to earn the trust and confidence of their supervisors and fellow employees first. None of us would be comfortable with a shift manager joining the military as a squad leader or a civilian CEO donning a uniform and immediately commanding a destroyer. We would want them to prove their expertise first; our civilian supervisors will expect the same of us.