The Army Handed Off War Dogs To Whoever Would Take Them Fast, But It’s Okay, They’re Sorry

After a Department of Defense Inspector General report found the Army mistreated military working dogs after they returned to the... 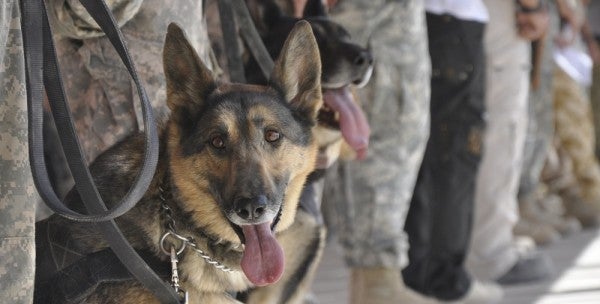 After a Department of Defense Inspector General report found the Army mistreated military working dogs after they returned to the states from their deployments, the service announced Monday that, well, yeah, you got us, we fucked up. Trained to sniff out improvised explosive devices, the Army’s military working dogs and their handlers deployed to battlefields abroad, forged bonds in training and under fire, and saved lives by identifying roadside bombs. But when it came time for the service to shutter its bomb-dog program, some of those canines returned to the states and were forgotten.

The March 1 report found that leading up to the closure of the Army’s Tactical Explosive Detection Dog (TEDD) program, which ran from 2011 till 2014, the service mismanaged its handling of how the animals were adopted, or transferred to other government agencies.

The report paints the closure of the TEDD program as a frantic scramble to move military working dogs out of the service as quickly as possible — and at times, without any regards to who was adopting the dogs:

A member of the kennel staff reported during a group interview with DoD OIG team members that the Army’s disposition of the TEDDs was uncoordinated and that it appeared the Army’s priority was to get rid of the dogs as quickly as possible. Kennel staff familiar with the MWD adoption process expressed concern over what they observed. Staff members explained to our team that the adoptions were unplanned and rushed and that “some individuals seeking to adopt a dog were not capable of handling these types of dogs.” One source described the adoption process as “organized chaos.”

Additionally, the handlers who wanted to adopt the dogs they served with downrange weren’t informed that they were allowed to do so, and what’s more, that they actually had priority in adopting their dogs.

The report also found that prospective owners weren’t screened prior to adopting the dogs, which led some animals with histories of biting — ahem, it’s a war dog — to be paired with families with children. One dog described as having “canine PTSD” was paired with a family with children, because there was no record indicating whether or not it might be aggressive — the dog was transferred to the Sheriff’s department nine days later.

Other dogs were handed off to owners who were either unable, or lacked the resources, to properly care for them.

And, in one particularly egregious case, 13 dogs given to a private company for use as veterans’ service dogs were later abandoned at a Virginia kennel, the Washington Free Beacon reports.

In a statement provided to Reuters, Army spokesman Maj. Christopher Ophardt said “The Army concurs with the DoDIG (Defense Inspector General) report and is complying with” their recommendations — which include planning ahead of time for a dog’s adoption, and generally not being an asshole.

CORRECTION: This article has been corrected to reflect that 13, not two, Tactical Explosive Detection Dogs were left at a Virginia kennel. (3/9/18; 4:20 pm)