The 7 Most Alarming Challenges Facing Today’s Marine Corps, According To Its Own Officers

I’d missed several recent issues of the Marine Corps Gazette, so read them in a bunch when four recently arrived... 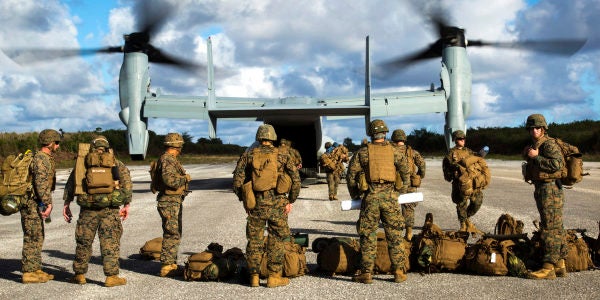 I’d missed several recent issues of the Marine Corps Gazette, so read them in a bunch when four recently arrived in the mail.

When I did, I impressed by how willing the editors are to run tough criticism of today’s Marine Corps.

I can only imagine the commandant sitting down to read the Gazette in his easy chair one evening and having his hair standing on end after reading an article or two. He might think he could relax when he got to Col. Jonathan Dunne’s article recommending that Marines prepare for foreign advisory duty by reading Harvard Business Review articles on what makes a good consultant.

But then he’d get to the paragraph in which the colonel states that “Arguably, we do not do enough to help advisors-in-training to understand or appropriately develop specific elements of their character, creativity, and communications so as to be best prepared to advise a foreign partner.”

(Only one stinker was an odd sentence, on page 65 of the December issue, in which Brig. Gen. Kevin Stewart states that “having a spouse who works full-time does provide me with a unique perspective.”

That stopped me. How is that “unique”? Two full-time jobs are the case for close to half of all American families. (Perhaps he meant Marine general officers, for whom I haven’t seen stats.)

Not all of these guys are necessarily right in their criticisms and proposed solutions. Rather, my point is that they are asking hard questions in clear ways, and that is good to see in a professional military journal.

I hereby commend the editors of the Marine Corps Gazette for operating in the highest and finest traditions of professional military journalism.